Having looked at the trends in the mobile market in the coming months, let's look at the performance list for August, starting of course with the much-anticipated flagship ranking. It should be noted that figures in this ranking list were calculated from August 1 to August 31, 2022. The results in the ranking list are average scores instead of highest scores, and thus more representative. 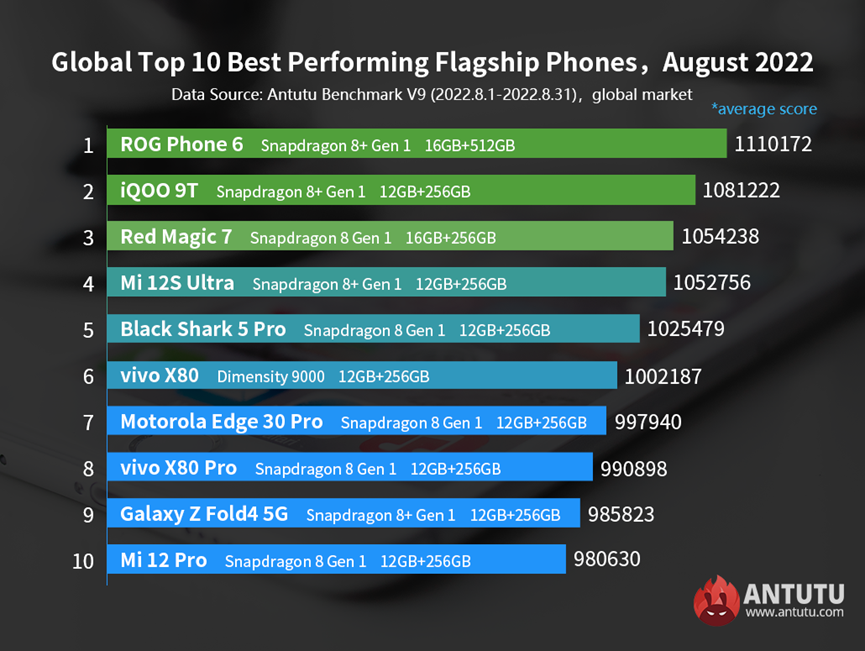 As one of the first brands to make a gaming phone, ROG's phone configuration has always been very powerful. The almost flawless hardware configuration makes the ROG Phone 6 unsurprisingly at the top of the list.

However, the user base of gaming phones remains small. Despite the strong performance of ROG, the market response to it has been average, few users seem to choose it for the sake of playing mobile games.

The ROG Gaming Phone 6 is the second Snapdragon 8+ Gen 1 phone this year, featuring a 6.78-inch Samsung E4 AMOLED gaming screen, support for 165Hz refresh rate, default 120Hz in daily use, touch sampling rate upgraded to 720Hz, the total end-to-end input latency is 23ms, HDR10 certification. The parameters look basically the same as its predecessor, so there should be no upgrade.

The back of the phone has a new design style, continuing the ROG colorful personality window and the ROG logo lighting effect, increasing the overall recognition. Both the hardware and the appearance are very recognizable.

iQOO is a young brand that is growing very quickly. The avant-garde design attracts the attention of young consumers. The imaging algorithms inherited from Vivo coupled with more competitive hardware configurations make iQOO more of a true flagship series rather than a sub-brand of Vivo.

With Snapdragon 8+ plus LPDDR5 and UFS 3.1, iQOO is top of the line in almost all of its specs, including an ultrasonic fingerprint scanner and 120W fast charging. According to official claims, the iQOO 9T can charge a 4700mAh battery to 50% in 8 minutes, which will undoubtedly change people's usage habits.

This doesn't mean that the Red Magic 7 is obsolete though, on the contrary, the Red Magic 7 with its previous generation chip beat the Snapdragon 8+ device from Xiaomi and came in at number three on the Android flagship list.

Users of the Red Magic 7 are acknowledging its performance while also complaining about its overheating issues, it even reached a high temperature of almost 60 degrees Celsius while running the Genshin Impact. Strangely enough though, even with such severe heat issues, the performance of the Snapdragon 8 in the Red Magic 7 still doesn't decrease but continues to deliver full power.

The top 10 flagship devices are basically all powered by Qualcomm Snapdragon processors, with only one from MediaTek, the Vivo X80, powered by the Dimensity 9000. However, the Dimensity 9000+ has not yet been able to appear on the list, its future performance is very promising.

The top 10 in the sub-flagship ranking are still mainly MediaTek-powered devices, with the top few using the Dimensity 8100 processor. The list also shows the obvious difference in performance between the Snapdragon and Dimensity sub-flagship processors.

The Realme GT Neo 3, the new No.1 on the sub-flagship list, has a surprisingly high score. It reached 800,000 points with its Dimensity 8100 processor, nearly 100,000 points ahead of the Snapdragon 870, which no other current Dimensity 8100 model can achieve.

The phones in second and third place actually belong to Xiaomi's sub-brands. Xiaomi is currently doing its best to become a rival to Apple and Samsung, while its two sub-brands remain in the mid-range and sub-flagship lists.

Next up is the mid-range phone performance list, with all of the top 10 phones powered by the Snapdragon 778G processor. 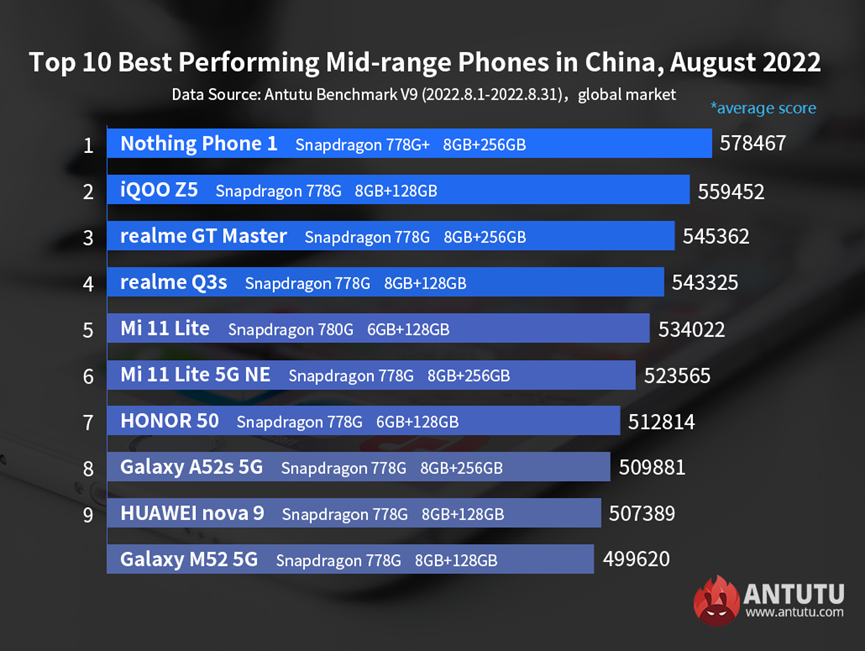 At the top of the list is the recently popular Nothing Phone 1. Although its performance is not powerful enough, the Nothing Phone 1 is getting a lot of attention for its unique appearance. If its quality issues can be resolved, it should become an option for more users.

In second place is the iQOO Z5, which is also very popular thanks to its ultra-low price and higher specs than its rivals. Apart from the lack of NFC, it is almost the perfect mid-range phone.

Third place goes to the realme GT Master from realme, which, as a Master product, does have a flagship quality that is not often seen in mid-range phones. Unlike the nothing phone 1, which is very close to Apple's design, it is a full-on Android phone in appearance.

The performance of the Snapdragon 778G processor is capable of meeting daily use, but is inadequate for larger games and more performance-demanding applications.

The competition among the mid-range models is mainly in terms of battery life and appearance. The appearance of the Nothing Phone 1 can also be very competitive in the flagship Phone market.

The running score is only a reference for users when choosing a phone they are not familiar with, it does not represent the actual experience. If you are considering changing your phone, you can refer to the score and try it out in a mobile phone store to see if it really matches what you have learned.

That's all for the global Android phone performance list in August 2022.