In early July, Xiaomi debuted both Qualcomm Snapdragon 8+ Gen 1 and MediaTek Dimensity 9000+ at its launch event, which were equipped in the Xiaomi 12S series and Xiaomi 12 Dimensity Edition respectively. This means that there will be a lot of new Android phones coming out in July and August.

Due to the pandemic and severe inflation, users have had to lower their demand for new mobile phones, yet the rate at which handset makers are releasing new phones has not decreased at all. Snapdragon 8+ Gen 1, Dimensity 9000+, 1-inch camera sensor, 200W fast charging and ultra-narrow bezels are all terms that have stimulated the mobile phone market, and given new phones a more competitive edge.

The first two generations of Qualcomm's Snapdragon 8 series had overheating problems, thanks to which MediaTek managed to enter the flagship market of major Android phone manufacturers with its Dimensity 9000 released last year, giving consumers an additional choice when buying a flagship phone.

However, MediaTek's excellent performance in the first half of the year did not continue in the second half. At the same launch event, the Qualcomm Snapdragon 8+ Gen 1 and the Dimensity 9000+ seemed to be a return to the situation of previous years, with Qualcomm Snapdragon monopolizing the flagship phone market and MediaTek Dimensity only being able to dominate the sub-flagship phone market.

Let's take a look at the specific data of the July ranking list below. It should be noted that figures in this ranking list were calculated from July 1 to July 31, 2022. The results in the ranking list are average scores instead of highest scores, and thus more representative. 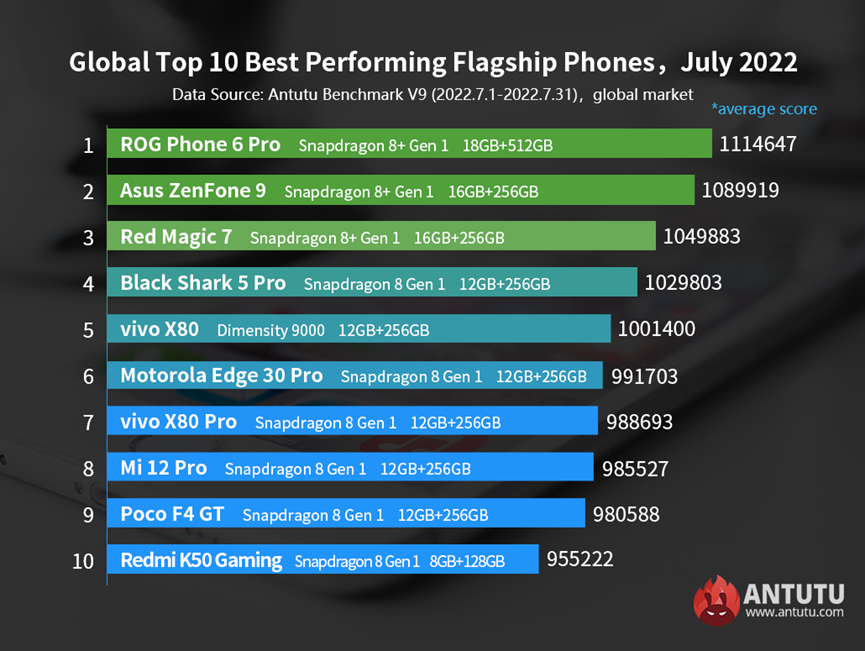 Gaming phones still unsurprisingly top the list. Because of the high performance requirements, gaming phones have always scored higher than their competitors.

The ROG Gaming Phone 6 is the second Snapdragon 8+ Gen 1 phone this year, featuring a 6.78-inch Samsung E4 AMOLED gaming screen, support for 165Hz refresh rate, default 120Hz in daily use, touch sampling rate upgraded to 720Hz, the total end-to-end input latency is 23ms, HDR10 certification. The parameters look basically the same as its predecessor, so there should be no upgrade.

The back of the phone has a new design style, continuing the ROG colorful personality window and the ROG logo lighting effect, increasing the overall recognition. The camera module fits in with the back design and is full of gaming elements. The ultrasonic shoulder button is also retained, allowing for multi-finger operation when playing games, which is one of the unique advantages of a gaming phone.

Surprisingly, this small-screen flagship phone with a limited size beats a gaming phones with a built-in fan. The Asus ZenFone 9 does score higher than the Red Magic 7, this should be attributed to its Snapdragon 8+ Gen 1 processor.

One of the few flagships with a small screen, the Asus ZenFone 9 features a 5.9-inch screen, measuring 146.5 x 68.1 x 9.1 mm and weighing 169 grams. It retains the "extremely advanced" 3.5mm headphone jack that seems to have become standard on Asus flagships. Available in Midnight Black, Moonlight White, Sunset Red and Starry Blue, it also has an IP68-certified, dust- and water-resistant build.

Another highlight of the Red Magic 7 is that it features a 6.8-inch AMOLED screen with a resolution of 2400x1080p, supports up to 165Hz refresh rate, 720Hz touch sampling rate, tripod pixel arrangement, and DCI-P3 100% wide color gamut, which is crucial for gamers.

In terms of core configuration, the Red Magic 7 Series is powered by the Snapdragon 8 mobile platform with LPDDR5 RAM and UFS 3.1 flash storage, support for ARC Performance system, and also support for virtual memory with an additional 6GB, up to 24GB.

The new Red Magic 7S, however, is expected to be even more powerful.

Next, let's take a look at the sub-flagship phones rankings. 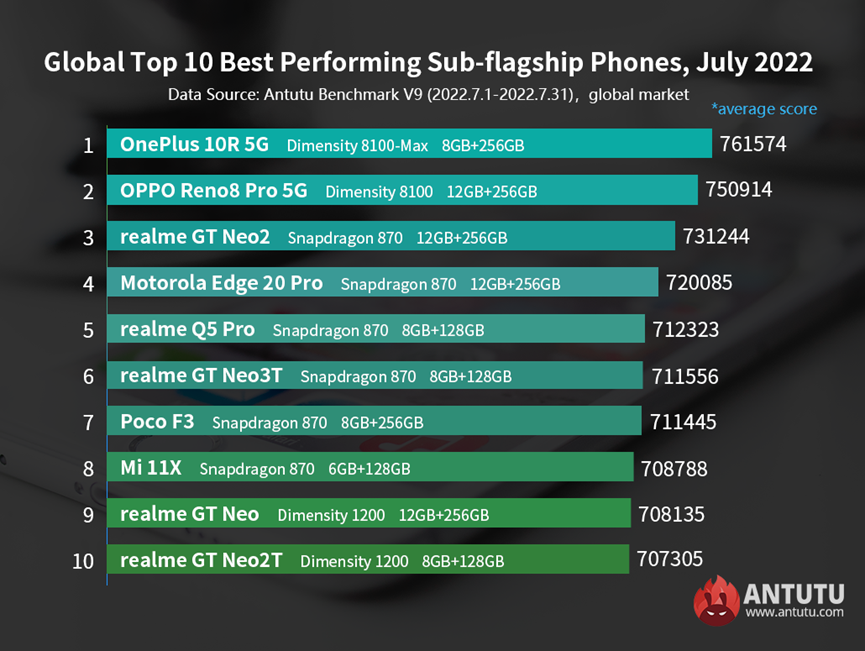 The list shows how competitive the Dimensity 8100 is in this market with its lower power consumption and higher performance compared to the Snapdragon 870. The Snapdragon 7 Gen 1 is not even able to appear on the list.

While Qualcomm is once again leading in terms of share of the Android flagship phone market, MediaTek's position on the sub-flagship remains incredibly strong.

Surprisingly though, the Google Pixel 6 series disappears from the list. Google's Tensor has similar performance to the Snapdragon 870, and the Google Pixel 6 scored around 700,000 in the previous list. RealMe seems to have released a lot of phones in the same price range, resulting in a lot of RealMe phones on the list.

As people are increasingly affected by the COVID-19 pandemic and inflation, the mobile phone market is no longer as prosperous as it once was, with sub-flagship and mid-range phones becoming the choice of an increasing number of users. As a result there are some rumors that the Snapdragon 8+ Gen 1 will appear in these markets in the first half of next year.

The rankings for mid-range phones have not changed much, with manufacturers sticking with last year's Snapdragon 778G processor, seemingly due to some performance issues with Qualcomm's new generation of Snapdragon 7 processors.

The mid-range phone market ranking has not changed much overall compared to last month, except for the top spot becoming the Nothing Phone 1.

Although the appearance of Nothing Phone 1 is attractive, frequent quality control problems seem to be a challenge for this new company. It's a shame that the founder of OnePlus didn't achieve what OnePlus did.

Samsung's Exynos processors are still not on the list. There are some rumors that Samsung is reorganizing their team in order to bring Exynos processors back up to date. But with a new Exynos processor not expected until 2025, Qualcomm and Mediatek will continue to dominate the Android processor market for the next two years.

That's all for the global Android phone performance list in July 2022. There are still very few Snapdragon 8+ Gen 1 phones on the list, but August's list will probably be completely different from the current one.