It's already July, and the mobile phone market is set to see a wave of new Android flagships in the second half of 2022. Now is the right time to review the development of Android phones in the first half of the year.

In contrast to the monthly lists, the significance of the quarterly updated preference lists is to understand the current development of Android phones and to use these data as a reference to derive recent trends in smartphones. While the direction of development is partly determined by the mobile phone suppliers, it is users who ultimately make the choice.

We have worked out the user preference ranking list in Q2 of 2022 based on the backstage data of AnTuTu. What kind of mobile phones do AnTuTu users prefer? Let's have a look at the ranking list.

It should be noted that this preferences list is prepared based on the phone configurations of AnTuTu users and thus it does not represent the preferences of the overall Android market. 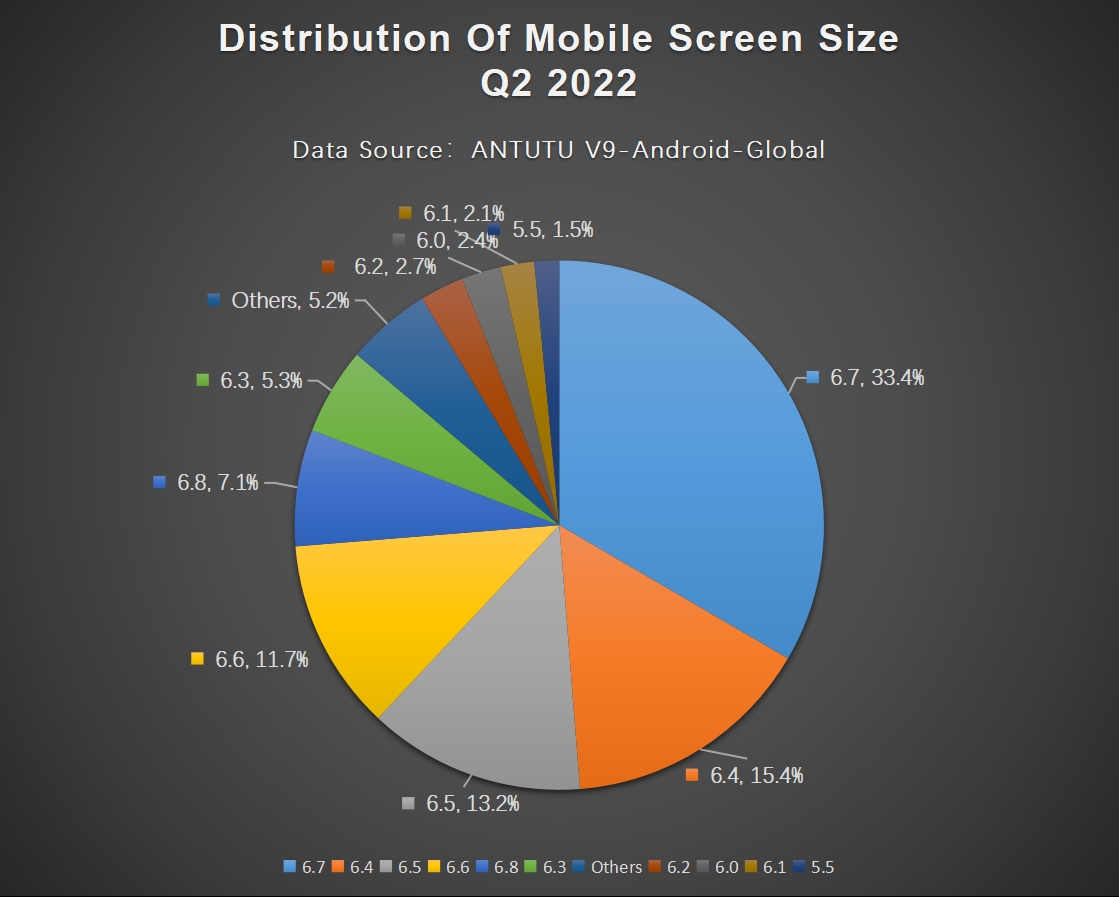 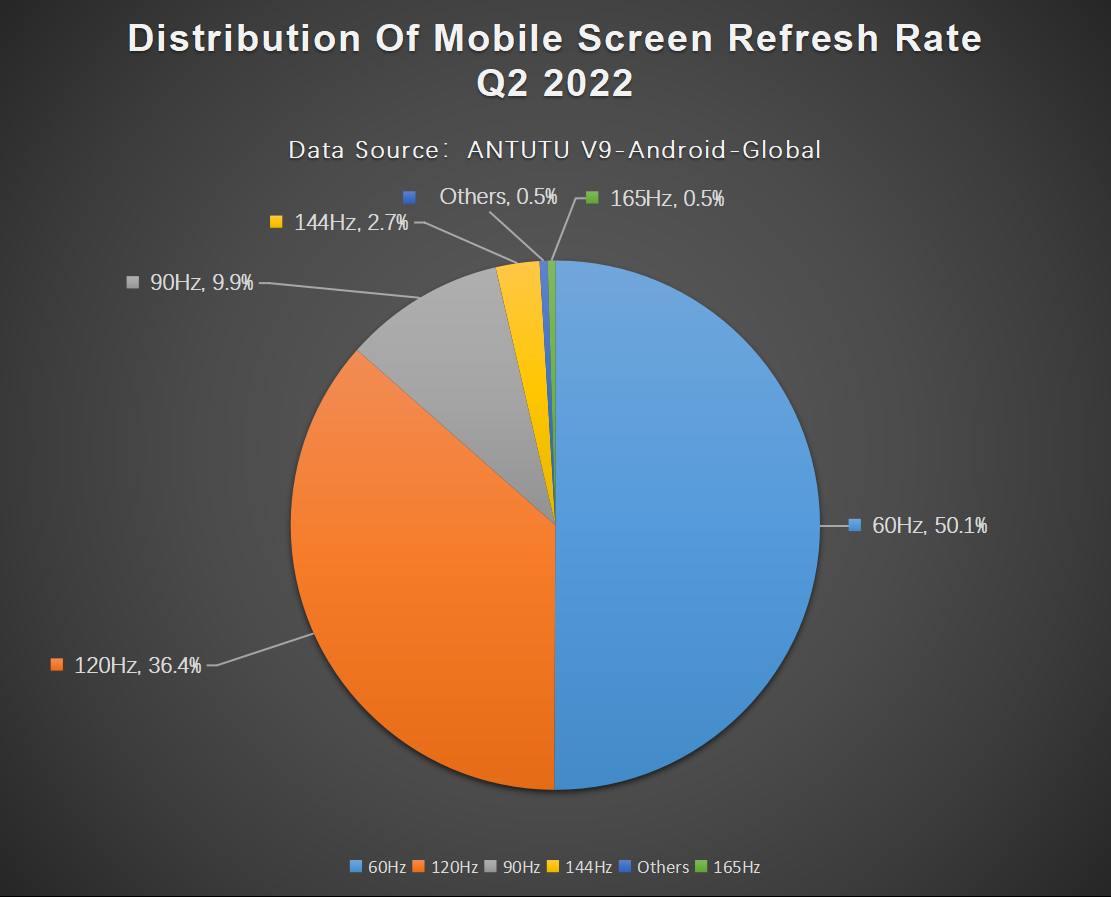 A little higher resolution than 1080p is 1440p, and it is logical that with the direction of higher and higher resolutions, 1440p should account for more and more, but in the second quarter, the share of 1440p resolution phones declined compared to the first quarter, from 2.3% to 1.6%. It seems that overseas Android phone users not only prefer smaller screens but are also not too concerned about the increased resolution of the screens.

The advantage of a lower resolution, however, is that the power consumption of mobile phones will be reduced. 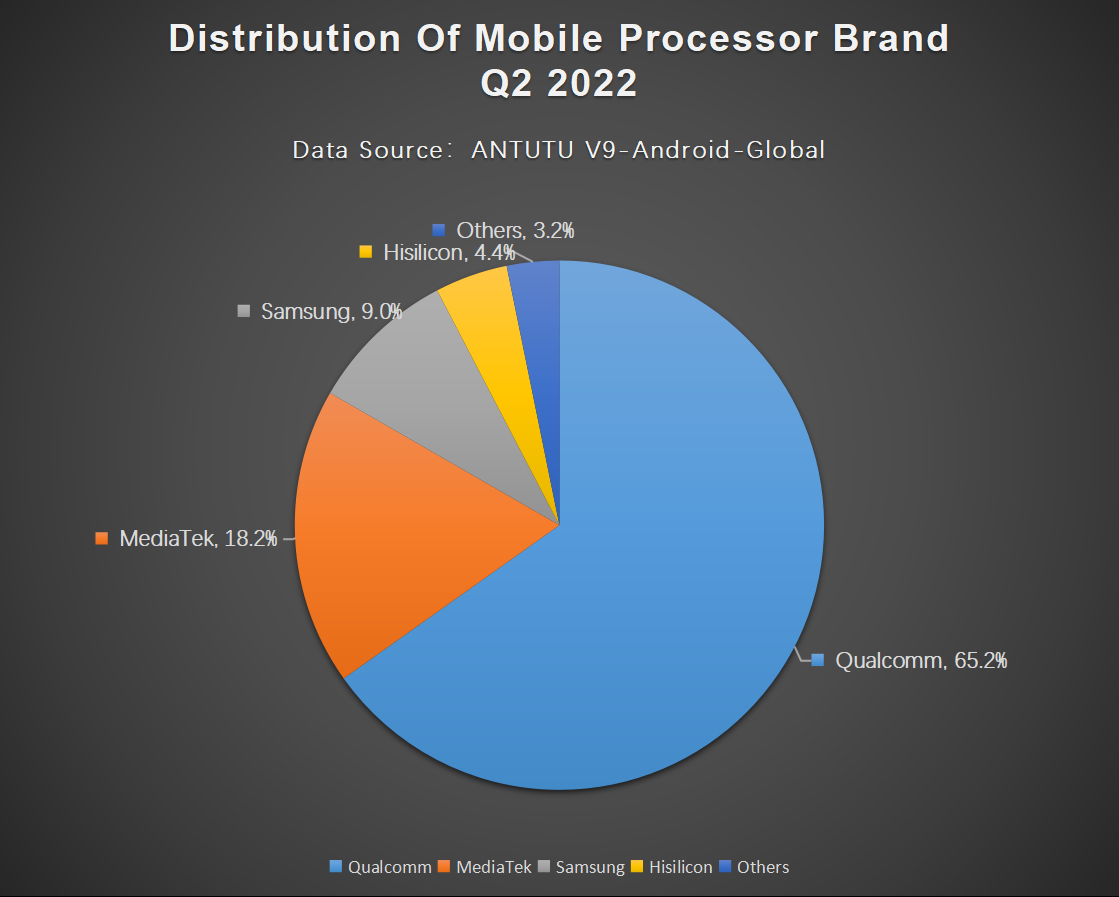 Compared to the first quarter of this year, Qualcomm's market share increased by 1.2%, MediaTek's by 1.1%, and both Samsung Exynos and Hisilicon' shares decreased. It is now mainly MediaTek and Qualcomm that are competing for processor market share. MediaTek has been on the rise even though each increase has been small.

Other processor brands: Samsung Exynos, HiSilicon, and others. The combined share of these three categories is not as high as that of MediaTek.

The market share of Octa-core phones increased by 0.1% compared to the first quarter, reaching 98.6%, and reaching 100% is just a matter of time.

The pie chart includes Qualcomm, Mediatek, HiSilicon, and other brands. As for why Quad-core and others still occupy a small share of the pie chart, it's just that some of the old users are still using them, perhaps as a backup or a nostalgic product, pretty much the same as last quarter.

In terms of RAM size, 6G RAM is still in first place at 27.2%, but its share has been falling for three consecutive quarters. In contrast, the share of 12G RAM is on a clear upward trend, ranking fourth with 10.6% in this quarter.

Somewhat surprisingly, the share of 4GB RAM also increased by 1.1% in this quarter to 16.5%. It could be that some countries released new entry-level models of certain brands.

Many brands in the Chinese mobile phone market have now removed the starting 6GB version, in contrast to the less competitive overseas Android phone market.

In terms of ROM size, the share of 64GB and 128GB decreased by 0.4% and 0.9% respectively compared to the first quarter, while 256GB increased by 1%. This is broadly similar to the situation in the Chinese mobile phone market, only with relatively smaller changes.

The easiest and fastest-growing part of the mobile phone industry is the size of RAM and ROM. Mobile apps now always start with hundreds of megabytes, and games require more than 10GB of space, if the ROM size is not enough, the phone will not run smoothly.

For Android phone users nowadays, the version of Android is not so important, what attracts users more is the distinctive UI of each major mobile phone manufacturer.

The pie chart shows that Android 12 has quickly become mainstream after its release, with a share of 52.1%, an increase of 25.8% compared to the first quarter. The use of the latest Android version is a direction of competition in the current mobile phone market, which shows responsibility to users as well as the strength of manufacturers in terms of software systems.

In contrast, the share of Android 11 has dropped by 24%, largely replaced by the newer version.

We can see that the 60Hz refresh rate still accounts for the largest share of the pie chart, this is because a large number of flagship phones have been upgraded to the latest LTPO 2.0, with more accurate adaptive refresh rate adjustment and a more power-efficient screen. 120Hz is actually the real mainstream of the market.

That's all for AnTuTu's global users' preferences for Android Phones in Q2 2022. It should be noted again that the ranking list only represents the preferences of AnTuTu users rather than the configuration distribution of the overall Android mobile phone market.