The number of phones released in the market in April was significantly less than that in the first quarter. In addition to a few major manufacturers releasing flagship phones this month, most of the other manufacturers mainly update mid-range models, so the performance ranking list of flagship phones in April did not change much.

There are many highlights in the mid-range market this year. Most of the mid-range models are using the last generation of flagship processors - Snapdragon 870, Snapdragon 888, etc., and many are using MediaTek’s two new sub- flagship processors Dimensity 8000 and Dimensity 8100. Considering the sharp increase in the number of cost-effective new models, this time we have added a performance ranking of sub-flagship models to the list. The score difference between flagship and mid-range phones is about 300,000 points, so we believe that the addition of the sub-flagship will give the list a good transition and better meet everyone's expectations.

Let's take a look at the specific data of the April ranking list below. It should be noted that figures in this ranking list were calculated from April 1 to April 30, 2022. The results in the ranking list are average scores instead of highest scores, and thus more representative. 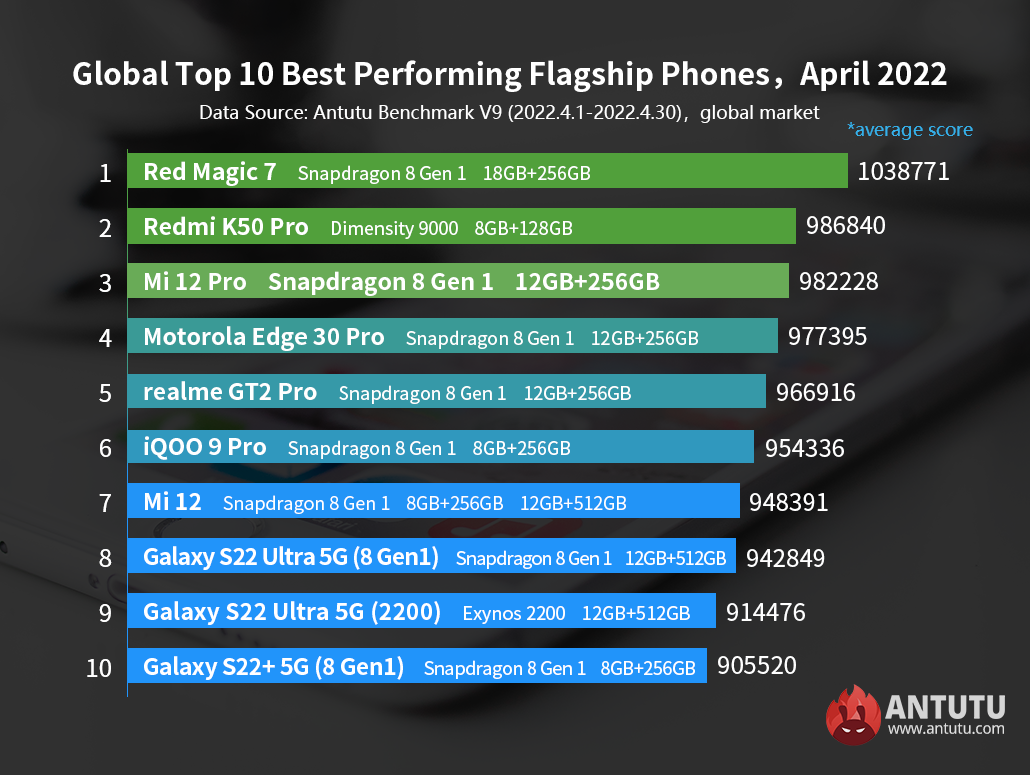 Every new generation of Nubia's Red Magic game phone since its release has had impressive running scores that have completely surpassed the older gaming phone, the ROG Phone. The new Red Magic 7, equipped with a new generation of Snapdragon 8 processor, ranked at the top of the overseas Android phone performance list in April with an average running score of more than one million points. It is also the only flagship phone on the list with a score of more than one million, which once again proves the strength of the game phone in terms of performance.

In terms of imaging, the rear is a 64-megapixel main camera + 2-megapixel macro + 8-megapixel wide-angle, and the front is an 8-megapixel selfie lens. The phone is equipped with a 165W gallium nitride charger, which supports up to 120W fast charging, and the battery capacity is 4500mAh. The starting price for the 8GB + 128GB version of this phone is CNY3,999.

It can be seen that Xiaomi is paying more and more attention to the Redmi phone. The Redmi K50 Pro is Redmi's latest K-series flagship phone released this year. It is the world's first phone to be sold with MediaTek's Dimensity 9000 processor. The phone's average score of about 980,000 points proves MediaTek's strength. Impressively, the eight phones that came after it are equipped with Qualcomm's Snapdragon 8 Gen 1 chip and Samsung's Exynos 2200 chip, which use this year's latest 4nm process, yet they were still surpassed by Dimensity 9000.

So after a while, if MediaTek's production capacity keeps up, the top 10 flagship models will change dramatically. MediaTek does have the strength to compete with Qualcomm this year.

As we mentioned earlier, Xiaomi has increased the focus on the Redmi series, so this time we dramatically see the Mi 12 Pro coming in behind the Redmi phone. As the world's second flagship phone equipped with Snapdragon 8 Gen 1, Mi 12 Pro has undoubted performance and configuration. However, the Mi series is now more focused on the high-end market, and the Redmi is different. Redmi K50 Pro features a 2K resolution straight screen, Dimensity 9000 processor, and 120W fast charging, but is priced at only CNY 3,000, which would have been hard to imagine a year ago.

Compared with the Redmi series, the Mi series gets more profits from the market, which also supports Redmi to sell such a good configuration at such a low price to a certain extent.

Last month the top 10 flagship models were all equipped with Snapdragon 8 Gen 1 and Samsung Exynos 2200 processors, in April the Dimensity 9000 finally appeared on the list and ranked second.

Although the release of the Dimensity 9000 processor is relatively late, the market recognition of MediaTek is much higher than Snapdragon and Samsung this year. The number of flagship phones powered by the Dimensity 9000 could end up having a similar market share to Qualcomm. Samsung Exynos 2200 may gradually withdraw from the market.

Next, let's look at the newly added sub-flagship phones list. Compared to high-end flagships, the competition in the sub-flagship market is more intense. 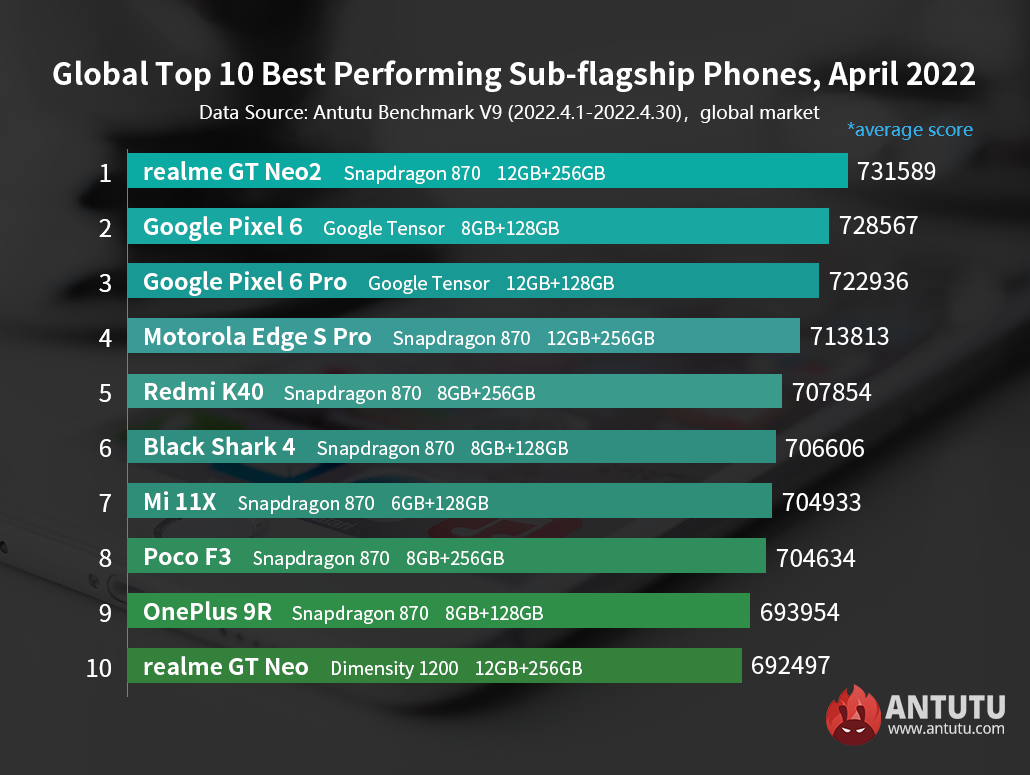 The model at the top of the list is the GT Neo 2 from Realme, which was released in 2021 and is equipped with the Snapdragon 870 processor, which is the same processor that has been used in many new sub-flagships this year. Manufacturers are very familiar with this chip and it is very suitable to be used as a sub-flagship.

However, GT Neo 3 was also released last month, and the processor upgraded to Dimensity 8100, which is equivalent to Qualcomm’s Snapdragon 888. Therefore, GT Neo 2 will not be at the top of the sub-flagship list for a long time, and it is likely to be replaced by GT Neo 3 in the future.

In second and third place are the Pixel 6 series from Google, both of which were also released last year.

Instead of using Qualcomm processors, both the Pixel 6 and Pixel 6 Pro opted for a chip designed in-house by Google. Google calls its chip Tensor and also customizes the chip's features. For example, the Tensor processor is customized for Pixel's computational photography function, providing Pixel users with features they are familiar with, while also being further optimized.

This strategy is somewhat similar to Apple's self-developed M1 series chips, in addition to getting rid of the dependence on chip manufacturers, but more importantly, the chip can better serve their own mobile phone’s software. We believe it will be a key direction in the future development of smartphones, but currently only Apple and Google have the ability to do so.

The average score of Google Tensor is close to that of Snapdragon 870, showing strong performance. However, the starting price of nearly CNY 5,000 is a bit too expensive. Hopefully, Google's next-generation chip can have the same high-cost performance as Mediatek Dimensity 9000.

Seven of the top 10 models in the first-ever sub-flagship ranking are equipped with Snapdragon 870 processor. Although Qualcomm’s processors have heat problems, they will still be very popular in the market as long as there is an appropriate price, and the performance of the Snapdragon 8 series processor is certainly much better than that of the 7 series.

MediaTek's new Dimensity chips have not yet appeared on the list, because although there are several cost-effective new models equipped with these chips in the Chinese market, there are no such models released overseas at present. We believe that after a while MediaTek will also make get a good ranking on the global sub-flagship list.

Finally, let's take a look at the ranking of mid-range phones. 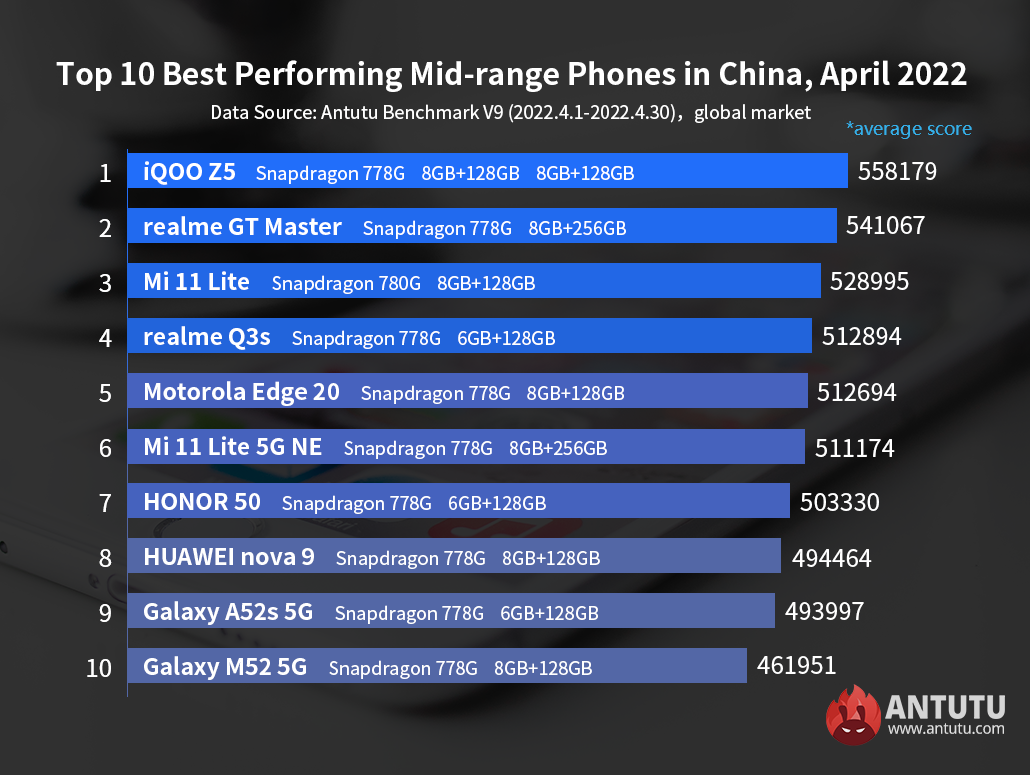 The Snapdragon 778G is launched globally by the Honor 50 series, which is the first blockbuster product brought by Honor after its independence, and also marks Honor's official joining Qualcomm Snapdragon camp. Specific performance parameters, the snapdragon 778G is manufactured using 6nm process technology, CPU is composed of four 2.4Ghz A78 cores + four 1.8Hz A55 cores, and GPU is integrated with Adreno 642L. According to Qualcomm, the Snapdragon 778G has a 40% increase in both CPU and GPU performance compared to the Snapdragon 768G.

That's all for the global Android phone performance list in April 2022. The newly added sub-flagship list compares models with average running scores between 690,000 and 730,000, giving people a better reference when making choice.