2022 has officially arrived, and people are excited to start the new year. While everyone is looking forward to the Spring Festival, Antutu brings the iOS device performance list in the last month of 2021. Let's see which devices are still ranked in the top 10.

It should be noted that figures in this ranking list were calculated from December 1 to December 31, 2021. The results in the ranking list are average scores instead of the highest scores, and thus more representative. The scores in the list are mainly based on the Antutu V9 version and cannot be compared with the results of the previous versions. 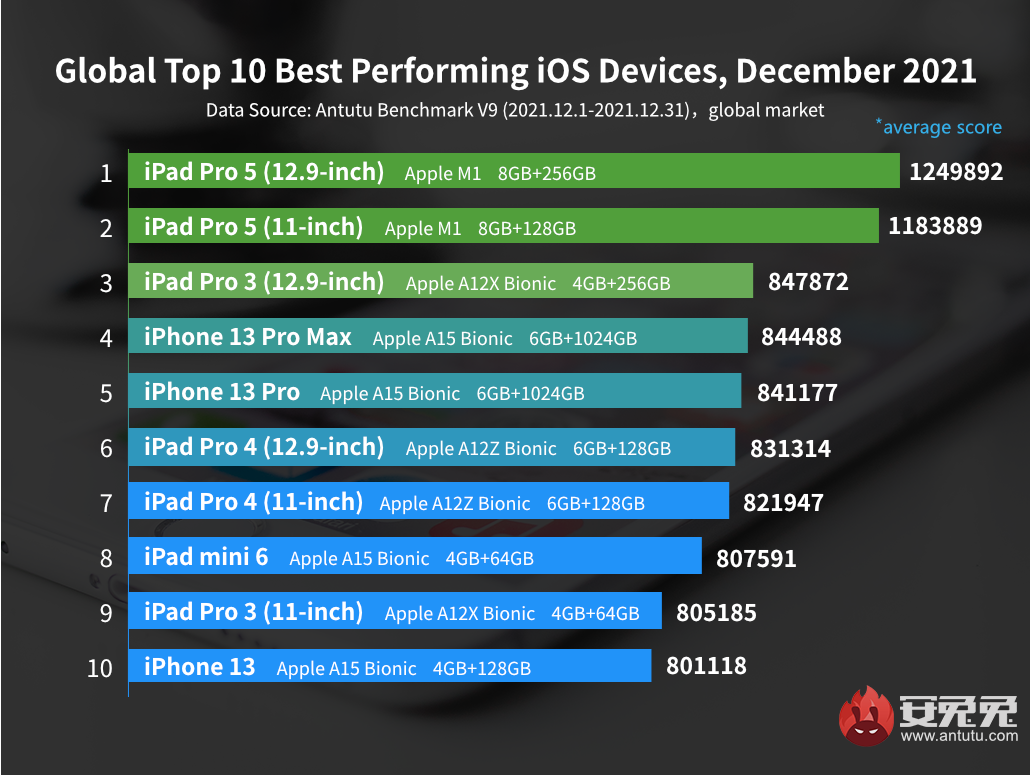 Since Apple stopped updating its entire 2021 lineups after the release of the new Macbook, it's no surprise that the two different screen sizes of iPad Pro with M1 chip are still ranked first and second on the iOS performance list. The score of 1,249,892 and 1,183,889 is already the best proof performance. In fact, the application software in iPad products generally does not need such strong performance, so what users are curious about now is whether Apple will unify iPadOS and macOS to get the most out of the M1 chip.

The iPad Pro 3 (12.9-inch) is powered by Apple's A12X processor, which was released in 2018. It has an 8-core CPU (four big cores, four small cores) and 7-core GPU, as well as a neural network engine with up to five trillion operations per second, uses TSMC's 7nm process and features 10 Billion transistors.

In comparison, the A15 processor is based on TSMC's 5nm process, the CPU adopts a 6-core design, including two high-performance cores and four small energy-efficient cores, operating at 3.23GHz. The GPU adopts a 5-core design, which is one more core than the previous generation A14.

The iOS performance list for the last month of 2021 is almost the same as that of November, except for a few changes in average scores. 2021 has passed and the new year has come. What products will Apple bring us this year? Let's look forward to it.

That's all for the December iOS Performance List, and we'll see you next month.