The third quarter of 2021 has passed in an instant, and there are less than 100 days left this year. This year's overall mobile phone market development and change are almost over by now, even if there are new phones to be released in Q4, there will only be minor changes. The major changes will have to wait until the beginning of next year. Therefore, we believe this preference list can be seen as a summary of the trend of mobile phone products in 2021.

Today, we have worked out the user preference ranking list in the third quarter of 2021 based on the backstage data of Antutu. What kind of mobile phones do Antutu users prefer? Let's have a look at the ranking list.

It should be noted that this preferences list is prepared based on the phone configuration of the users of Antutu and thus it does not represent the preferences of the overall Android market.

In the third quarter of 2021, the 6.7-inch screen became the mainstream, accounting for 29%, nearly a third of the market. For the current smartphone market, everything is getting larger, larger screen, larger memory, and storage, larger camera area. These are the progress made by science and technology when it is impossible to change the size of the product, and with the continuous progress of science and technology, these components will surely be smaller again.

The proportion of products with screen sizes less than 6.3 inches has decreased, which is due to market factors, as there are almost no brands in the new phone market offering these screen sizes anymore.

At present, most of the flagship phones on the market are pursuing higher resolution screens. Sony is the only company that could achieve 4K resolution, all the others are still at 3K. However, such fine resolution brings power consumption and battery consumption, and there is no good solution for battery technology except fast charging, so even if 4K is popularized in all mobile phones, There will still be a lot of people who will adjust the screen to 1080P because of power consumption.

A higher refresh rate might actually be more enjoyable than turning on high resolution on a 7-inch screen with very close viewing. In other words, 1080P will be with us for a long time.

Mediatek also ranked second as before, but with a significant increase, increasing its share by 4.2% compared to Q2. It is the only processor brand to increase its share in Q3 2021. And obviously, with Mediatek's market share increasing, the share of other brands will naturally be reduced.

The proportion of 8-core mobile phones continued to rise by 0.2% to 98.3% compared with the second quarter of this year, although the figure did not increase much, it is difficult to continue to grow at the current proportion, and it will take time to achieve 100% popularity in the global market.

The number of CPU cores is already a set trend and will definitely reach 100%. This is the inevitable trend of the development of science and technology. What we need to do is to wait for this number to come. 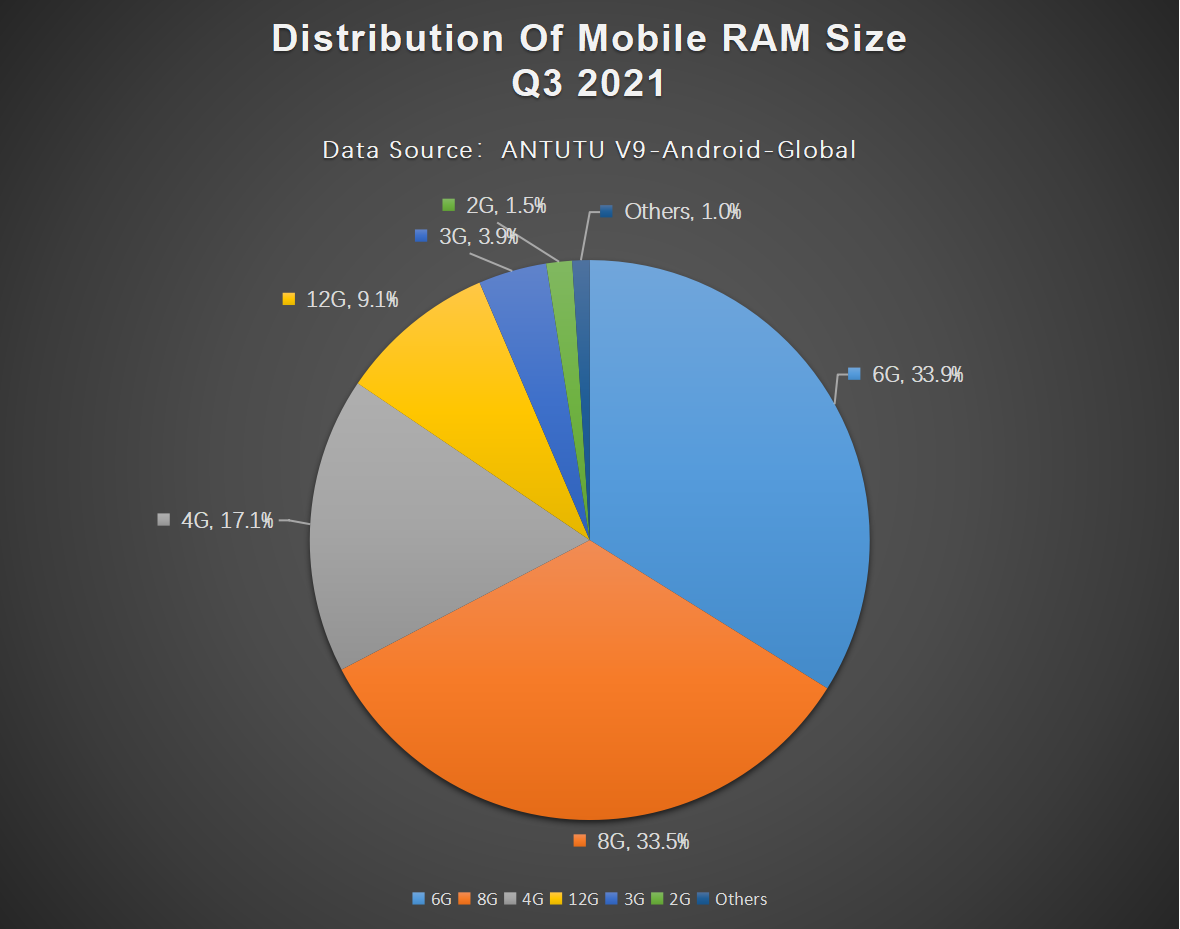 In terms of RAM size, the proportion of 6GB RAM is still the largest at 33.9%, but it should be noted that this figure is down by 1.8% compared with that of Q2, which means that while the 6GB RAM is still the mainstream, it will soon be replaced, because the proportion of 8GB RAM increased by 2.9% to 33.5%, only 0.4% less than the highest 6GB RAM, the era of the mobile phone starting with 8G RAM is coming soon.

In addition, the proportion of 12G RAM also increased by 0.6% compared with Q2, with a figure of 9.1%. The proportion of larger RAM size is increasing, which is inevitable in the development of mobile phones. 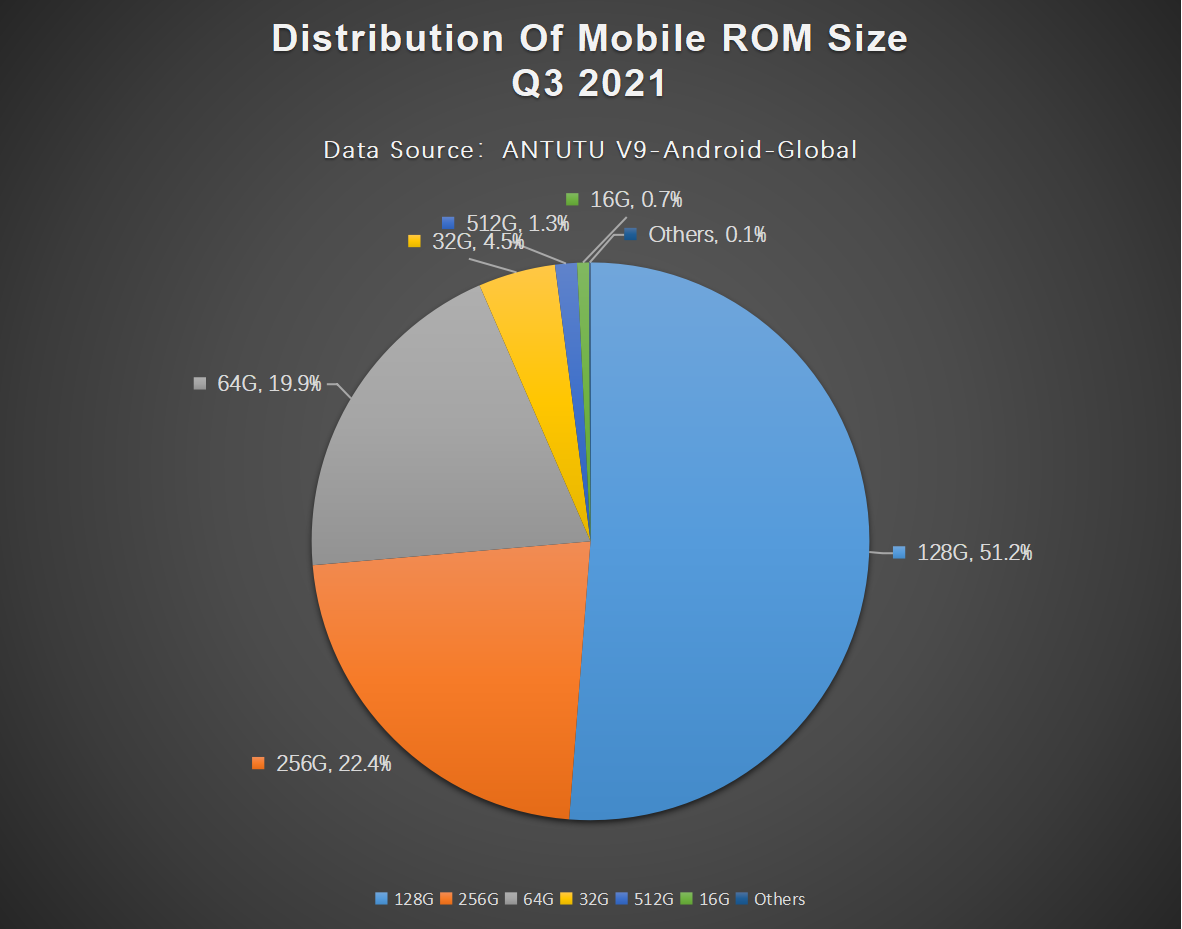 In terms of mobile phone ROM size, the proportion of 128GB ROM and 256GB ROM continued to increase, with the former increasing by 1% to 51.2%, more than half of the total, and the latter increasing by 2.3% to 22.4%. The combined proportion of the two is 73.6%, which is complete market dominance.

We can imagine such a situation in ROM after seeing the changes in the RAM market, as RAM and ROM are complementary, the former increase the latter will have to follow up, otherwise, the overall configuration of mobile phones will deviate. Now, most mobile phones are starting with 128G ROM. After all, with a single application occupying a lot more memory, 64G phones are really outdated.

As we can see from the distribution chart, Android 11 significantly increased by 19.7% compared with Q2, accounting for 71.3%. Not only users but also mobile phone manufacturers prefer a better Android 11.

This shows that both phone manufacturers and users are rapidly upgrading to Android 11 with better security and use functions. Now that Android 12 has also been released, and several Chinese phone manufacturers have already launched several early access of the mobile phone. The speed of updating is much faster than that a few years ago. 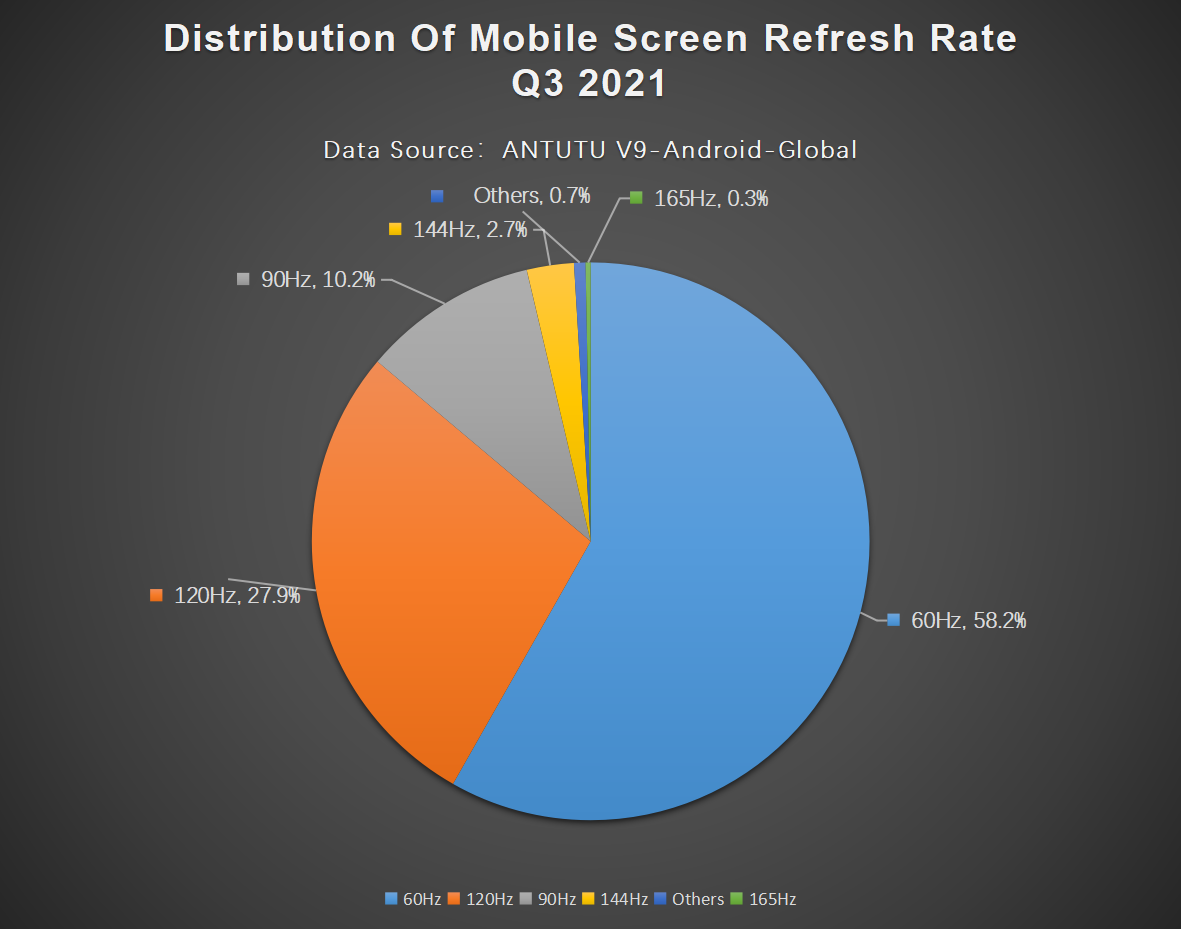 We brought the screen refresh rate figures to the preference list of Q2 for the first time, and this time it finally had comparative data.

The above is the overall picture of Antutu's global user preference ranking list in Q3 of 2021. The mobile phones in the list are still in the development of bigger and stronger, it is actually very easy to understand tech stuff, mobile phone components in addition to the aperture of the lens, the other figures are the bigger the better, this is also confirmed by the items with the largest proportion of each category in the list.