The upsurge of new phone release in the first half of the year should be completely over now. In the first five months, all major mobile phone brands have brought the latest flagship products of this year. There is no doubt that these products will support the sales of the brand until September. Therefore, at this point in time, the comparison of Android mobile phone performance list has a more obvious change.

Let's take a look at the specific ranking list data.

It should be noted that the data statistics is from May 1 to May 31, 2021. The results in the ranking list are average scores instead of the highest scores, and there are more than 1,000 pieces of information on single phone model. The data was calculated based on Antutu V9. If any single phone model has several memory capacity versions, then its version of the highest memory capacity shall prevail. 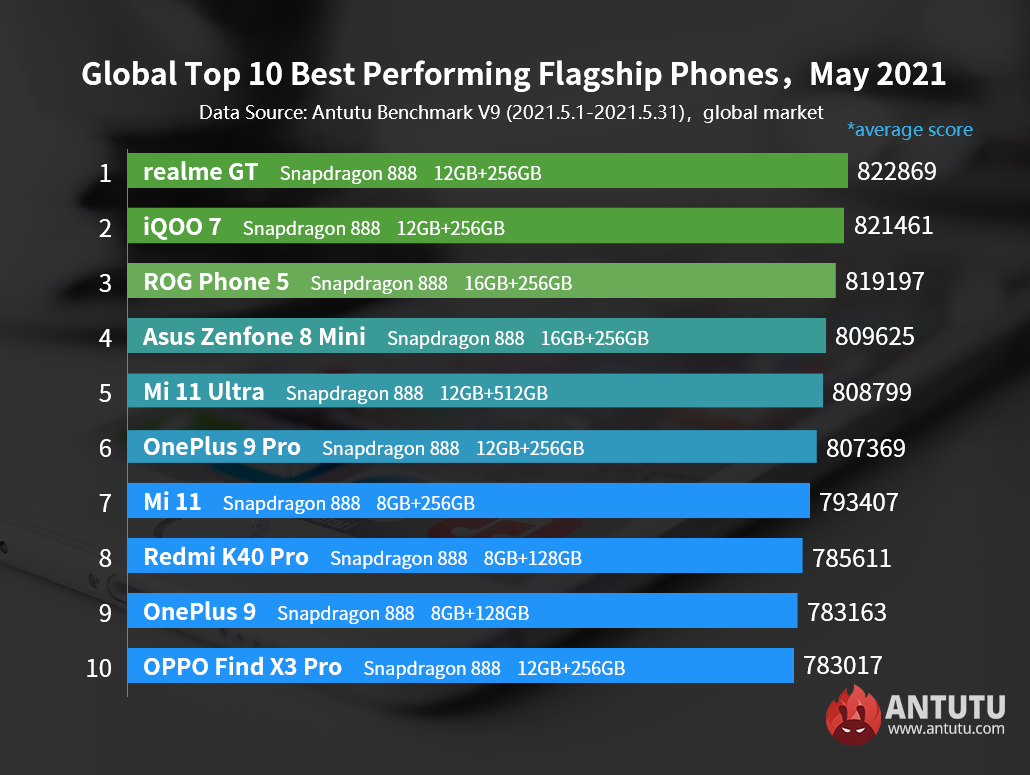 It is the first time that the brand realme has won the first place in the Android mobile performance ranking list. Congratulations to realme!

In the whole month of May, the average score of realme GT was 822,869, which was a little better than the former dual champion iQOO 7 with 1000 + points.

In terms of configuration parameters, realme GT is also equipped with Snapdragon 888 processor, triangle combination of LPDDR5+UFS 3.1, plus 120Hz Super AMOLED high refresh and 65W super flash charge. It is overall a flagship user experience, and the cost performance of this mobile phone is also very good.

iQOO 7, which used to be the dual champion, was beaten by realme GT this time. However, the score gap between the two mobile phones is not big, and both of the scores are the top version of 12+256G, so there is no difference in the comprehensive experience but the system. The charging speed of iQOO 7 is faster than realme GT, Because iQOO 7 is equipped with 1,200K fast charging, and the battery capacity is only 4000mAh.

As the leader of game mobile phones, ROG Phone5 has only once been at the top of the Android mobile performance rankings list since its launch. It has been pushed to the third place in this ranking, almost on the point of not even being in the top3, moreover, the running score of ROG Phone5 comes from the super top version of 16+256G. It shows that even if the market positioning is not a game phone, both realme and iQOO have achieved a very powerful scoring experience.

It can be clearly seen from this ranking list that the top 10 are all equipped with Snapdragon 888 processor. Qualcomm's share of Android flagship phones market is still unsurpassed, and a new era has officially arrived.

With Qualcomm bringing the new Snapdragon 780G mid-range processor to the market, the rankings and models are finally changing. 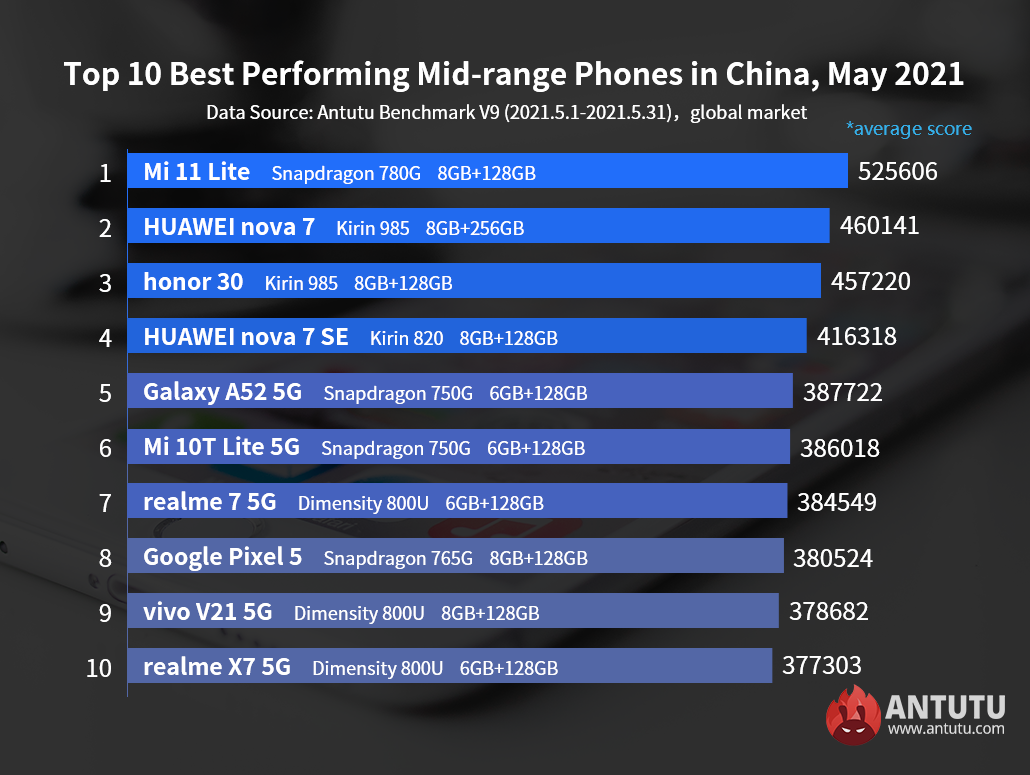 As expected, Mi 11 Lite, the first mobile phone equipped with Snapdragon 780G, came to the top of the list of mid-range phones as soon as it was released. The score of 525,606 also beats Kirin 985, which has been the winner for more than half a year.

The Snapdragon 780G is the successor of the Snapdragon 768G with the following configurations:  5nm flagship process and nearly half parameters of performance improvement, it is built by Samsung 5nm LPE process, and its architecture is upgraded to 1+3+4. The CPU is composed of 1 Cortex-A78 core (2.4GHz), three A78 cores (2.2GHz) and four A55 cores (1.9Hz).

According to Qualcomm, the CPU performance of Snapdragon 780G has been improved by 45%, mainly benefit by the upgrade of large core and new architecture.

Mi 11 Lite is currently the only mobile phone equipped with this processor, but it is believed that it will be used in more new phones in the future.

The second and third places are two different brands that we are familiar with, but almost identical. HUAWEI Nova 7 and Honor 30 are both equipped with Kirin 985 processor, the configuration is basically the same, so the scores are almost the same.

There is still no processor could beat Qualcomm in Android mobile phone market.

The above is the performance ranking list of overseas Android mobile phones for May 2021. See you next month.