Apple’s spring new product launch event was finally held on April 21st after being postponed for a month. Apple’s first self-developed chip, M1, has also officially joined the iPad product line. This chip for several generations of intel products is as early as the new Mac Both mini and MacBook show great power. The addition of the iPad product line now not only accelerates the unification of Apple's hardware, but also lays the foundation for whether the iPad can use macOS in the future.

Unfortunately, the iPad Pro equipped with the M1 chip did not appear on our list this time. But in the list in May, it will definitely appear in the form of a slaughter. Before that, let's take a look at the performance list of iOS devices in April. The data collection period is from April 1st to March 30th, 2021, and the data statistics are based on the Antutu V8 version. In order to be more representative, the results appearing in the list are average running points, not the highest running points. 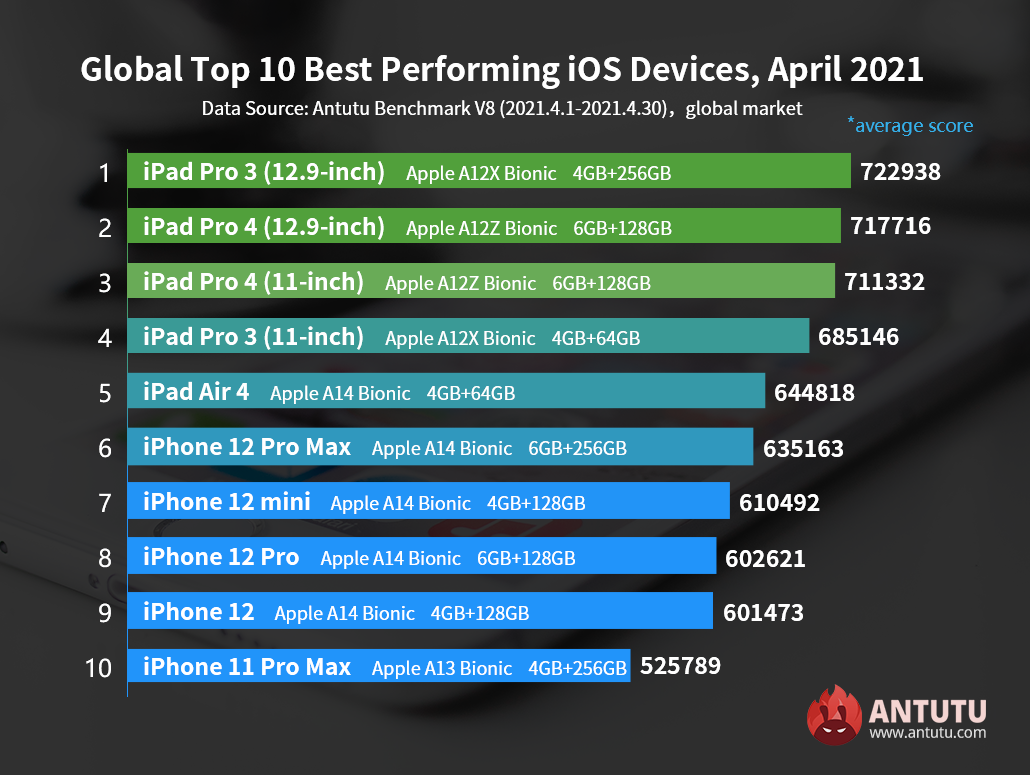 Since the new M1 iPad Pro hasn't made the list yet, the iPad Pro 3 (12.9-inch) is still the top performance device on iOS, with an average rating of 722,938 in April, a slight drop from the previous month, but averaged over thousands of units each month. The iPad Pro 3 has been No. 1 for five months, and next month, the M1 iPad Pro will finish it off with a huge score. The M1 iPad Pro is also expected to dominate the new iOS performance charts for a year because the M1 chip is so strong.

The iPad Pro 4 (12.9-inch) ranked second on the iOS performance list in April, and its average running score in March was 717716, which was a decrease of hundreds of points compared to March, which was negligible. There was no problem in performance, so it was enough.

The iPad Pro 4(11-inch) is still in the third place this time, with an average running point of 711332, which is a gap of several hundred points compared with last month. The actual experience of the top three products is not very different from each other. In terms of performance and usage, the biggest difference between them may be the screen size.

In addition to updating the iPad Pro product line, Apple’s spring conference also brings everyone the most critical signal is that the core of the iPad hardware is unified with macOS devices. Will the iPad Pro system also be updated from iPadOS to macOS? It is actually possible. Yes, but whether it can be done or not will be known until Apple's WWDC in June this year. If it is true, the mobile office efficiency of the iPad Pro will be greatly improved, and running some computer software is not a problem.

The current iOS device performance ranking first score is above 70W points, which is the score from the A12X chip. Compared with the newly updated M1 version of the iPad Pro, both the chip and the storage are much lower. Faced with the most powerful iPad Pro in Apple's history, we can let go of our imagination. It should be easy for a score of 100W or more to completely crush any product that Apple has ever had.

Apple has updated its products, but they haven't made it to the list yet, so let's hope for the next month, and we'll see how much change you'll see.