As March has arrived and Q1 of 2021 isgoing to end, many new phone models are announced to be launched this monthunder Chinese mobile phone brands. On the contrary, there is still nothing newabout iOS products since Apple never entertains the ideaof playing to the crowd.

Today, we have released the iOS DevicePerformance Ranking List for February 2021 according to the data collected fromthe backstage of Antutu, which is almost still in a stable state because of norelease of new iOS products, except for little change.

It should be noted that the data in thisranking list was calculated based on the iOS Antutu V8 and collected for aperiod from February 1 to February 28, 2021, with the results in the rankinglist being average scores instead of the highest ones, which are morerepresentative. 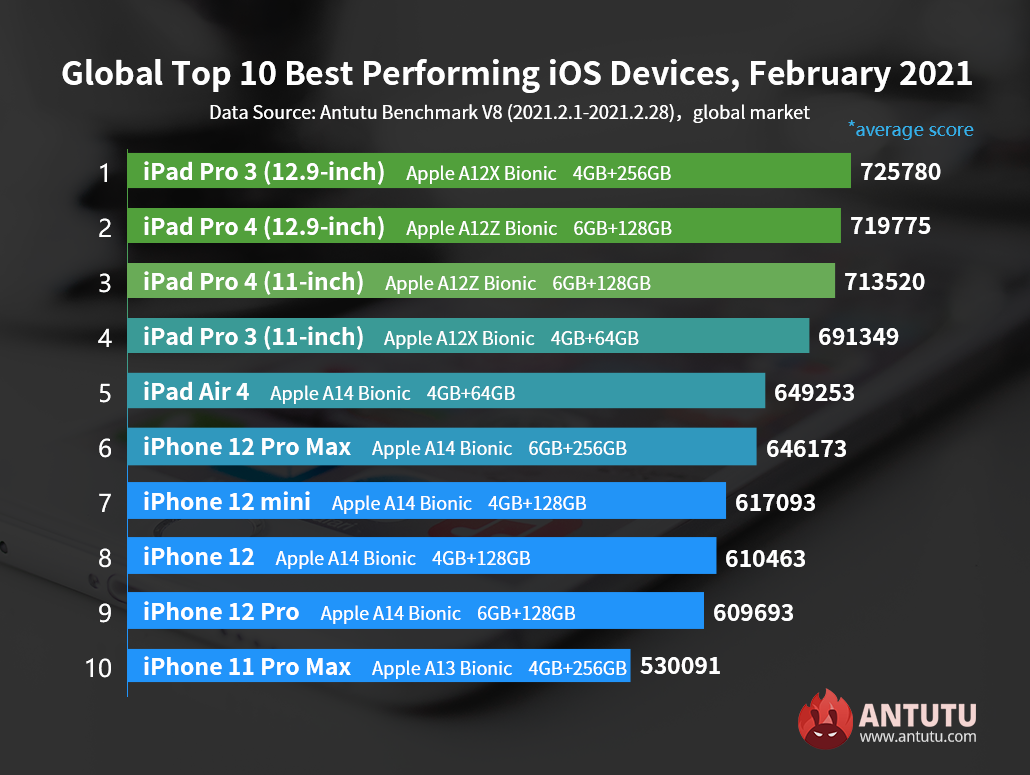 Since iPad Pro 3 (12.9-inch) ascended fromNo. 3 to No. 1 last month, it has defended such a place this month and alsoremained first on the iOS performance ranking list in February. Nevertheless,its average score is only 725,780, over 2,000 points lower than 728,253 inJanuary, but this gap is just a normal fluctuation caused by the vast size ofits database in addition to different system versions of devices possessed byeach user and might bounce back next month. A lower score than that in Januarydoesn't mean poor performance.

As the largest iPad product equipped withApple’s A12X processor, of course, there is no need to say much about itsperformance, and there might be no App in the market that could overwhelm iPad.

Just as the No.1 product, iPad Pro 4(12.9-inch) also secured its second place in February, with an average score of719,775, which was several hundred points higher than 719,476 in January 2021. Itis powered by Apple’s A12Z processor, which was launched later than A12X poweringthe iPad Pro 3 (12.9-inch) ranking No. 1. But it is just a toothpaste-squeezingproduct of Apple with an added core without a big change in overallperformance, which therefore results in such ranking.

iPad Pro 4(11-inch) has also maintained itsthird place, with an average score of 713,520, which is several hundred pointshigher than 713,177 of last month. It is also equipped with the A12Z processorof Apple, making no big difference in substantial performance among the topthree product models. Ordinary consumers will be satisfied when using iOSproducts they have purchased without feeling obvious inadequacy in theirperformance.

All the above three products are powered byApple’s A12 series processors, including A12X and A12Z, respectively. However,the final results are not entirely processor-based, as the experience alsodepends on the real usage and the results are only for reference.

In terms of score, it's obvious that theA12 series of the top four models are basically at the same level, but from thefifth model with Apple’s A14 processor, a distinct gap appears, with the scoreof iPad Air 4 over 40,000 points lower than that of iPad Pro 3 (11-inch), whichshould be noted.

In terms of product, Apple’s A14 is mostlyused in the iPhone series and also in iPad Air4, which is a kind of lightweightproduct. It is understandable that the A12 series processors are not used, justbecause of which iPad Air4 ranks closer to the iPhone series in respect ofscore.