The tough year of2020 is over finally. There should be no one in the world who wants to livethrough 2020 again. A variety of unimaginable disasters occurred around theworld in 2020, and it looks more like the end of the world in "2012"that was rumored many years ago.

Fortunately,everything has passed away at the end of 2020, and all problems will always besolved over time.

Today, we haveworked out the users preference ranking in the fourth quarter of 2020 based onthe backstage data of Antutu. What kind of mobile phone do Antutu users prefer?Let's see the outcome.

It should be notedthat Antutu preference ranking is based on the phone configuration of Antutuusers, so it does not represent the preference of the overall Android phonemarket.

Except these twoscreen sizes, the market share of other screen sizes is lower than that in thethird quarter, and the 6.6-inch screen size has the highest decrease rate of 4.8%.

At present, theproblem of mobile screen development is no longer whether it is large enough,but is how to improve the screen-to-body ratio. In fact, even the size of 6.6inches or 6.7 inches is acceptable now. Truly, there may be no market for small-screenflagships such as iPhone 12 mini. 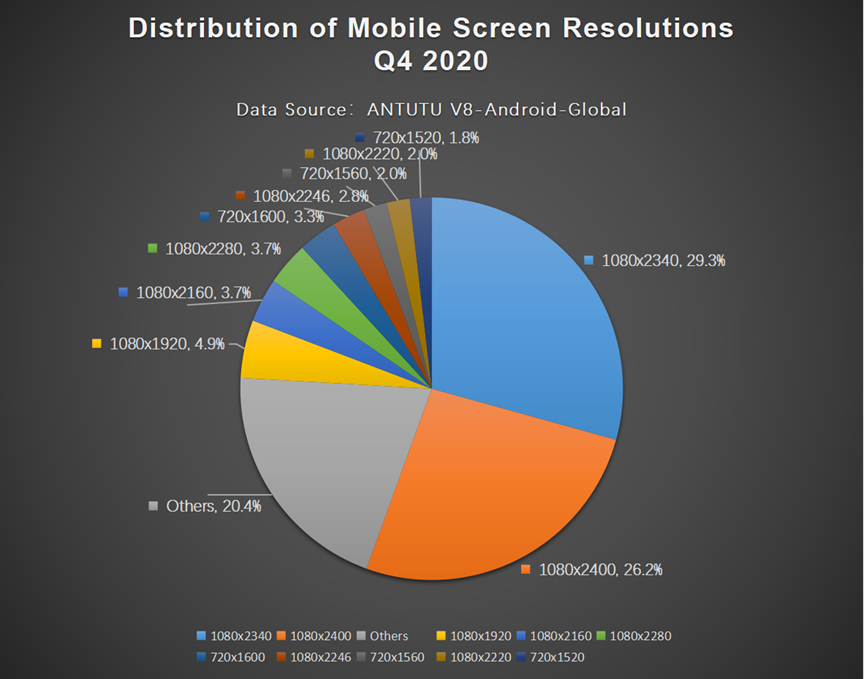 It should be notedthat, it is still 1080P, and such change results from the change in thecorresponding mobile screen size. Nevertheless, as long as the figure 1080 isinvolved in the resolution, it is still 1080P. Actually, screen resolutionstill fails to advance towards a higher 2K level. Instead, an increasing numberof new phones have been improved significantly in terms of the refresh rate.

In the aspect ofprocessor brand, the market share of Qualcomm processors rises by 1% to 58.5%(nearly 60%), compared with the third quarter. It is still strong.

MediaTek suddenly risesthanks to its overall layout of high-end, medium-end and low-end chips in thenew competition terrain of 5G, achieving continuous increase of market share.Its market share rises by 2.5% to 14.9%, compared with the third quarter.Although MediaTek's market share is still much lower than Qualcomm's 58.5%, it hasalready become the second largest processor brand of Android phones.

The market share ofSamsung and Hisilicon is 13% and 12.3%, respectively. The Exynos processor ofSamsung is now only used by Samsung itself and Vivo from China, so it is noteasy for Samsung to achieve such market share. This demonstrates that Samsungmobile phones still have a certain market share in the global market while the marketshare of Hisilicon Kirin chip may continue to fall because of the ban.

Number of cores(CPU): Market share of octa-core chips up to 96.3% 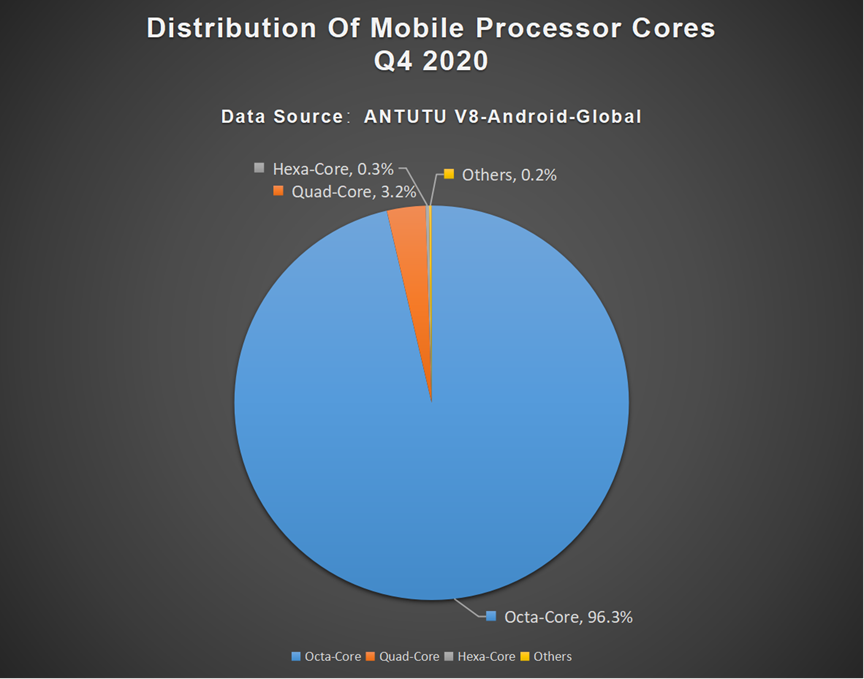 The market share ofocta-core chips continues to rise for a third consecutive quarter by 1.2% to96.3%, compared with the third quarter. However, the market share of other multi-corechips is reduced slowly.

After rounding off,almost all mobile phones are octa-core phones. Even though there are somequad-core and hexa-core mobile phones, they barely have any effect on thischart or the status quo, and they are just some outdated mobile phones.

However, it is theexistence of these outdated mobile phones that will make it difficult forocta-core phones to reach 100% market share. After all, it will take a verylong time to completely eliminate those obsolete phone models, mainly due to socialfactors.

Compared with thethird quarter, the market share of only 6G RAM, 12G RAM and 8G RAM rises in thefourth quarter, with the increase rates of 0.8%, 0.9% and 3.9% respectively.

Judging from the increaserates, 8G RAM has become the mainstream RAM configuration for current mobilephones. Although 6G RAM has the highest market share (35%) in the fourthquarter, it is easy to understand that with the launch of new mobile phones, 8GRAM will replace 6G RAM sooner or later. Insufficient RAM may make your mobilephone more and more sluggish. 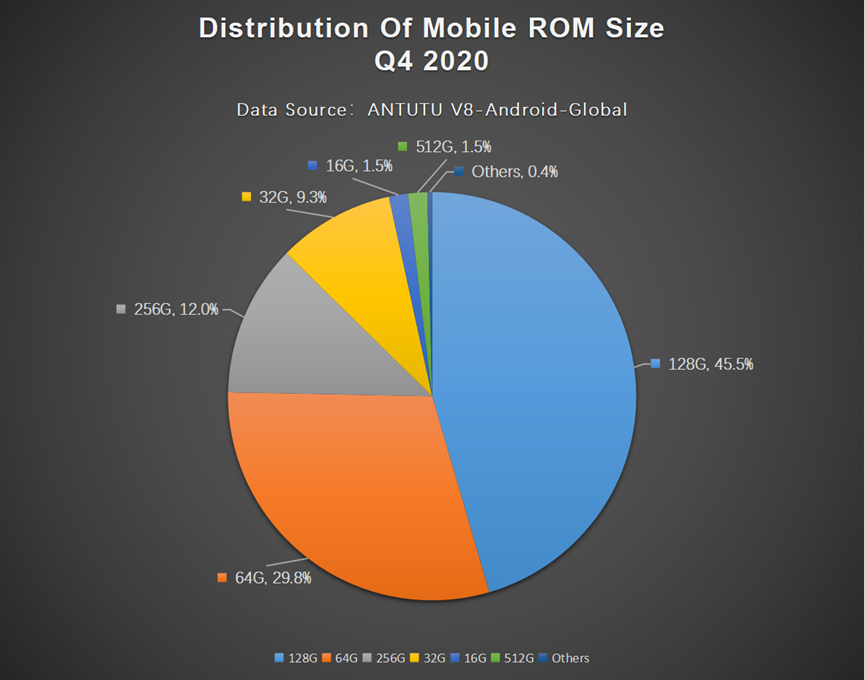 In relation tostorage capacity of mobile phones, 128GB ROM still ranks No. 1, as is expected.Its market share rises by 4.2% to 45.5%, compared with the third quarter. Afterall, the size of any one application may be dozens or hundreds of megabytes nowadayswhile the phone camera is generally configured with 48 megapixels, 64megapixels or 100 megapixels at least and the storage space of 64G ROM mobilephones may be filled up with just dozens of photos. Therefore, the minimumconfiguration of 128GB ROM is a must.

The market share of256GB ROM continues to rise by 2% to 12%, compared with the last quarter. Nowthat 128GB has become a minimum configuration of new mobile phones, the growthof 256GB is well-reasoned. After all, the mobile phones with high configurationnaturally require larger ROM.

The market shares of32GB and 64GB ROM continue to decrease by 2.5% and 3.4% respectively, compared withthe third quarter. The continuous decrease reveals that, 32GB ROM and 64GB ROM easilyfilled up with just a few photos and applications, should be replaced with aspeed like 5G network’s speed in the increasingly fast 5G era.

Android OS version:Percentage of Android 10 is close to 80% 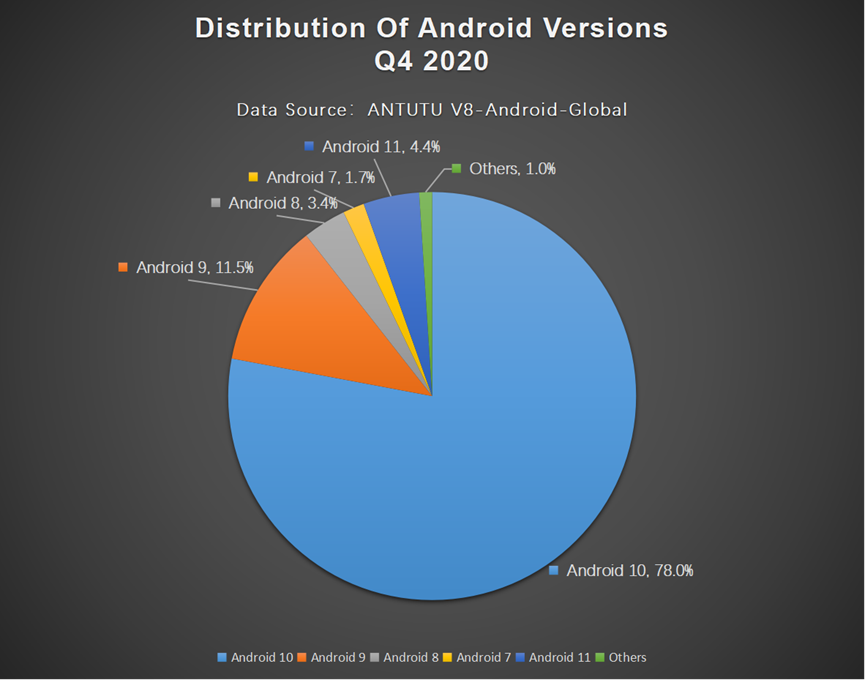 Based on thedistribution chart, Android 10 accounts for the highest percentage in thefourth quarter, up to 78%. It increased by 14.6%, compared with the third quarter,thanks to the rapid follow-up and optimization of various mobile phonemanufacturers. By contrast, Android 9 plunges by 16.2% to 11.5%. At present,Android OS develops towards getting better and more standardized, as we cansee.

For current Androidmobile phones, not only users want to use the newer system, but also mobilephone manufacturers are doing a good job of optimization and follow-up. Often,mobile phone manufacturers quickly follow up soon after a new Android OS versionis released to experience the change and upgrade of the new version, especiallythe upgrade of the security patch. Predictably, the chaotic situation in whichmulti-generation Android OS versions appear simultaneously as what in the earlydays of Android phone development is like, will be a thing of the past.

The above content isabout the global users preference ranking of Antutu in the fourth quarter of2020. Looking back the change of preference ranking in 2020, it is verypositive. The memory and screen get bigger and bigger, and Android system alsobecomes increasingly newer, securer and better. Compared to the entire awful2020, the development of mobile phones is still very positive and upward.

It should be notedagain that the ranking list only represents the preferences of Antutu users anddoes not represent the configuration distribution of the overall Android mobilephone market.