The data wascollected from December 1, 2020 to December 31, 2020 and the results on theranking list are average scores instead of highest ones. There are more than1,000 pieces of data for a single phone model. The data was calculated based onAntutu V8. If several memory capacity versions of any single phone model areavailable on the List, the version with the highest score shall prevail 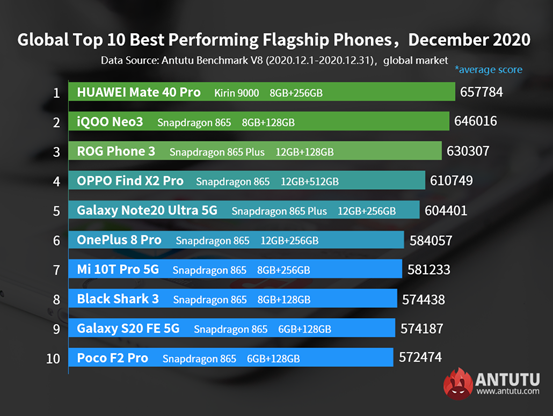 Xiaomi 11 powered bythe Snapdragon 888 flagship processor has been released, but it is onlyavailable in China, so Huawei Mate 40 Pro still leads the global market, withits average score of 657,784, a big win over iQOO Neo3 ranking No. 2 by morethan 20,000 points.

In the first fewdays of 2021, the news came out that Huawei, despite severe restrictionssuffered, seems to have not given up on processor development. Thenext-generation Kirin processor will be called Kirin 9010 and the 3nm process itwill be using can be viewed as an iteration of 5nm. Compared to the 5nmprocess, 3nm process will bring 25~30% power reduction and 10~15% performanceimprovement. Whether this news is true or not depends on the actual situationof Huawei in the second half of this year.

iQOO Neo3, which hadbeen out of the top three for years, rushed into the second place this time. Withthe Snapdragon 865 processor series, it even has a higher average score thanthat of ROG Phone3, a ASUS gaming phone, which is to be congratulated. We knowthat ROG Phone3 carries 865 Plus, a slightly more powerful version thanSnapdragon 865, so such a score can be viewed the glory of the Snapdragon 865era. Probably on the ranking list from next month, Snapdragon 865 era is comingto an end and the new flagship Snapdragon 888 has officially debuted.

Being the firstphone with Snapdragon 865 Plus processor and with the support of ASUS’s super gamingperformance, ROG Phone3 remained on the first place on the performance rankinglist for several months. However, with more and more new 5 nm flagshipprocessors making their debuts now and the difference in nature making thisveteran model a little bit out of its depth, ROG Phone3 only came in the thirdplace this time.

Two new phones onthis List are Galaxy S20 FE 5G and Poco F2 Pro. The former is a fan-onlyversion of Samsung’s S20 series and the latter is a new Xiaomi phone on theIndian market. These two phones are very cost effective and has good performance,so it is a natural thing for them to make the List,.

Compared with therapidly changing flagship phone market, the heat of mid-range phone market isobviously much lower, without release of new SoC and new models. So there islittle change in phone models on the list. Let’s take a look in details. 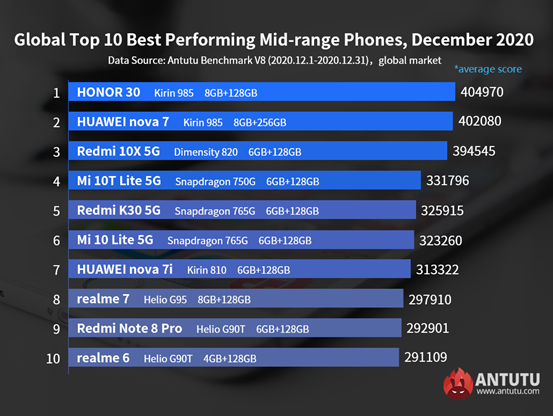 Since there has beenno new competitive mid-range phones released on the market, Honor 30 stilltopped the List this month, which has held the first place on the mid-rangephone performance list for the third consecutive month. It carries Kirin 985processor independently developed by Huawei, which is second only to theprevious flagship Kirin 990 in terms of performance. Therefore, Kirin 985processor is suitable to be used in mid-range phones, and crucially, it isbetter than Qualcomm’s mid-range Snapdragon processors. Therefore, Huaweicontributes a lot in terms of performance of processors of mid-range phones.

Huawei Nova 7, alsoequipped with Kirin 985 processor, still took the second place this time. Ithas been the quarterly champion of the second place of Global Top 10 BestPerforming Mid-range Phones. The biggest difference between HONR 30 and HUAWEInova 7 is their camera. HONOR 30 supports 5x optical zoom while HUAWEI nova 7supports 3x optical zoom. Other than that, they are pretty much the same thing,so there’s not much difference in their final performance. These two productsare also expected to occupy these two places for a long time in the absence ofrelease of new phones.

In terms ofmid-range phones, Redmi 10X 5G and Mi 10T Lite 5G made the List this time,which are developed by Xiaomi. It seems that Xiaomi still stands out in termsof performance as always, and it can also maintain a stable update frequency onthe global market and mid-range market.

That’s all about theranking list of Global Top 10 Best Performing Android Phones in December 2020.Since there are no new products released, the ranking list of global marketshas not changed much this time. Two Huawei models still occupy the first placeof flagship and mid-range phones. Congratulations to Huawei again.