Best Performing iOS Devices in November: All four iPhone 12 models made the list

After November, fourphone models of iPhone 12 series have been officially listed on sale. One ofthe biggest hopes in the mobile world this year came and all of Apple hardwareproducts updated this year have been listed. There should be no major changesto the iOS Performance Ranking List  untilApple’s new product launch event next spring.

Today, Antutureleased the iOS Device Performance Ranking List in November 2020 according tothe statistic data at our backstage. All phone models of iPhone 12 series makethe list this time and only one model of the older iPhone 11 series is still onthe list, so it’s very interesting.

It should be notedthat figures in this ranking list were calculated based on the iOS version ofAntutu V8 and collected for a period from November 1, 2020 to November 30,2020. The results in the ranking list are average scores instead of the highestscores, and thus more representative. 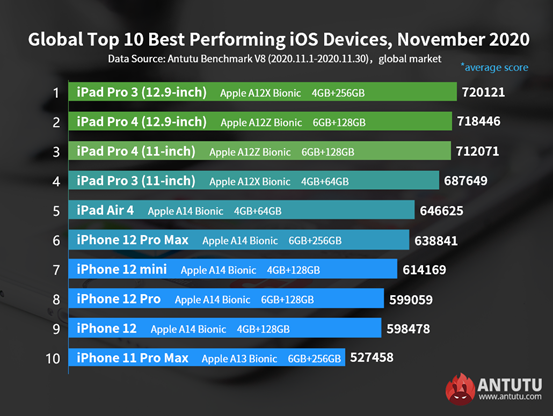 The product rankingin the third place this time is that ranked the third last month: iPad Pro 4(11-inch) is carrying A12Z processor, which is the same as iPad Pro 4(12.9-inch) ranking first, with their whole configuration broadly similar. Theonly difference lies in screen size, which is the product of the marketsegment. So those who want to buy iPad Pro 4 can make their choice according totheir needs for screen size.

So far, four iPhone12 models this year are still not among the top three. Although Apple A14processor of iPhone 12 series is strong, iPhone 12 cannot beat iPad Pro interms of size and hardware. Otherwise, there may be no market space for iPadPro.

Four new iPhone 12models this year ranked the sixth to the ninth place, but what’s interesting isthat they’re not listed in the same order as Apple’s official pricing order like of iPhone 12 Pro Max, iPhone 12 Pro, iPhone 12 and iPhone 12 mini.Specifically, iPhone 12 Pro Max ranks the first among the four models, which isundisputed, and its average score of 638,841 is comparable to the score of646,625 for iPad Air4 ranking the fifth, which reflects its powerfulperformance.

Such ranking iscaused by different iOS version number of these different models of iPhone 12series in the backstage, which has a certain impact on the score. Of course,this does not mean that the cheapest iPhone 12 mini should rank the last. Afterthe iOS version number gradually unified to the same version, we believe thatthe ranking of the four iPhone 12 models will be stable.

At the bottom of theranking list is the iPhone 11 Pro Max, the last glory of iPhone 11 era. Exceptthis top-level iPhone 11 model, the other two iPhone 11 models have dropped outof the Top 10. It’s a generational change, so let’s say goodbye to the iPhone11 era.

This is all aboutthe iOS Device Performance Ranking List in November. It can be predicted thatnext month will still see these 10 products on the final list in 2020. Anychange will not come until next March. Let’s look forward to Apple’s new productsin the next year.