The much-anticipated iPhone 12 series was released last month, a month later than that in previous years due to COVID-19. However, it did come, and as of today, the first two new models, namely, iPhone 12 and iPhone 12 Pro have been delivered to most buyers, so they made a successful appearance on the iOS device performance ranking list in October 2020.

Today, Antutu released our list of the global Top 10 best performing iOS devices in October 2020 according to the statistic data at our backstage. This time the ranking list has changed because of the entry of two new iPhones into the list. As the editor, I have always been calm with the ranking list, this time I finally got excited. So what are the rankings of these two new models? Let’s move on.

It should be noted that figures in this ranking list were calculated based on the iOS version of Antutu V8 and collected for a period from October 1, 2020 to October 31, 2020. The results in the ranking list are average scores instead of the highest scores, and thus more representative. 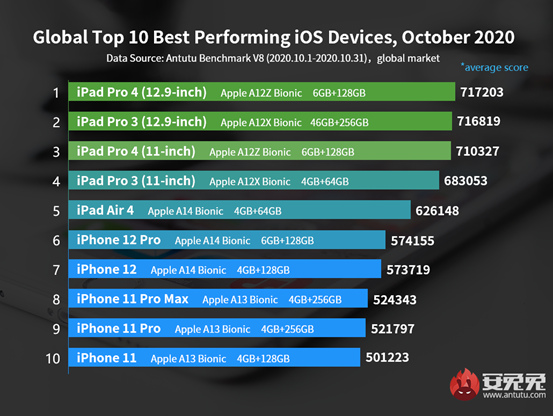 The iPad Pro 4 (12.9-inch), the most powerful iPad Pro in Apple’s mobile product family, has firmly ranked in the first place for a quarter in a row. Its bigger screen, higher refresh rate and higher hardware configuration are all factors that can affect the score. So even though iPhone 12 and iPad Air4 that adopt A14 processor have been released and obtained scores, they were still defeated by iPad Pro 4 (12.9-inch).

There have always been more iPad products on iOS praise ranking list. This time, came in the third place is also a product of iPad Pro: iPad Pro 4 (11-inch), which, the same as iPad Pro 4 (12.9-inch) ranking first, is carrying A12Z processor, with their whole configuration broadly similar. The only difference lies in screen size, which is the product of the market segment. So those who want to buy iPad Pro 4, can make their choices based on their needs for screen size..

With the top three announced, neither iPhone 12 nor iPhone 12 Pro appears on the list, which means that they can only be placed in the bottom seven.

Newly released iPad Air4, iPhone 12 Pro and iPhone 12 firmly ranked the 5th, 6th and 7th in this ranking list. All three are powered by Apple’s latest A14 processor, and there is no doubt about its performance. iPad Air4, due to its larger screen size and higher configuration, has a higher average score than the iPhone series, which is a normal phenomenon.