How time flies. The first half of 2020 has passed. During this period, apart from iPhone SE 2020, Apple hasn’t launched any other products. Therefore, the list of Top 10 Best Performing iOS Devices hasn’t changed too much.

Today, we have sorted out the data at the backstage and released the list of Global Top 10 Best Performing iOS Devices, June 2020.

The data are all calculated based on the iOS version of Antutu Benchmark V8. The data collection period is from June 1 to June 31. The scores shown are all average benchmark scores, not the highest ones, which are more representative. 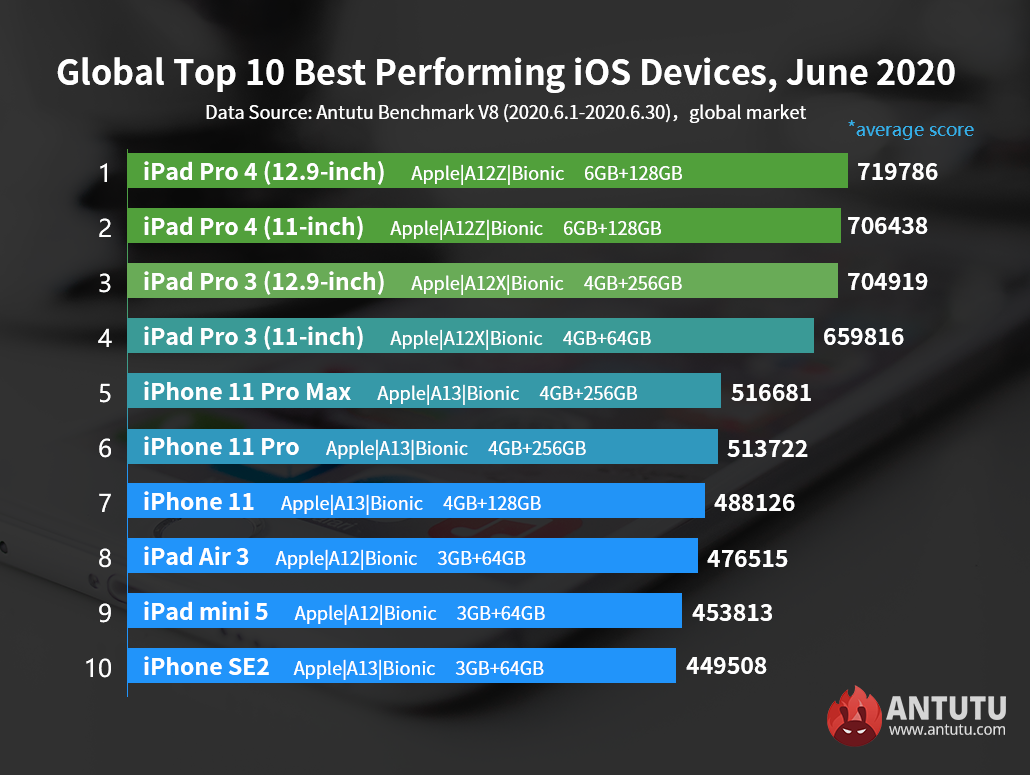 The fourth-ranking device is still iPad Pro 3 (11-inch), with the average benchmark score of 659816. Among all iOS mobile terminal products, iPad has shown its distinct advantages and no other products can compete with it in terms of performance. It can be seen that for iOS devices, iPad series is much better than iPhone products. In particular, the performance of A12X and A12Z processors is very high. Before Apple officially launches any new processor, it is considered that no products can perform better than them.

iPad Air 3 ranks the eighth, with the average benchmark score of 476515. Its ranking remains the same, but its average score is lower than that of last month.

Since iPad mini5 has been launched for over one year, it would have been rather hard for it to take even the last place in the list. However, the new iPhone SE hasn’t made it that hard. It turns out that the so-called “best-value” iPhone SE has, to some extent, let people down.

That’s all for the Top 10 Best Performing iOS Devices in June. WWDC2020 of Apple has been successfully held in June. No hardware products have been launched, but some new features of software indeed deserve people’s appreciation. What’s more, it is a very significant press conference because it will decide the future direction of Apple products.