It’s already June. Almost half a year haspassed in 2020. The flagship models for the first half year have been launchedto the market. In the following days, we don’t expect to see mobile phones withtoo high configuration. Maybe in the second half year, after September, we’llsee a new peak in launching new products.

Today, according to the backstage productstatistics sorted by Antutu, the Top 10 Best Performing Android Phones May 2020has been released. Now let’s have a look at new phones and their rankings inMay.

Same as before, we will release rankings ofboth flagship models and middle-range models at the same time. The rankingsmore depend on the SoC.

The data collection period is from May 1 toMay 31. The scores shown are all average scores, instead of the highest ones.For each model, over 1,000 items of product figures or statistics have beenanalyzed. The data are calculated based on Antutu Benchmark V8. 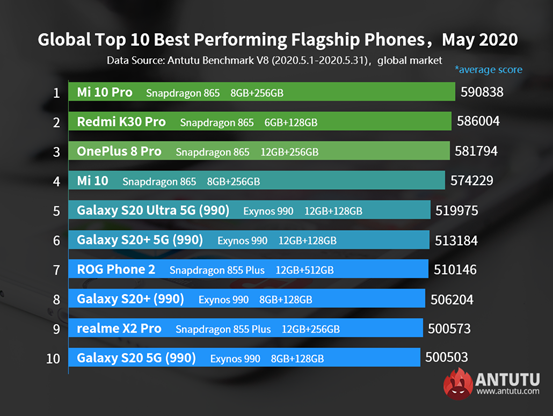 In May, on the ranking list of Androidphones performance, the top 1 was still Mi 10 Pro 8+256G, manufactured by China’smobile phone provider, Xiaomi. It has the overall benchmark score of 590838.Compared with last month, the score decreases a little bit. However, the overallscore of nearly 600,000 is still a proof that the performance is excellent. Itis rather reasonable as Xiaomi is famous for the good performance of its products.

The second on the list is Redmi K30 Pro6+128G, a product of the brand Redmi under Xiaomi. This model is the best oneamong Redmi series, whose overall benchmark score is 586004.

Now in the market, the screen with a holein the front is very popular. However, Redmi K30 Pro is different. It adoptsthe 6.67-inch “pop-up” full screen, so its screen-to-body ratio reaches 92.7%.At the back, it is designed with 3D four-sided curve body and “Oreo-style”arrangement of four cameras. The flashlight is located below the camera and thelogo of “Redmi” is located at the lower middle part at the back. Moreover, the3.5mm hole for earphones is kept.

The inspiration for the design of Redmi K30Pro comes from the star system. There are four color options: sky blue, moonwhite, space gray, and star purple. Models of the first two colors are made ofmirrored glass while those of the latter two are of frosted glass.

The third is also from Chinese manufacturernamed OnePlus and the specific model is OnePlus 8 Pro 12+256G, with the overallbenchmark score of 581794. OnePlus 8 Pro was launched on April 14. The mostimpressive feature is the flexible AMOLED pupil screen with 2K-resolution,whose refresh rate is 120Hz and the screen color accuracy reaches 1.07 billion.It earns the DisplayMate A+ rating and supports MEMC frame technology(supporting maximum 120 frames for videos). It is one of the top screens formobile phones.

The above three mobile phones all adopt theSnapdragon 865 processor, so their benchmark scores concerning overallperformance don’t vary too much. It’s understandable because the hardware thataffects the benchmark score is the same. Therefore, users don’t need to worrytoo much. Their selling points are distinct. When making the purchase decision,users only need to think about their true demands.

It can be seen that China’s manufacturersalways stand out by the performance of their new phones, especially Xiaomi, amanufacturer famous for performance. The configurations of its hardware are thebest in the market. Among the top four, three of them are newly-launchedproducts from Xiaomi. Without doubt, these mobile phones are the bestperforming Android phones now. 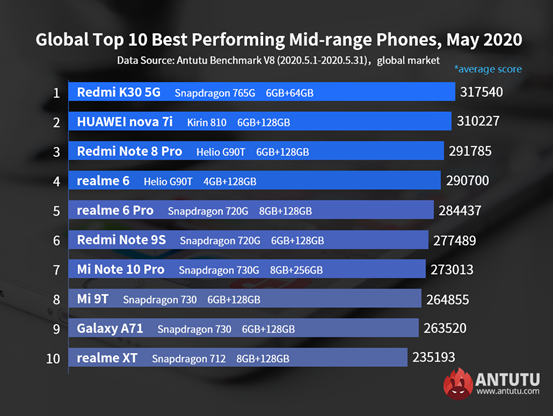 Redmi K30 5G was launched in January, 2020.It is the first smartphone shipped with Snapdragon 765G. Now that almost half ayear has passed, we can see its performance has been recognized by the market.

The third on the ranking list is Redmi Note8 Pro, which we’re very familiar with. Since its launch, it has been staying inTop 3 among all middle-range mobile phones. For several months in a row, it hasranked the first, which shows that G90T of MediaTek is really strong. Thistime, it has the benchmark score of 291785, which doesn’t change too much.However, since Redmi K30 5G has taken the first place, we can see that thingsmay change in the future.

realme 6, the latest version of realme,ranks the fourth, which is the same as the ranking in last month. Same as the secondplace Redmi Note 8 Pro, it is equipped with MediaTek G90T processor, with theaverage benchmark score of 290700. Users don’t need to worry about theperformance too much since their scores are almost the same.

The rankings don’t change much comparedwith that in April. From the sales performance, we can see that 765G is a quitesatisfactory processor for middle-range mobile phones. It can also supportdual-mode 5G network. It can be predicted that in the coming days, we will seemore and more new mobile phones equipped with this processor. Whether therewill be more competitors or not depends on the performance of new middle-rangeprocessors of MediaTek and Kirin.

On the ranking list of May, 9 of them areequipped with 5G processors. That is to say, with the same budget, people findit easy to accept 5G mobile phones. In the future, it remains to be seen when5G network signals can cover more places around the globe. It would be a greatpity if we have the mobile phones with so strong performance but the networksignal is not good.