In mid-March, Apple launched its newgeneration of iPad Pro powered by the new A12Z chip, with the starting price of$6,229, which is bound to occupy the top position of the iOS performance listfor a long time upon its release.

And rightfully so, the new iPad Pro remainsat the top of the iOS performance list for April with a very strongperformance.

The dataare all calculated based on the iOS version of Antutu Benchmark V8. The datacollection period is from April 1 to April 30. The scores shown here are allaverage scores, not the highest ones, which are more representative. 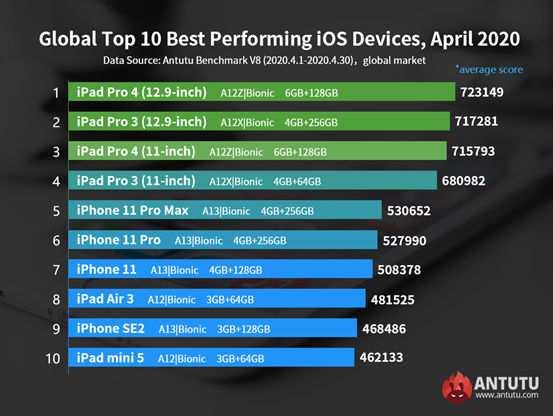 The highest overall score of iOS devices hasreached a horrible 700,000-point mark. The new iPhone SE2 released last monthis also equipped with the A13 chip, but this time it only ranked ninth with anaverage score of 468,486, which although is a huge gap compared with the firstplace, but for iOS devices, it is not easy to have a new product to enter thelist.

The top-ranked iPad Pro 4 (12.9-inch) ispowered by the A12Z chip, which has added a GPU core on the basis of the A12Xand therefore consists of an 8-core CPU and an 8-core GPU (the A12X is an8-core CPU + 7-core GPU). The A12Z's performance is theoretically a smallupgrade over the A12X, leaving aside unannounced factors such as frequency and processingtechniques. In terms of sub-score, it's true that the iPad Pro 4 series alloutperformed the older iPad Pro 3 (12.9-inch) in 3D performance, with a score differenceof around 20,000 points. If it were not for the advantages in storage, the iPadPro 4 (11-inch) would certainly outperform the older iPad Pro 3 (12.9-inch).

We can see from the benchmark scores thatthe performance difference between the A12Z and A12X is not that great, with A12Zonly showing some progress in GPU performance compared to A12X, and tests by someglobal media indicate that A12Z just enabled a GPU core that was previously disbledon A12X. Unfortunately, the big players are now squeezing toothpaste.

The new Phone SE, which has been waitingfor 4 years to finally be updated, has successfully entered the top 10 of theiOS performance list upon its release. As is customary for iOS devices, unlessanother new product is released, it too will find its place in this list and andhold it firmly.