Best Performing iOS Devices in March: the Most Powerful Mobile SoC Has Come

Inthe middle March, Apple, with no prior notice, has officially released the newgeneration of iPad Pro on its website, which is the first Apple device to bepowered by A12Z chip, with the starting price of 6229RMB.

Asexpected, the performance of this device is far better than many other Applemobile devices. From the rankings of Antutu in March, it can be seen that thenew iPad Pro has shown very powerful performance.

Thedata are all calculated based on Antutu Benchmark V8--iOS version. The datacollection period was from March 1 to March 31. The scores shown here are allaverage scores, not the highest ones, which are more representative. 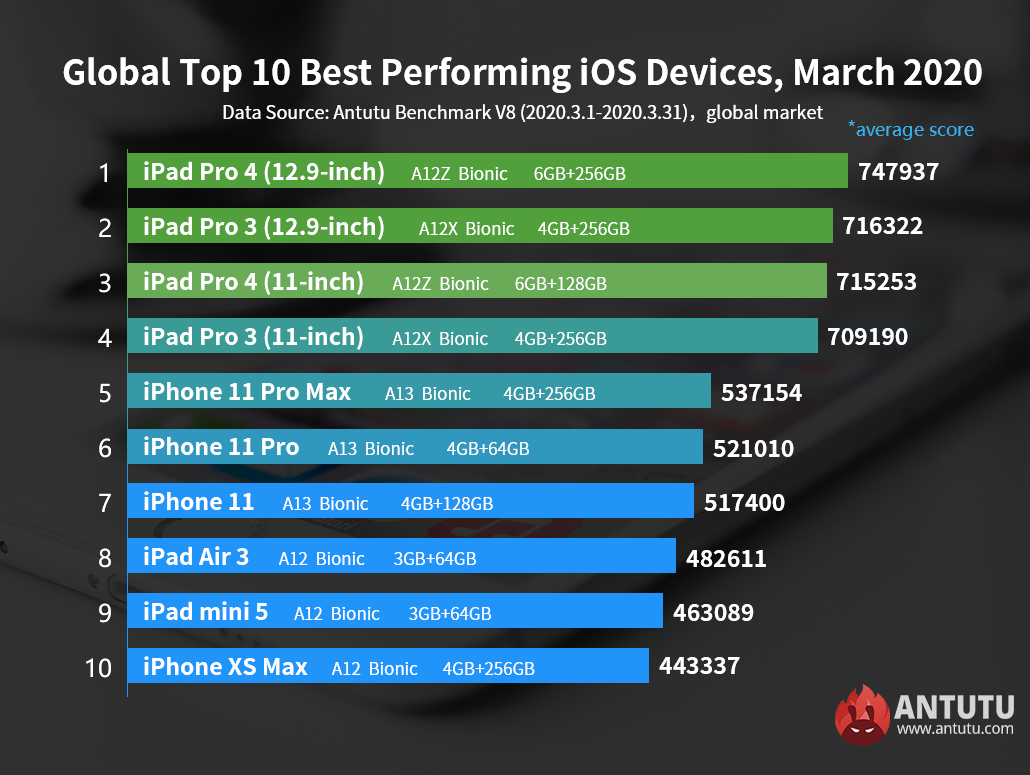 Asit is described in Apple’s official website, a GPU core has been added for A12Zon the basis of A12X, so it consists of an octa-core CPU and an octa-core GPU(A12X is octa-core CPU + hepta-core GPU). While setting the unreleased factors(clock rate/techniques,etc) aside, theoretically speaking, A12Z should showslight progress in performance compared with A12X. The sub-scores support thispoint. The 3D scores of iPad Pro 4 series are all higher than that of oldversion iPad Pro 3 (12.9-inch), with the difference of about 20,000 in scores.If it were not for the advantages in storage, the score of iPad Pro 4 (11-inch)will definitely exceed that of the device of old version.

Asa matter of fact, from the benchmark scores, it can be known that theperformances of A12Z and A12X do not vary too much. A12Z only shows someprogress in GPU. It is slightly upgraded, but we have to admit that A12Z isindeed the most powerful mobile SoC now.

Thedevice ranking the 4th is iPad Pro 3 (11-inch), with the storage of 256GB andthe average benchmark score of 709190. In terms of CPU, it is almost the sameas the 2nd-ranking device, but it’s less powerful in GPU and MEM. The storagemay be a disadvantageous factor, which is understandable. As for its laggingbehind in GPU, it can only be attributed to the fact that larger space canbring better heat dissipation effect, which is beneficial for A12X to operatecontinuously at high clock rate.

Thethree popular devices of iPhone 11 series released last year follow the tabletsin the rankings. They are all equipped with the A13 chip. The rankings are inorder: iPhone 11 Pro Max, iPhone 11 Pro, and iPhone 11, with the averagebenchmark scores respectively of 537154, 521010, and 517400.

Thesub-scores tell us that A13 and A12X have almost the same CPU performance,while the difference lies only in GPU. Therefore, A13 hasn’t caught up withA12X in terms of overall performance even though a new structure has beenadopted. It seems that an Apple device can only be overshadowed by anotherApple device.

Onething worth mentioning is that iPhone 9, which people talked much aboutrecently, is to be released in April, and there might be iPhone 9 Plus. If thenew products are coming, it will definitely bring some changes to the iOSrankings. Let’s look forward to it.