Today Antutu reveals our list of the TOP 10best performing iOS devices for November. Since there are no new iPhone productsreleased last month except for the new AirPods Pro and the 16-inch MacBook Pro,there are no big changes in the ranking of the iOS devices compared to lastmonth.

However, there are some changes in thescores of the iOS devices compared to last month as the November list is based on Antutu V8, in which we have included the new test scene Terracotta Warriors and updated the test algorithms. And it should be noted that the V8 scores are not comparable to V7 scores forthe reason mentioned above. Let's check out the detailed results below.

The data is collected between November 1, 2019 to November 30, 2019. The list consists of iOS devices that have at least 1,000 units running Antutu V8 and the scores are averaged across all devices rather than the highest recorded scores of each model, making the results more representative. Additionally, the list includes both iPhone and iPad products. 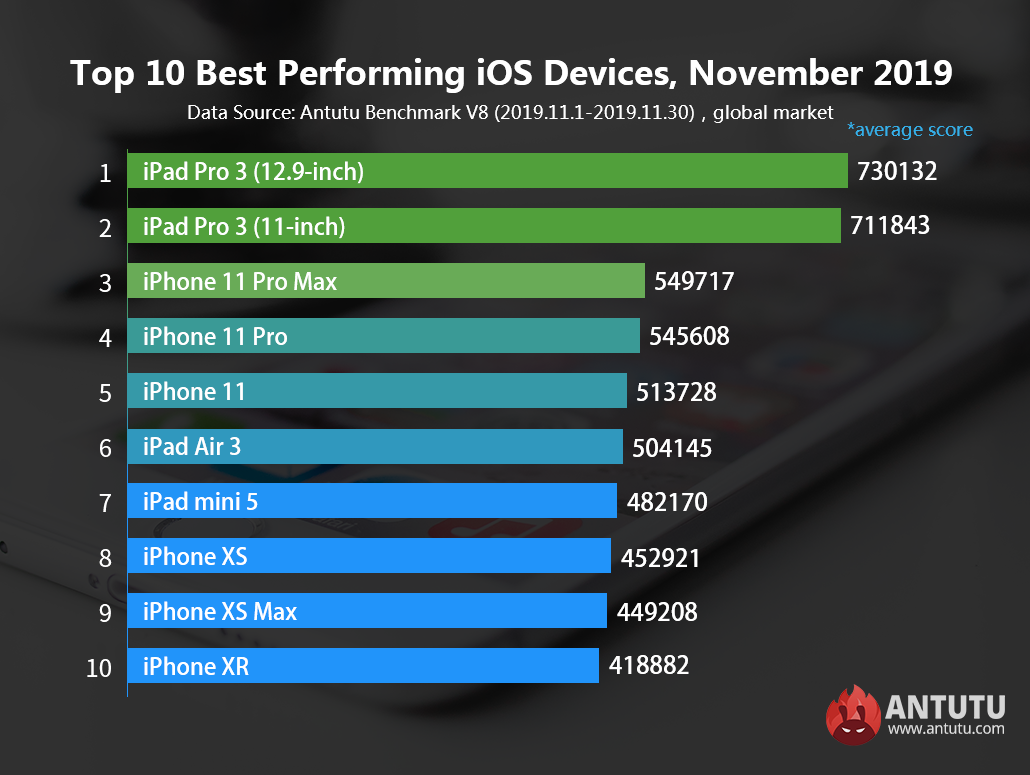 In November, the 12.9-inch iPad Pro 3 andthe 11-inch iPad Pro 3 continue to occupy the top two spots on the iOS list withan average Antutu score of 730,132 points and 711,843 points respectively, whichare much higher compared to last month as the scores are based on Antutu V8,but still proved the powerful performance of the A12X Bionic chipset. The two 2018iPads will be likely to remain on the top two spots until Apple releases new iPadproducts.

This result is not surprising as every generationof new iPhones would be the most powerful iPhones of the year once released. What’ssurprising is that the starting price of iPhone 11 is 1000 yuan lower than itspredecessor iPhone XR. Before 5G network is fully developed, the low price of iPhone11 makes it a great value.

Above is the list of global Top 10 bestperforming iOS devices for the month of November. The list is expected toremain stable in the coming months before Apple releases any new hardware products.It is said that iPhone SE2 will be announced next year in Spring, which may addsome vitality to the list.