It’s December now. Unlike same time in previous years when most smartphone manufacturers start to make year-end reviews, this year in December there are still some new smartphone releases to be expected from Xiaomi, Vivo and OPPO. All the new smartphones will be dual mode 5G smartphones, which can be a year-end bonus for smartphone fans.

What are the best Android phones on the market right now? Check out our most updated November ranking as measured by the average Antutu score.

Please note that the data are collected between November 1, 2019 to November 30, 2019. The list consists of Android devices that have at least 1,000 units running Antutu benchmark V8, and the scores are averaged across all devices, making the results more representative.

In November, the Asus ROG Phone 2 with 12GB of RAM and 512GB of storage continue to occupy the first place with an average Antutu score of 496,662 points. A few things inside of the phone contribute to this result: the Snapdragon 855 Plus SoC, the speedy UFS 3.0 storage, the 12GB of RAM and its unique three-layer cooling system that allows the phone to run with high performance for a long time without overheating.

Coming fourth is the realme X2 Pro 12GB RAM +256GB storage variant, achieving an average Antutu score of 476,185 points. The phone is the most powerful smartphone of the realme brand so far in terms of hardware performance.

In general, there are no big changes in the ranking of the top 10 flagship phones for November compared with last month. However, the entry of the two newcomers, realme X2 Pro and Redmi K20 Pro Premium Edition, has added some vitality to the list.

It should be noted that the models entering the Top 10 list may not be the premium editions of each series. Theoretically, premium editions may achieve higher scores due to higher storage configuration, but other factors such as power consumption and heat dissipation capability may also affect performance, after all hardware doesn't tell the whole story. 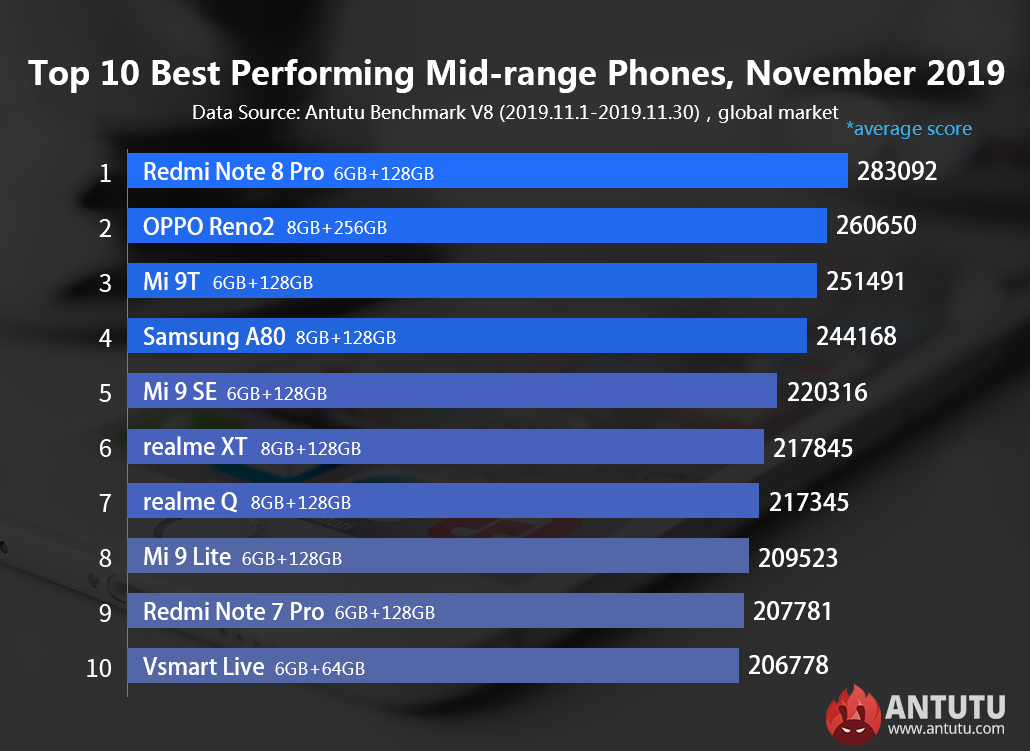 It is claimed by Qualcomm that Snapdragon 730G can provide 15% faster GPU rendering than Snapdragon 730 as it integrates an enhanced Adreno 618 GPU. In addition, the optimized graphics card and Wi-Fi latency manager can bring smooth and faster gaming experience. The chip also supports some Snapdragon Elite Gaming features. That’s why OPPO Reno2 outperformed Mi 9T.

In particular, the tenth-ranked Vsamrt Live comes from a Vietnam company-VinSmart, which belongs to Vingroup. The phone is powered by Snapdragon 675 SoC. It features a FHD+ AMOLED 6.2-inch screen, a 4000 mAh battery and support dual SIM cards.

Generally speaking, for mid-range phones, powerful SoC and UFS storage is a must for entering the top 10 list. Larger storage configuration or dual-channel UFS storage are pluses.

In December, new dual mode 5G smartphones powered by processors from Samsung,Qualcomm and MediaTek are expected to be released, when there will be great changes in our ranking list. Let’s stay tuned.