What are the best performers on the marketright now? Check out our most updated September ranking as measured by theaverage Antutu score.

Please note that the data are collectedbetween September 1, 2019 to September 30, 2019. The list consists of Android devicesthat have at least 1,000 units running Antutu benchmark V7, and the scores areaveraged across all devices, making the results more representative. Some devicesare not included in the list due to the number of their scores reported to theAntutu server doesn’t meet the statistical requirement. 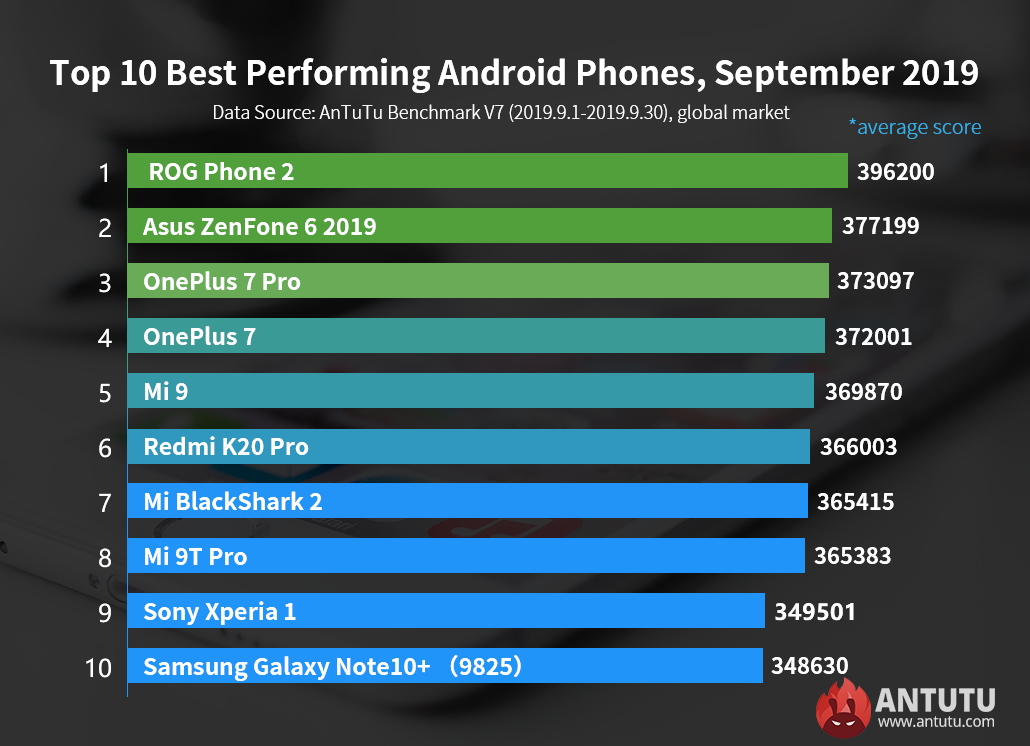 In September, ROG Phone 2 continues tooccupy the top spot with an average Antutu score of 396,200. The gaming phone’sslightly exaggerated appearance and the LOGO light with RGB lightingeffects distinguish it from regular smartphones.

In terms of hardware configuration, ROGPhone 2 is powered by Snapdragon 855 Plus processor paired with UFS 3.0storage. It comes with a massive 6000mAh battery and supports 30W fast batterycharging. In addition, it features a 6.59-inch AMOLED FHD+ display with a 120Hzrefresh rate. Thanks to the strong configurations, it can run mainstream mobilegames fluently.

Coming in second is Asus ZenFone 6 2019,which achieves an average Antutu score of 377,199. The phone is powered by Snapdragon855 processor. It features a 5000mAh battery with up to 8GB RAM. Since it isthe most recent Snapdragon 855 flagship, it has sufficient time to do performanceoptimization compared with other Snapdragon 855 smartphones released earlierbefore it, which allows it to deliver better performance than other smartphoneswith similar configuration.

Apart from powerful performance, the AsusZenFone 6 2019 also features a 48MP flip camera, a rear camera that flips up tobecome the selfie camera-an ideal choice for users who like taking selfies.

OnePlus 7 Pro remains at the third positionwith an average Antutu score of 373,097. This model is also powered by Snapdragon855 processor, paired with UFS 3.0 storage. It comes with a 2K+90Hz display.All these configurations provide a guarantee for the smooth running of thesmartphone. Nevertheless, OnePlus 7 Pro will no longerbe the flagship of OnePlus soon, as the company has already released the latest7T series, which will be driven by the Snapdragon 855 Plus and have greatimprovements in performance,

Following OnePlus 7 Pro is OnePlus 7 which rankedfourth on the list. This model is also powered by Snapdragon 855 processor withUFS 3.0 storage. Its performance is close to OnePlus 7 Pro.

Ranking at No.5, No,6, No.7 and No.8 arethe Snapdragon 855 powered Mi 9, Redmi K20 Pro, Mi BlackShark 2 and Mi 9T Pro, allof which achieve an average Antutu score of over 360k. In particular, the eighth-ranked Sony Xperia1 features the world’s first flagship phone to ship with 4k HDR OLED display witha resolution of up to 3840×1644, which is one of the biggest highlights ofphone. However, the battery capacity of the phoneis only 3300mAh, which means that it has shorter battery life than other flagshipphones.

Above is the global Top 10 best performingAndroid phones list for the month of September. For more information about theranking list, please visit Antutu official website or download AnTuTu Benchmarkand check in the menu of “Ranking”.