Today Antutu reveals our listof the global top 10 best performance smartphones for August 2018. What are thebest Android phones on the market right now? Check out our top 10 list as measuredby the average Antutu score.

1. Score: all the scores are averaged, not highestscore per model (actual running results may fluctuate, which is a normalphenomenon). 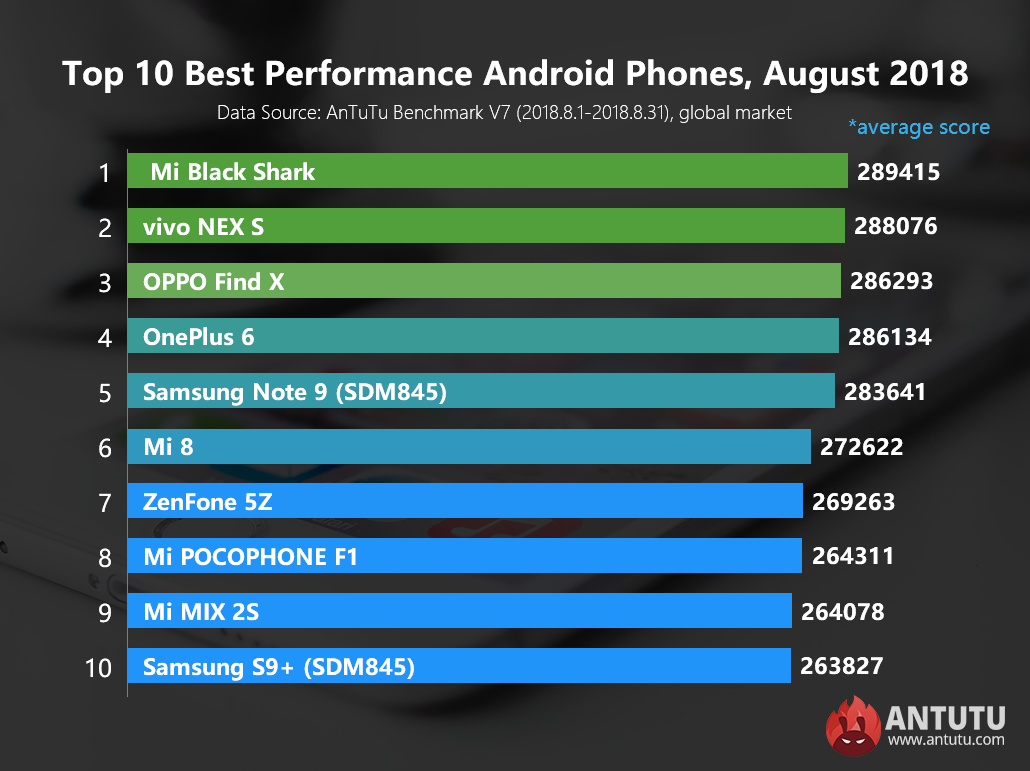 In August, Mi Black Shark gaming phone remains ontop once again with an average Antutu score of 289,415. The device leads thepack with its Qualcomm Snapdragon 845 processor, 8GB of RAM, and a liquidcooling system that helps it avoid overheating and perform better than othersmartphones with similar specs.

vivo NEX S comes in as close second with an averageAntutu score of 288,076. Although this device shares the same Snapdragon 845processor and 8GB of RAM with Mi Black Shark, its cooling design is not as powerfulas Mi Black Shark, therefore it doesn’t perform as well as the latter.

The third spot is taken by OPPO Find X which getsan average Antutu score of 286293. Since this device is also running onSnapdragon 845 processor with 8GB of RAM, its performance is only marginallylower than Mi Black Shark and vivo NEX S.

In general, this month’s top ten rankings are dominatedby smartphones powered by Qualcomm’s Snapdragon 845 processor once again. Thissituation is not likely to change in the coming two months until Huawei Mate 20series powered by Kirin 980 processor is released on October 16.

The above data reflects the changes of Android phoneperformance for August, 2018. For more information about the ranking list,please visit Antutu official website or download AnTuTu Benchmark and check inthe menu of “Ranking”.