During the last five months, a number of new flagship phones have been launched successively, including many Snapdragon-845 powered phones,and we've had a couple of new entries into our top 10 best performance Androidphones list including Mi Black Shark and OnePlus 6. Who has won the performance crown ofMay? Today Antutu reveals our benchmark results for the 10 bestperformance Android phones for May 2018. Come and check with us.

3. Data amount: at least 1000 data samples for a singlemodel.

In order to give you better reading experience, we have optimizedthe way we name some of the models on the list. 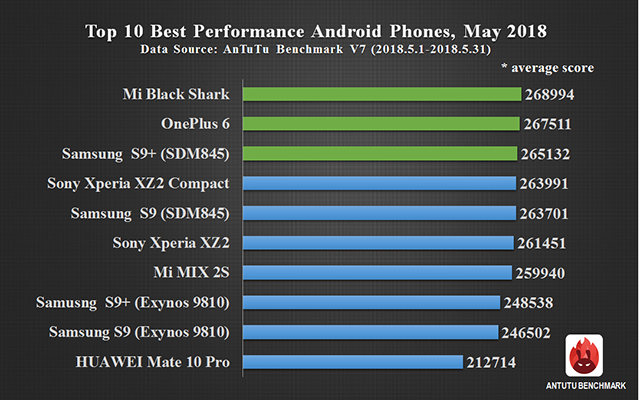 According to our most updated ranking list, Mi Black Shark replaced Samsung S9+ (SDM845/G965U) to bethe best performance Android phone of May with an average Antutu score of268,994. Mi Black Shark is a gaming phone invested by the famous Chinese phonemaker Xiaomi. It is powered by Qualcomm Snapdragon 845 mobile platform andoffers two alternative memory combinations of 6GB of RAM/64GB of internalstorage and 8 GB of RAM/128 GB of internal storage. The flagship-levelprocessor plus large memory, along with an integrated liquid cooling system laidsolid foundation for its strong performance.

The newly launched OnePlus 6 ranked second with an averageAntutu score of 267511. This model is also powered by Snapdragon 845 mobileplatform with CPU clock speed of up to 2.8GHz, paired with Adreno 630 GPU, andoffers 6GB/8GB of RAM.

In general, all the smartphones on thismonth’s top 10 list have got an average Antutu score of over 210,000. With morenew smartphones hitting the market, there will be more new entries in ourtop 10 list, including Xiaomi 8 which was recently launchedin China, and Asus ROG Phone, the gaming phone of ASUS, both of which boast an Antutuscore of over 300,000.