There is a beautiful Chinese saying thatis often used by a man to compliment the beauty of his girlfriend: “You are theApril of this world”. In this beautiful season when the grassis sprouting and the orioles are flying, the mobile industry is also beginningto embrace its April day. As a wave of new smartphones powered by the latest generation of Qualcomm processors hitting the market, Antutu performance ranking list for Android phones has had earth-shaking changes. Today Antutu reveals our benchmark results for theglobal 10 best performance smartphones of March. Is your phone on the list? Comeand check with us.

1.Score: average scores, not the highest scores (the actualrunning results may fluctuate, which is a normal phenomenon).

3.Data amount: at least 1000 data samples for a singlemodel. 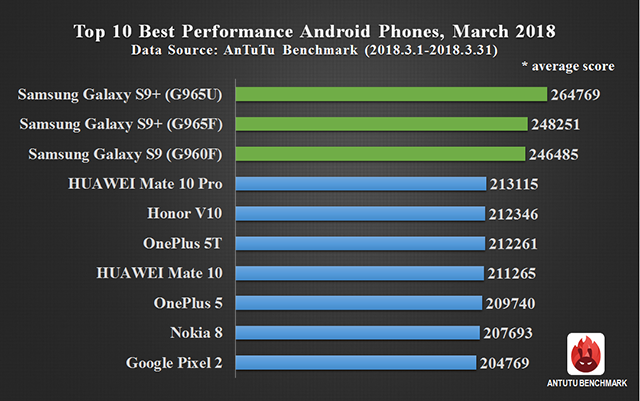 In general, we can see that Qualcomm Snapdragon 845 mobile platformdominated Antutu March ranking with absolute advantages. Meanwhile, with Kirin970 processor, the flagship smartphones of Huawei also entered the top ten. Itshould also be noted that Snapdragon 835-powered smartphones can still achieve an averageAntutu score of over 200k and are still good choices for those who don’t havehigh expectations for mobile processors.

The above data reflects smartphone performance for March2018. For more information about the ranking list, please visit Antutu officialwebsite or download AnTuTu Benchmark and check in the menu of “Ranking”.