It’s September again. The launch event of Apple’s latest generation of the iPhone (may be called iPhone 8) is fast approaching. Before the arriving of the new iPhone, which smartphones deliver the best performance in August? Is your phone on the list? Today Antutu reveals our benchmark results for the 10 best performance smartphones of August. Come and check with us. 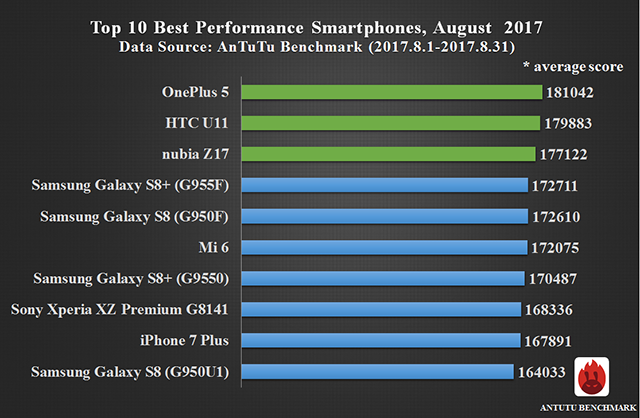 Turning to the Android list. excluding iPhone 7 Plus, OnePlus 3T broke into the Top 10 list with an average Antutu of 158,057. In particular, the refurbished Note 7-Samsung Galaxy Note FE made it onto Antutu Top 50 list, ranking 21th. Rankings of the iOS devices showed little fluctuations compared to our previous results in July. iPad Pro (10.5-inch) continued to top the list with an average Antutu score of over 220,000 with absolute advantage, followed by iPhone 7 Plus and iPad Pro (9.7-inch). The above data reflects the rankings of smartphone performance for July 2017. We also listed the top 50 performance smartphones in Antutu official website. For more information, please visit Antutu official website or download AnTuTu Benchmark and check in the menu of “Ranking”.

In general, before Apple A11 processor appears on stage, Antutu performance ranking list tends to be stable. With new models like iPhone launching in September, there will be great changes in Antutu ranking list. Please stay tuned for our September ranking.