Octa-core Processors: They are Different!

Along with the rapid development of mobile industry, great progress has been made in the development of mobile processors over the years. Now, it’s common for us to see smartphones powered by quad-core, octa-core and even ten-core processors in the current market. Statistical data in Antutu Report entitled TOP 10 Global Popular Smartphones and User Preferences, Q3 2016 suggested that in the third quarter of 2016 octa-core CPU has become mainstream configuration in the smartphone market, accounting for over 50% of the whole market share. How do the processor cores are set up in an octa-core processor? How do different octa-processors compare with one another in terms of CPU performance? 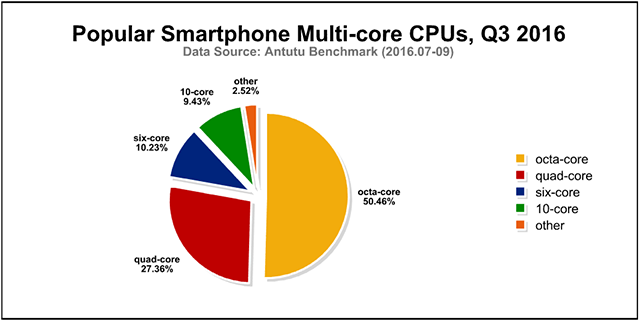 Note: scores of the above histogram were taken from Samsung Galaxy C7 (Snapdragon 625)

Qualcomm Snapdragon 652 also belongs to the Snapdragon 600 series processors. It adopts the 28nm manufacturing process, based on the big.LITTLE octa-core CPU configuration, with four high-performance ARM Cortex-A72 cores and four energy-efficient Cortex-A53 cores with CPU clock speed of up to 1.8GHz, paired with Adreno 510 GPU.

Note: scores of the above histogram were taken from Samsung Galaxy A9 (Snapdragon 652)

Samsung Exynos 8890 is Samsung’s premium application processor, which is built on 14nm FinFET LPP process technology. It has eight CPU cores based on ARM big.LITTLE architecture including four big Samsung custom cores clocked at 2.3GHz alongside four LITTLE energy-efficient Cortex- A53 cores clocked at 1.6GHz, which can dynamically allocate tasks to the right processor according to their instantaneous performance requirement. The LITTLE energy-efficient cores handle simple tasks. When advanced tasks are needed, such as 3D gaming, however, the high-performance custom cores will kick in. 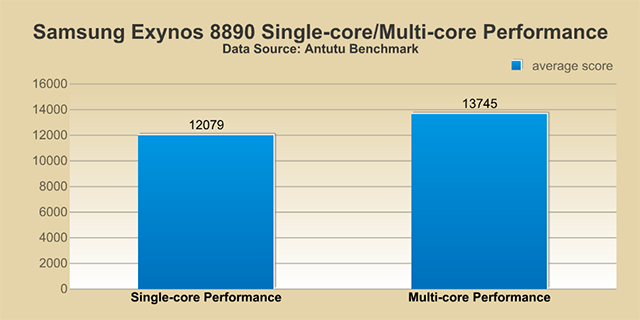 Note: scores of the above histogram were taken from Samsung Galaxy S7 (Exynos 8890)

HiSilicon Kirin 960 which received wide public attention recently is also an octa-core processor aimed at high-end market. It is built on 16nm manufacturing process, with four Cortex-A73 cores clocked at 2.4GHz and four Cortex- A53 cores clocked at 1.8GHz which also used the big.LITTLE architecture. Kirin 960 can employ each CPU core according to different use cases and work coordinately in daily use.

Note: scores of the above histogram were taken from Huawei Mate 9 (Kirin 960)

Kirin 960 has excellent performance in its CPU single-core test and CPU multi-core test due to its four Cortex-A73 cores. In particular, it scored over 130,000 in CPU multi-core test, only second to Samsung Exynos 8890. The typical Kirin 960-powered smartphone is Huawei Mate 9.

MediaTek helio P10 is a mid-range octa-core processor, built on TSMC’s 28nm HPC+ process, comprised of 8 Cortex-A53 cores with CPU clock speed of up to 2.0GHz, paired with a dual-core Mali-T860 GPU. In general, MidiaTek helio P10 has a well-balanced configuration. 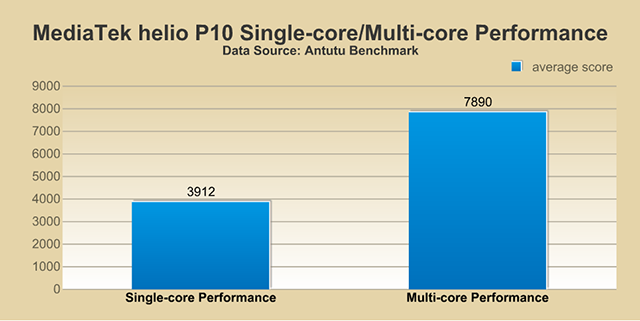 Note: scores of the above histogram were taken from OPPO R9 (helio P10)

Now we can see that there do exist many differences among different octa-core processors in terms of manufacturing process, CPU architecture and CPU clock speed, etc. For the moment, octa-core design is still a good approach to smartphone chip design. A combination of different cores can generate chips of different levels which can meet different market demands. In particular, Qualcomm Snapdragon 625 uses the most advanced manufacturing process (14nm) of octa-core processors at the moment, which supports a winning combination of high-end features and low demand on battery life. HiSilicon Kirin 960 shows us the development strength of Chinese chip makers which are catching up with American, Korean chip makers. The octa-core processors of Samsung and MediaTek are also popular with their target customers and has certain market potential.