It’s already August, not far from Apple's fall event. Although Apple revealed in the latest conference call that the release of this year's new iPhone will be delayed by a few weeks, but it still does not affect the expectations of many Apple fans.

Today, based on the backstage statistics, Antutu releases our list of the global Top 10 best performing iOS devices for July 2020. Like last month, this time the iOS list is still calm and quiet, with little movements in the rankings.

It should be noted that the data are all calculated based on the iOS version of Antutu Benchmark V8. The data collection period is from July 1 to July 31. The scores shown are all average benchmark scores, not the highest ones, which are more representative. 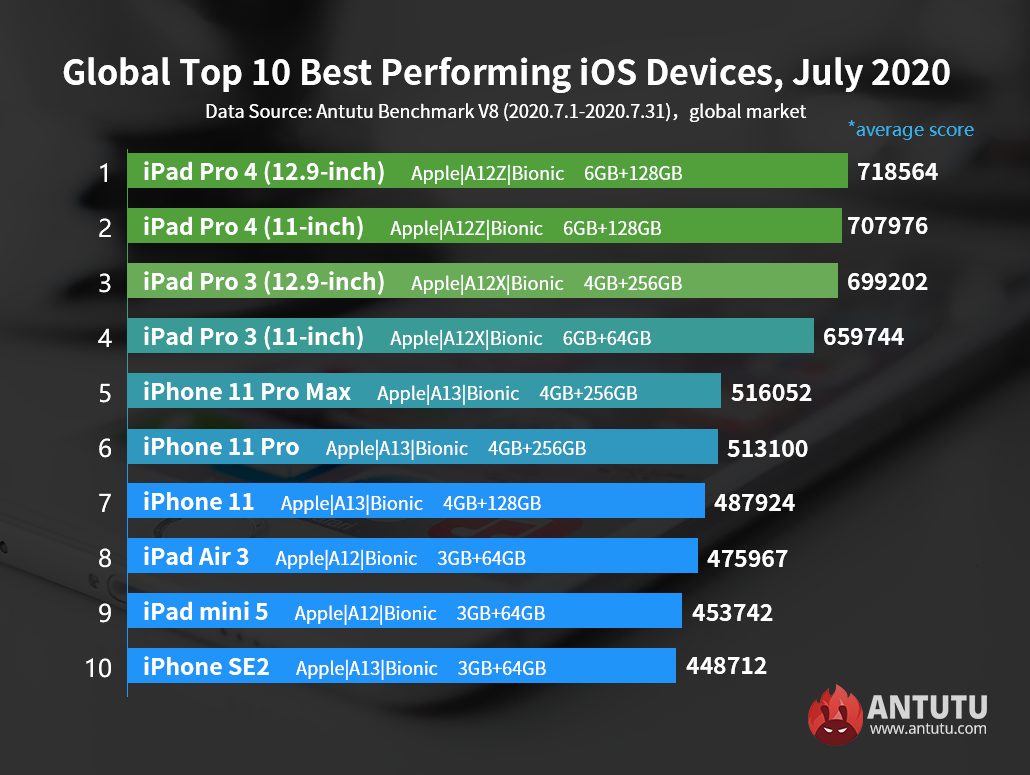 A12Z is Apple's latest mobile processor, which adds a GPU core based on A12X, so it consists of an octa-core CPU and an octa-core GPU. Through the comparison of sub-scores, the A12Z's performance is slightly higher than the A12X. In fact, the two are not really pulling too far apart, and while there is suspicion of toothpaste squeezing, we must admit that the A12Z is the most powerful mobile SoC available.

The third and fourth ranking devices are the iPad Pro 3 series, which have been dominating the list for a long time, with average scores of 699,202 and 659,744 respectively. Both devices are equipped with the A12X processor, with a score gap of nearly 40,000 points, due to the fact that the iPad Pro 3 (12.9-inch) is equipped with 256GB of storage, which enables a higher memory score than the iPad Pro. 3 (11-inch) which only has 64GB of storage. Meanwhile, the CPU and GPU scores of iPad Pro 3 (12.9-inch) also rose slightly, thanks to the large size with enough space inside, providing better cooling.

In addition, a comparison of sub-scores shows that the A13 and A12X have almost identical CPU performance, and the A13 lags behind only in GPU performance, indicating that the performance gap between the two is not too great. According to Apple's release laws, next year is expected to usher in a more powerful A13X.

That’s all for the list of Top 10 best performing iOS devices in July. It is expected that these models will still be on the list next month until Apple releases iPhone 12 series.