The list is based on data collected from Antutu database between January 1, 2020 to January 31, 2020. It consists of iOS devices that have at least 1,000 units running Antutu V8 and the scores are averaged across all devices rather than the highest recorded scores of each model, making the results more representative.

It should be noted that the scores on the list are based on Antutu V8, in which we have included the new test scene Terracotta Warriors and updated the test algorithms, and therefore not comparable to V7 scores.

Since Apple doesn’t release new devices recently, there are no big changes in the rankings of this month compared to last month. The entries in the Top 10 iOS list are still the latest Apple devices. 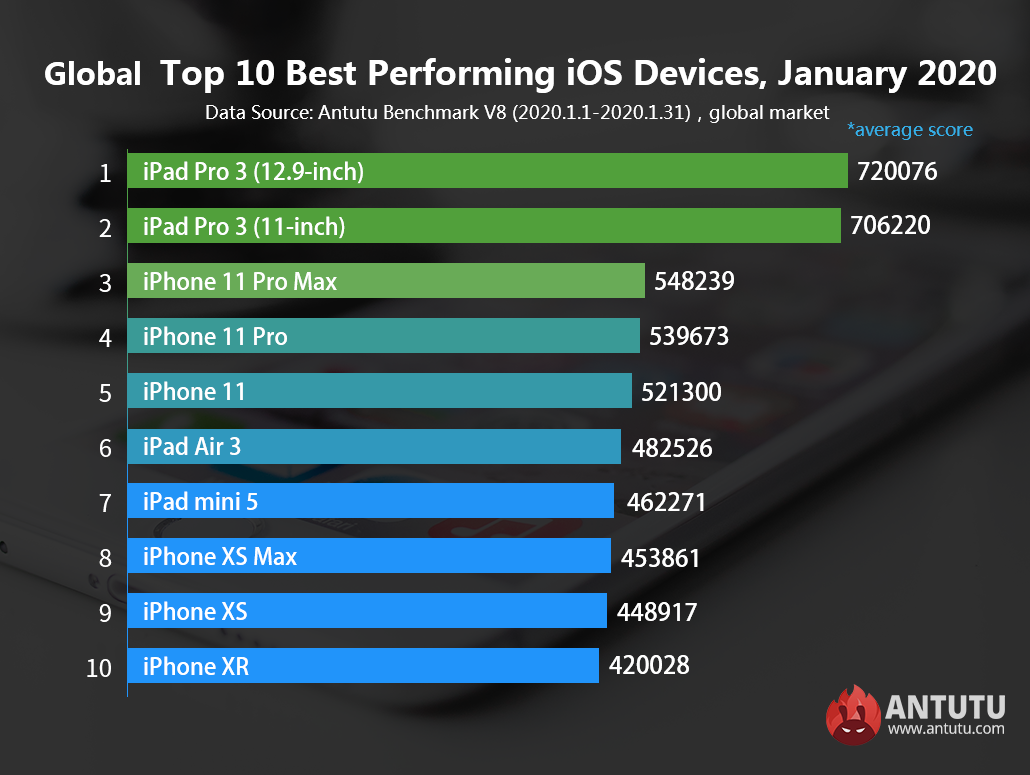 In January, the 12.9-inch iPad Pro 3 and the 11-inch iPad Pro 3 continue to occupy the top two positions on the iOS list with respective Antutu scores of 720,076 and 706,220 points. Both the two 2018 iPads are powered by Apple’s most powerful chip, A12X Bionic, and have similar core configurations. The reason for the score difference is that larger device can provide larger space for heat dissipation and can deliver more stable performance when running in high-performance mode.

Many users are disappointed with last year’s iPhone 11 series because of the notch screen and the lack of 5G technology. But we can look forward to the new 5G iPhones that are expected to be released in September this year. In addition, Apple is said to hold new product launch event in March and release the new generation iPad Pro and iPhone 9. If true, the new devices would definitely change the ranking list. Let’s stay tuned.

Above is the list of global Top 10 best performing iOS devices for the month of January. For more information about the ranking list, please visit Antutu official website or download AnTuTu Benchmark and check in the menu of “Ranking”.