Recently Apple and Qualcomm have agreed to settle all ongoing lawsuits they had filed against each other. The settlement includes a payment from Apple to Qualcomm and a multi-year chipset supply agreement, suggesting that Apple will use Qualcomm's modem chips again in Apple's future iPhone models and thus 5G iPhone is likely to make its debut. However, before Apple’s launch event this year, it still remains to been when 5G iPhone will be available.

Today Antutu reveals our list of the global top 10 best performing iOS devices for April 2019. What are the most powerful iOS devices on the market right now? Come check with us. 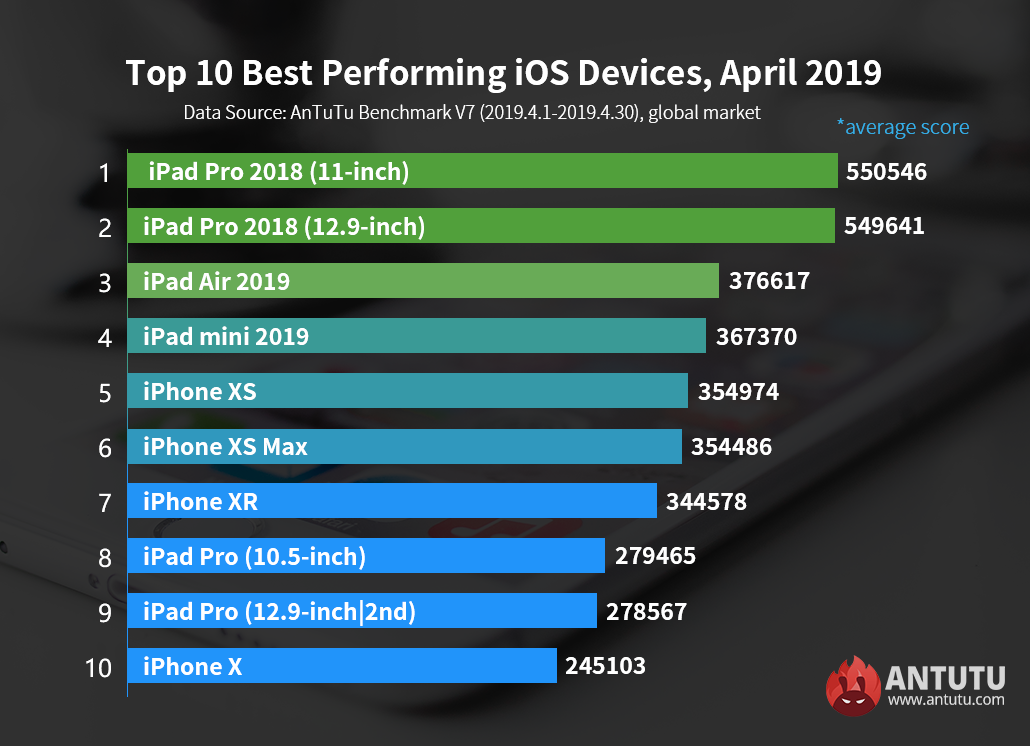 According to our most updated iOS list, the 11-inch iPad Pro 2018 and 12.9-inch iPad Pro 2018 occupy the top two positions once again with an average Antutu score of 550,546 and 549,641respectively. Both the two 2018 iPads are powered by the A12X Bionic chipset which is built on a 7nm process and has an eight-core CPU, a seven-core GPU, and a state-of-the-art Neural Engine that can perform up to 5 trillion operations per second. Moreover, the A12X Bionic has 10 billion transistors that allows it to outperform its predecessor with significant advantage.

The iPad Air 2019 and iPad mini 2019 ranked third and fourth with respective Antutu scores of 376,617 and 367,370. Both the 2019 iPads share the same A12 Bionic chipset with the latest generation iPhones, but with lager size and therefore larger battery, they enable longer battery life than the iPhones.

iPhone X secured the last spot with an average Antutu score of 245,103 points. iPhone 8 doesn’t make it to the list this month due to the entry of the new 2019 iPads to the list.

In general, there are no big changes in the ranking of iOS devices in April compared to that of last month, and the ranking order is expected to remain stable in the coming months until the arrival of the next generation iOS devices.