Today Antutu reveals our list of the global top 10 best performing Android phones for March 2019. With many new models powered by Snapdragon 855 going on sale in the past month, the performance ranking for March has been totally rewritten compared to that of February. Is your phone on the list? Come and check with us. 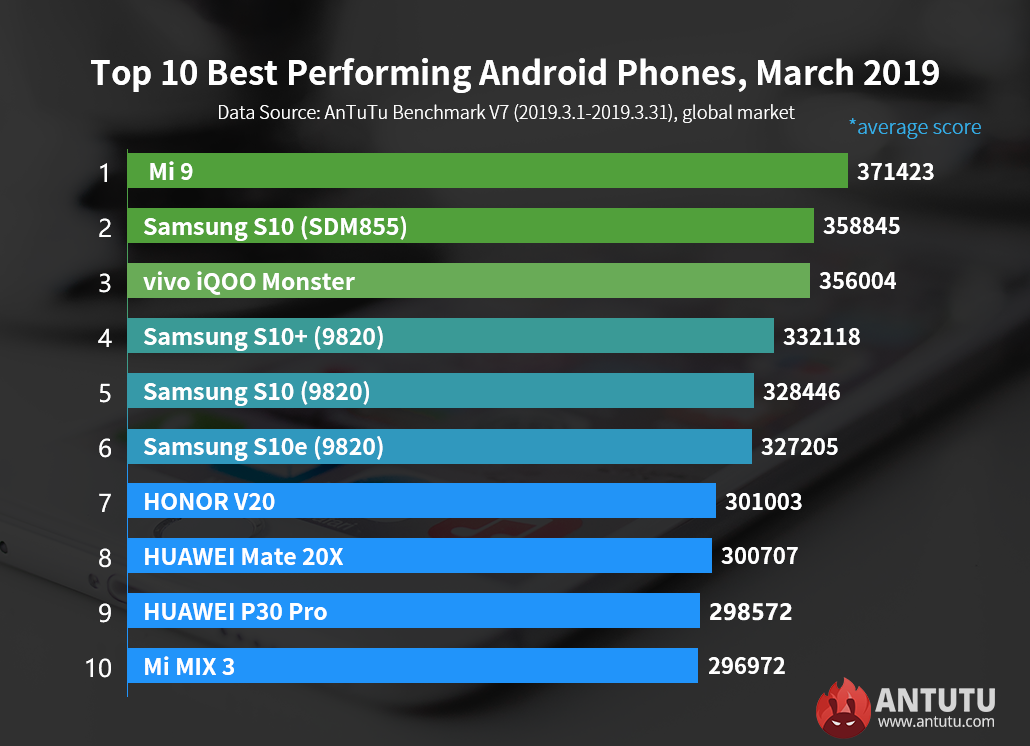 In March, the first spot is taken by Xiaomi’s recently launched flagship, Xiaomi Mi 9, with an average Antutu score of 371,423 points. The phone is powered by Snapdragon 855 chipset and offers up to 8GB of RAM.

Coming in second is Samsung S10 (SDM855), which scored 358,845 points. Samsung S10 (SDM855) shares the same Snapdragon 855 chipset with Xiaomi Mi 9, but its CPU scheduling is less aggressive than that of Xiaomi Mi 9, which can enable the running of eight CPU cores at full load for longer amount of time, although at the cost of more power consumption.

The third spot goes to vivo iQOO Monster, which gets an average Antutu score of 356, 004 points. It is also powered by Snapdragon 855 chipset with 12GB of RAM. Its CPU scheduling is relatively conservative with a bias towards battery life compared to that of Mi 9.

From the above ranking chart, we can see that Mi MIX3 is the only Snapdragon 845-powered smartphone listed among the top 10. With more Snapdragon 855 devices entering the list in the coming months, Snapdragon 845 devices will be gradually squeezed out of the top 10 list.