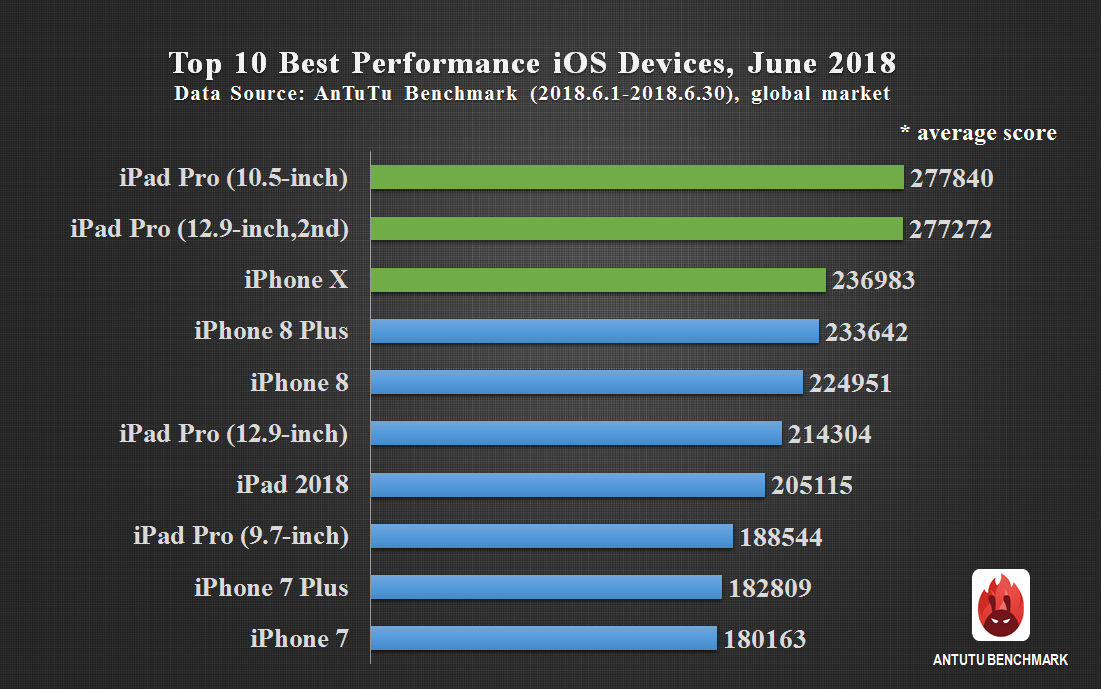 The iPad Pro(10.5-inch) and iPad Pro (12.9-inch,2nd) were both announced in the middle of 2017. Both of the two models are powered by the strong six-core A10X Fusion processor which delivers strong performance and effectively guarantees the fluency of the system. The main difference between the two models is the display size.

Meanwhile, iPhone X, iPhone 8 Plus and iPhone 8 ranked third, fourth and fifth on the list respectively. All the three models are powered by A11 Bionic processor and gained an average Antutu score of about 230,000. They are first-tier iPhone products available in the market right now.

In particular, iPad 2018 is a new tablet computer announced by Apple this year. It comes with a 9.7-inch Retina display and A10 Fusion processor and ranked seventh on the list.

It should be noted that since the iOS version of Antutu Benchmark v7 has added two new 3D test scenes to test gaming performance and performance limit of smartphone GPU, the overall score will be different compared to the previous version 6.

In general, we speculate that there will be no new entries on the list before Apple’s usual September event when Apple announces new iPhone products.

With the iOS 12 update, there will be some improvements in both performance and system fluency, as well as an increase in Antutu score for all iOS devices.

The above data reflects the changes of the performance of iOS devices for June 2018. For more information about the iOS ranking list, please visit Antutu official website or download AnTuTu Benchmark and check in the menu of “Ranking”.