During Double 11, many smartphone manufacturers launched promotion campaigns, and many users chose to change their smartphones at this time. Then there comes the question, which smartphones were more popular with Chinese users? Today Antutu reveals our Chinese smartphone user preference report of November which reflects user preferences of Chinese people from different aspects.

The above list is the Top 10 popular smartphones ranking result of November, among which the blue green offline sales giants OPPO and vivo had outstanding performance. vivo X9 topped the list with excellent self-timer performance and intensive advertising campaigns, while OPPO R9s which also focus on camera feature ranked sixth. Huawei Mate 9 was released in the middle of November, so its sales could not compare with that of December. There is always no lack of customers for low-end models, plus the price cuts in Double 11, some cost-effective smartphones such as Redmi Note 3, Redmi 4 and Meizu Note 3 appeared on the list.

From the list, it’s not difficult to see that smartphones with such selling points as high cost performance, business and self-timer function are more likely to win recognition from customers.

There were no big changes in popular smartphone screen resolution distribution compared to that of October. Many newly released models adopted the mainstream 1080p (1920×1080 px) display, increasing the overall market share of 1080p display while the market shares of 2K display (2560×1440 px) and 720P (1280×720 px) display showed a decline. 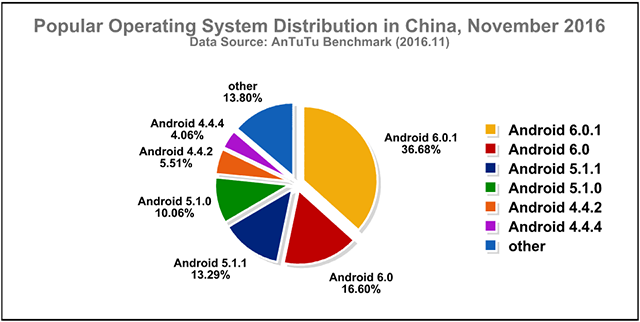 The preference of Chinese users for mobile operators is relatively stable. China Mobile dominated the market with absolute advantage of 61.54% market share. Recently, China Unicom cooperated with some Internet platforms such as Tencent and AliPay and introduced a series of data traffic cards which saved many users to some extent but can only secure its market share at 23.08%. The market share of China Telecom showed an obvious decline to the current 15.38%.

Nowadays, most ordinary people are able to afford a mobile phone. From ranking list of Top 10 Smartphone User-active Provinces or Cities in China, November 2016, as the most populated areas of China, the first-tier cities(province) Beijing, Shanghai, Guangzhou(Guangdong) all appeared on the list. The number of active users in big economic provinces such as Shandong Province, Henan Province, Jiangsu Province and Sichuan Province were also high. Guangdong Province topped the list with the most active users of smartphones, which is two times higher than that of the second ranked Shandong Province.