After the new model launch boom of Golden September and Silver October, many people might still be thinking about the sincere flagship models. In November, many new models have been launched successively with various innovations, but the number of new high-performance models decreased. Large-scale update boom of the performance ranking list has finally come to an end for the moment. What’s new in the performance ranking list of November? Antutu reveals our benchmark results for the 10 best performance smartphones in November. Come and check with us now.

1.Score: the average score of each model, not the highest score (the actual running results may fluctuate, which is a normal phenomenon).

3.Data amount: At least 2000 data sample for a single model.

Note: All the results in the data are average scores, not the highest ones. And the actual running results may fluctuate, which is a normal phenomenon.

In the ranking list of November, iPhone 7 continued to top the list. The new comer Xiaomi Note 2 ranked sixth with an average Antutu score of 148352. Although Xiaomi Note 2 was launched in October, it didn’t hit the market until November, so its result was included in the ranking list of November. Xiaomi Max, which was launched at the same time with Xiaomi Note 2 didn’t appear on the list either because the number of its scores reported to the Antutu server didn’t reach the statistical requirement of 2000.

Apart from Xiaomi, this time Huawei’s new flagship model Huawei Mate 9 also made its debut in the list. But we guess many of you might have noticed that the average score of Huawei Mate 9 released by Antutu changed from 132289 to 146942. Why? Because Huawei has freed up the temperature control on its chips during its latest system update, which enables its GPU to work longer with full power and in turn increased its Antutu score in 3D part from 40,000+ to 50,000+.

Considering the fairness of the list, tutu deleted all the score data acquired before the update and recalculated the average score based on the updated data, and finally got the average score of Huawei Mate 9 to be 146942. We can see that Kirin 960 which powers Huawei Mate 9 has strong performance and outperformed Qualcomm Snapdragon 820 and generally equaled Qualcomm Snapdragon 821.

The above chart is the overall performance ranking list of November as measured by the average Antutu score, and includes both Android smartphones and iOS smartphones. In order to help you better understand the performance ranking list, we usually include separate lists based on different operating systems. However, considering that there were no big changes in iOS system in November, this time we only include the Android list. 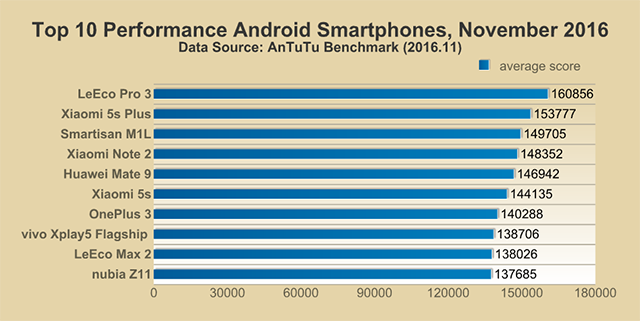 There are no big changes in the ranking list of November compared with that of October. The top three are still LeEco Pro3, Xiaomi 5S Plus and Smartisan M1L. The new comers to the Android list are Xiaomi Note 2 and Huawei Mate 9.

Xiaomi Note 2 ranked fourth with an Antutu score of 148352. This model is powered by Qualcomm Snapdragon 821 with CPU clock speed of up to 2.35GHz, paired with Adreno 530 GPU, and offers two memory combination of 4GB RAM/64GB inbuilt storage and 6GB RAM/128GB inbuilt storage.

Huawei Mate 9 ranked fifth with an Antutu score of 146942. This model is powered by the new generation of Kirin 960 with CPU clock speed of up to 2.4GHz, paired with Mali G71 MP8 GPU which can offer better multi-task experience and graphics thanks to a 180% speed increase over the previous generation Mali-T880.

The newly launched high-performance smartphones in November also include OnePlus 3T and vivo Xplay 6. OnePlus 3T is powered by Qualcomm Snapdragon 821 processor. Because the official version of OnePlus 3T won’t be available in the market until the end of this month, we didn’t include it in the ranking list of November. Vivo Xplay 6 is powered by Snapdragon 820 processor, and may break into the top 10 list considering its strong performance, but it is not available in the market either, and was not included in the list.

PS: Antutu has updated the performance ranking list in Antutu Benchmark app and our official WeChat, in which we has added many new models released in the second half of 2016 for the reference of our users.

The above data reflects the changes of smartphone performance of November 2016. For more information about the ranking list, please subscribe Cony Ann’s WeChat AnTuTu_Benchmark, and check in the menu of “Antutu score query”.