1.Score: the average score of each model (not the highest score).

3.Data amount: At least 2000 data sample for a single model. 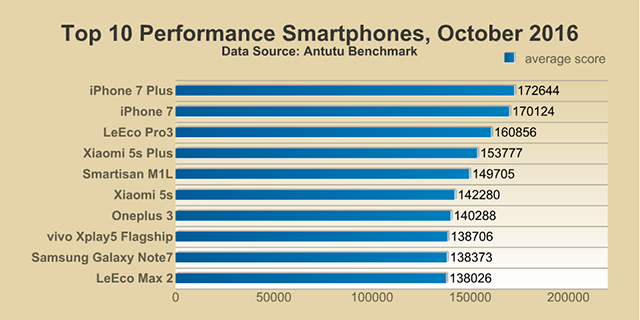 There are some changes in the performance ranking list of October compared with that of September. Smartisan Techology’s new model, Smartisan M1L successfully made its debut in the list, ranking fifth with an Antutu score of 149705. The rankings of Xiaomi 5s, OnePlus 3, vivo Xplay5 Flagship, Samsung Galaxy Note7 and LeEco Max 2 have fallen. The iPhone 7 Plus continues to top the list with the powerful performance of its A10 processor. 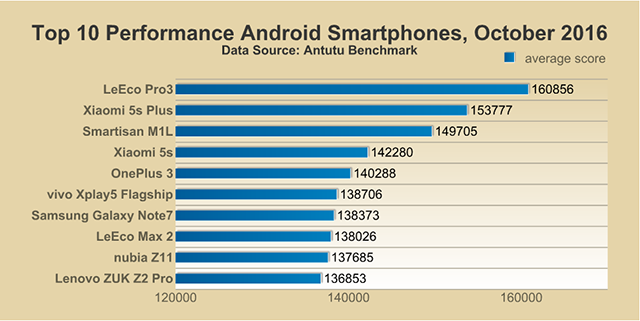 As in September, in the list of Top 10 Performance Android Smartphones, LeEco Pro3 claimed the top position again, followed by Xiaomi 5s Plus and Smartisan M1L.

As a newcomer to the list, Smartisan M1L(high-end version) has the high-end hardware configuration found in the current market. It is powered by the powerful processor Snapdragon 821 with single core main frequency of 2.35GHz, paired with 6GB of RAM and 64GB of ROM. Because the number of  Smartisan M1 scores reported to the Antutu server didn’t reach the statistical requirement of 2000, the Smartisan M1 didn’t appear on the list.

In addition, Xiaomi Note 2 and Xiaomi MIX were released at the end of October but didn’t go on sale in this month, so the Antutu database of the two models didn’t reach the statistical standard, and as a result didn’t appear on the list.

The above data reflects the changes of smartphone performance for October 2016. For more information about the ranking list, please subscribe Cony Ann’s WeChat AnTuTu_Benchmark, and check in the menu of “Antutu score query”