Financially 'careful' people know that when making a purchase decision, one should not only be willing to spend money but also know how to better spend their money. When it comes to buying a smartphone, you should know something about cost performance. Sometimes high price does not necessarily equal to best product. Today, tutu will show you Top 10 Cost-effective Smartphones ranking list, and hope it will be helpful for you.

Let’s have a look at the latest Top 10 Cost-effective Smartphones below. 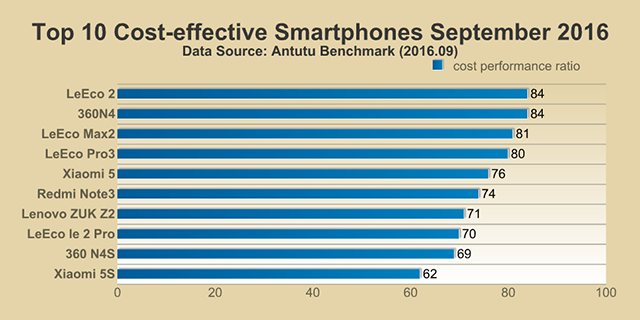 Note: with the fluctuation of market price and average Antutu score, the ranking list also fluctuates

From the above list, we can see that LeEco 2 ranked first , and 360 N4 ranked second. The two models have stable Antutu score and price, so continue to be the top three. LeEco le Max2 ranked third with cost performance ratio of 81. The price of LeEco le Max2 had an obvious price change in September, so the ranking of it also changed.

Among the newly released models in September, LeEco Pro 3 made it to the list ranking fourth. The 32GB version of this model is priced at 1799 yuan, while the 64GB version costs 1999 yuan. The cost performance ratio of the high-end version is about 80 with average Antutu score of 160856. In terms of configuration, this model is powered by Snapdragon 821 processor with the highest clock speed of 2.35GHz, paired with two storage combination versions of 4GB+32GB and 6GB+64GB. Plus the rich movie and television play resources brought by Letv members, this model is really a good value for money for those who love to play mobile games and watch movies and television plays.

Xiaomi 5S, new device of September, ranked tenth with cost performance ratio of about 62,  average Antutu score of 142280 and price at 2299 yuan. This model is powered by Snapdragon 821 processor with the highest clock speed of 2.15GHz, paired with two storage combination versions of 3GB+64GB and 4GB+128GB. Compared with Xiaomi 5,innovation has been made in Xiaomi 5S , for example, the ultrasonic fingerprint technology, unique home button that cannot be pressed and better camera. If you are interested in MIUI, and in the meantime a game junkie, Xiaomi 5S will be a good choice for you.

Besides, there are some other new devices released in September, like iPhone 7, Xiaomi 5S Plus and Samsung Galaxy Note 7, etc. The cost performance ratio of iPhone 7 is about 32, with average Antutu score of 170124, price at 5388 yuan.

Well, The above data reflects the changes of smartphone cost performance ranking of September 2016, for more information about the ranking list, please subscribe Cony Ann’s WeChat AnTuTu_Benchmark, and check in the menu of “Score Query”.