Antutu, according tothe statisticdata at our backstage, released the iOS Device PerformanceRankingList in December 2020, which is almost still in a stable state becauseof no release of new iOS products, except for little change.

It should be notedthat figures in this ranking list were calculated based on the iOS version ofAntutu V8 and collected for a period from December 1 to December 31, 2020. Theresults in the ranking list are average scores instead of the highest scores,and thus more representative. 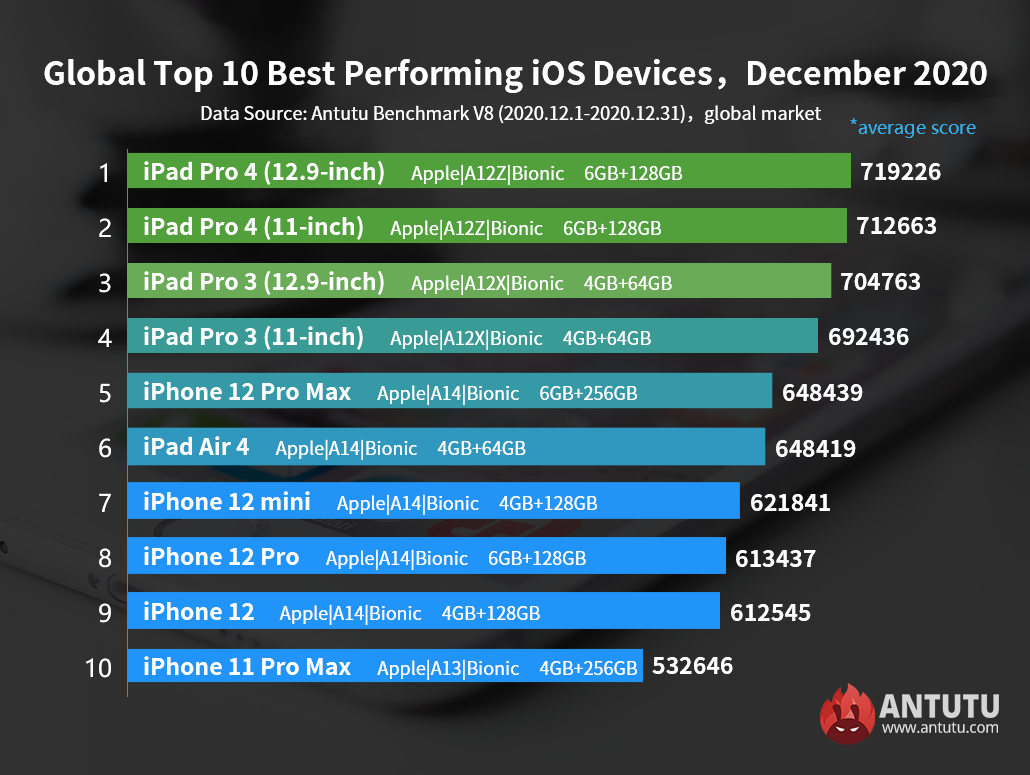 After being pushedback to the second place last month, the ever-victorious winner iPad Pro 4(12.9-inch) regained its place at the top of the List. Its score in this monthis 719,226, slightly higher than the 718,446 of last month. iOS products aremainly experience-oriented, and scores count little, especially on productswith almost the same size and configuration.

iPad Pro 4 (11-inch)ranking No. 3 in both October and November finally took the second place thismonth. In terms of configuration, it and Pro 4 (12.9 inch) ranking No. 1 arecarrying A12Z processors, with broadly similar configuration and their onlydifference embodied in their screen size. In terms of scores, the score of eachitem happens to be slightly lower than that of iPad Pro 4 (12.9-inch) rankingNo. 1, so it is just behind iPad Pro 4 (12.9-inch) this time, but in actualuse, ordinary users can not feel the difference between them and may buy themaccording to their requirements for screen size.

Different from theproducts ranking No. 1 and No. 2, its biggest difference is in the processor.The former two use Apple A12Z processor while iPad Pro 3 (12.9-inch) uses A12X,which are exactly the same chips. The location of each function block on theA12Z and their sizes are exactly the same as that on A12X and A12Z only enablesthe eighth GPU core that A12X has not enabled. In other words, A12Z is Apple’stoothpaste-squeezing product with no significant difference. For iPad Proproducts, there are very few APPs out there that make them feel like a painright now.

Not much else haschanged. The average scores of all four 2020 iPhone models have exceeded600,000 this time. The only device on the Ranking List with its score beginningwith the number of 5 is the flagship iPhone 11 Pro Max from the year before,which reserves the last glory for veteran models.

As predicted in ourRanking List in November, it’s no surprise that the same 10 devices made theList in December, and that’s likely to continue until Apple releases newproducts in March 2021. Just wait.