In September, Apple held its new product launch event and officially released the new generation of iPhones including iPhone 11, iPhone 11 Pro and iPhone 11 Pro Max, all of which are powered by the new A13 Bionic chipset and provide significant performance upgrade compared to their predecessors, the iPhone XS/XR series.

Today Antutu reveals our benchmark results for the TOP 10 best performing iOS devices for September. Unsurprisingly, all the three new iPhones entered the Top 10 iOS list, but they didn’t win the first place. Who has won the first place in September? Check out our most updated Top 10 iOS list as measure by the average Antutu score below.

The data are collected between September 1, 2019 to September 30, 2019. The list consists of iOS devices that have at least 1,000 units running Antutu benchmark V7, and the scores are averaged across all devices, making the results more representative. Additionally, the list includes both iPhone and iPad products. 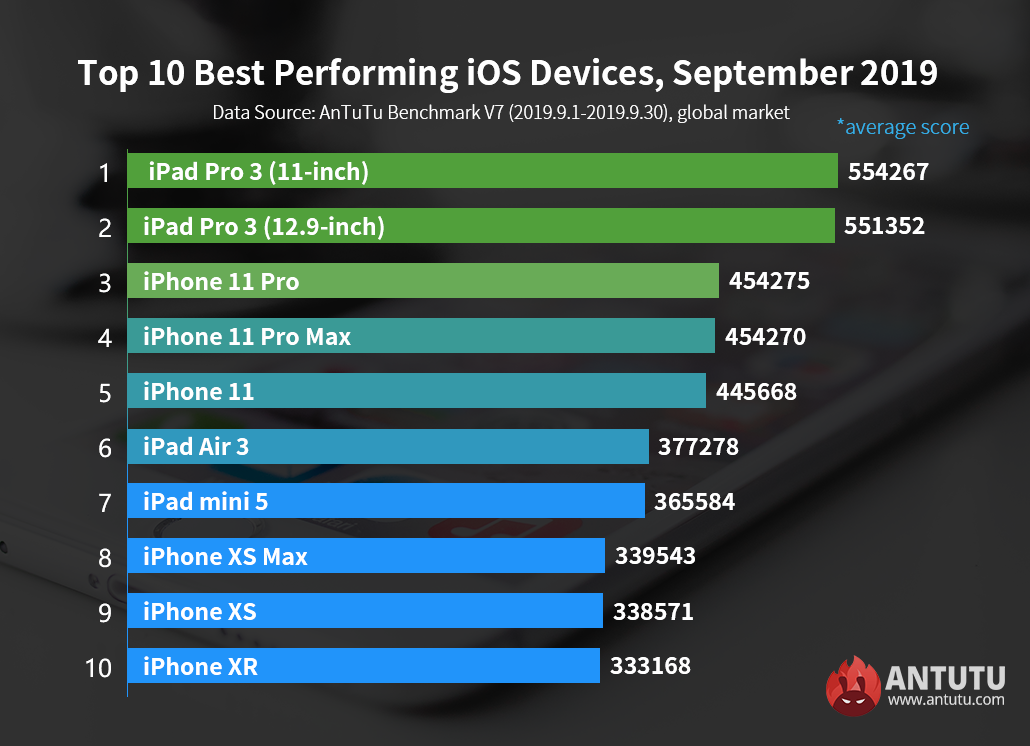 According to our most updated iOS list, the 11-inch iPad Pro 3 and the 12.9-inch iPad Pro 3 (iPad Pro3 used to be known as iPad Pro 2018. We changed the name in order to better manage the data in Antutu backstage) continue to occupy the top two positions with an average Antutu score of 554,267 points and 551,352 points respectively. Both iPads are powered by the A12X Bionic chipset, thanks to which the iPad Pro 3 series are Apple’s most powerful devices up to now.

Why the A12X Bionic is not used in the iPhones? This is because iPad Pro 3 can provide sufficient interior space and big battery for the A12X Bionic chipset, which iPhone, as a compact and easy-to-carry smartphone, cannot provide.

As for the older iOS devices powered by the A10X and the A10 chipset, it will be hard to see them in the Top 10 iOS list in the future.

Above is the global Top 10 best performing iOS devices list for the month of September. For more information about the ranking list, please visit Antutu official website or download AnTuTu Benchmark and check in the menu of “Ranking”.