The first half of 2019 has seen quite a few releases in the global smartphone market, as all the major handset makers released their flagships. All these models come with eye-catching hardware configuration and strong performance. If you are wondering which of these models is the best performer right now, check out our most updated list of Top 10 best performing Android Phones for June 2019. 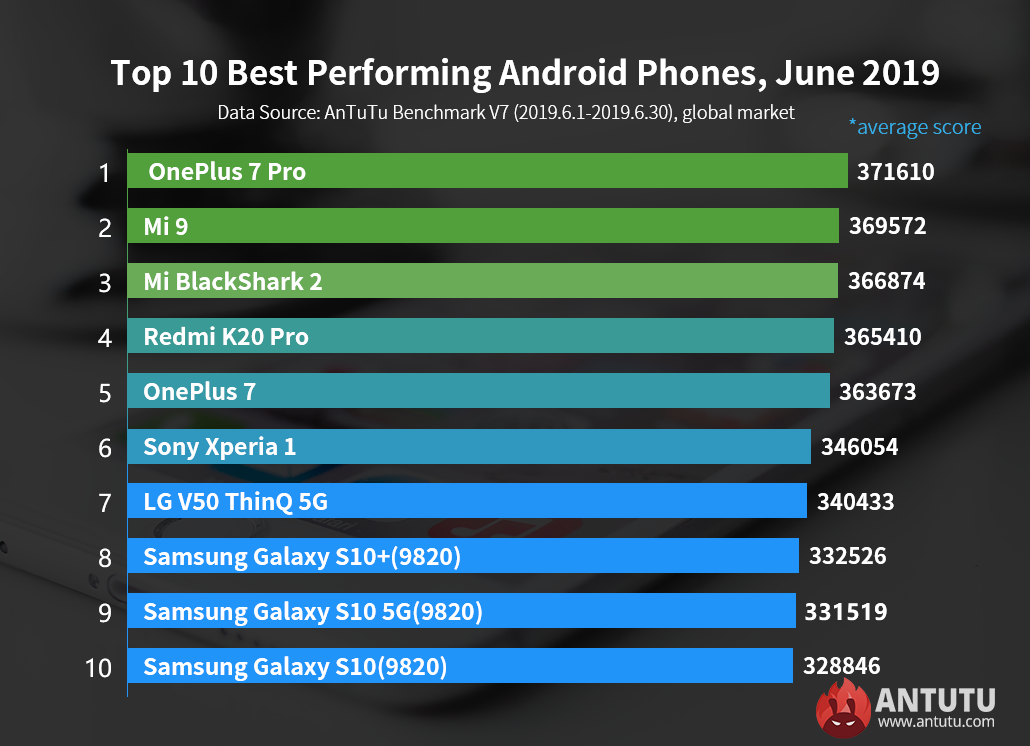 In June, OnePlus 7 Pro continue to top the list for the second consecutive month with an average Antutu score of 371,610. Powered by Snapdragon 855 SoC, OnePlus 7 Pro is the first smartphone in the market to ship with UFS 3.0 memory which allows it to process large files faster than any other flagship phones. Apart from high performance, OnePlus 7 Pro also features a 90Hz display supporting HDR10/10+ with a screen resolution of 3120x1440 and 800 nits of brightness.

Coming in second is Mi 9 which achieves an average Antutu score of 369,572. This model is also powered by Snapdragon 855 SoC with an aggressive CPU scheduling that enables the running of eight CPU cores at full load for longer amount of time, allowing it to deliver stronger CPU performance than other flagship phones although at the cost of more power consumption and weaker battery life. In order to boost its battery life, Mi 9 is also equipped with a 27W wall charger and a 20W wireless charger.

The third place goes to Mi BlackShark 2 with an average Antutu score of 366,874. Being a gaming phone, Mi BlackShark 2 is also powered by Snapdragon 855 and has flagship performance. It has a new liquid cooling system and a built-in large capacity cooling component that ensures excellent heat dissipation capability.

Above is the global Top 10 best performing Android phones list for the month of June. For more information about the ranking list, please visit Antutu official website or download AnTuTu Benchmark and check in the menu of “Ranking”.