In this month, the competition for the second half of the year has started in global phone market. Phone manufacturers have launched their flagship phones in succession, including Snapdragon 865 Plus. Unlike Snapdragon 855 Plus launched last year, this most powerful chip can be only acquired by a few manufacturers and seems to be exclusively provided for super big leading factories.

Today, according to our backstage statistics, Antutu published the global Android phone performance ranking list for August 2020. Let's see what top 10 phones in the ranking are.

This time, the data was collected for a period from August 1, 2020 to August 31, 2020; the results in the ranking list are average scores instead of the highest scores; and there are more than 1,000 pieces of information on single phone model. The data was calculated based on Antutu V8. If any single phone model has several memory capacity versions, then its version of highest memory capacity shall prevail.

In the list of best performing flagship phones in August, ROG Phone 3, a new gaming phone of Asus, ranks No. 1 with a overall score of 615,289. This new Asus ROG Phone 3 looks just slightly different from the last generation, though it's still designed in the shape of "Eye of the Lost Home". It is the second phone to ship with Snapdragon 865 Plus processor in the world. Its predecessor ROG Phone 2 was the first phone to ship with Snapdragon 855 Plus processor last year. This fully demonstrates that Asus has rich experience in integrating high-performance hardware for years, so it deserves No. 1 in the ranking.

It's uncertain whether this phone will remain on No. 1 spot in the following months just like its predecessor ROG Phone 2, the Asus’ last-generation gaming phone that has ranked No. 1 for a few consecutive months since its launch. Let's wait and see.

OnePlus 8 Pro ranks No. 2 in the list, the same as that in July. Its overall score is 610,567, a few thousands of points lower than ROG Phone 3 which is the most powerful gaming phone ranking No. 1. But it also performs very well.

Find X2 Pro 12+512GB, a flagship product of OPPO, ranks No. 3 in that list with a overall score of 601,910 in August. However, it ranked No. 1 in terms of performance in the past two months. In previous ranking lists, it was the only one product with a score above 600,000. But this time, Asus ROG Phone 3 and OnePlus 8 Pro both have higher scores than it. However, this result is quite great for this phone launched six months ago, especially in the changing Android phone market.

Among the top 10 best performing phones, only Asus ROG Phone 3 and Samsung Galaxy Note20 Ultra 5G (865+) have the Snapdragon 865 Plus processor, which is the most powerful processor for Android phones at the moment. Nevertheless, Samsung Galaxy Note20 Ultra 5G (865+) stands at the fourth place in the ranking list. It can be seen that processor is crucial, but many other factors also influence the final result. 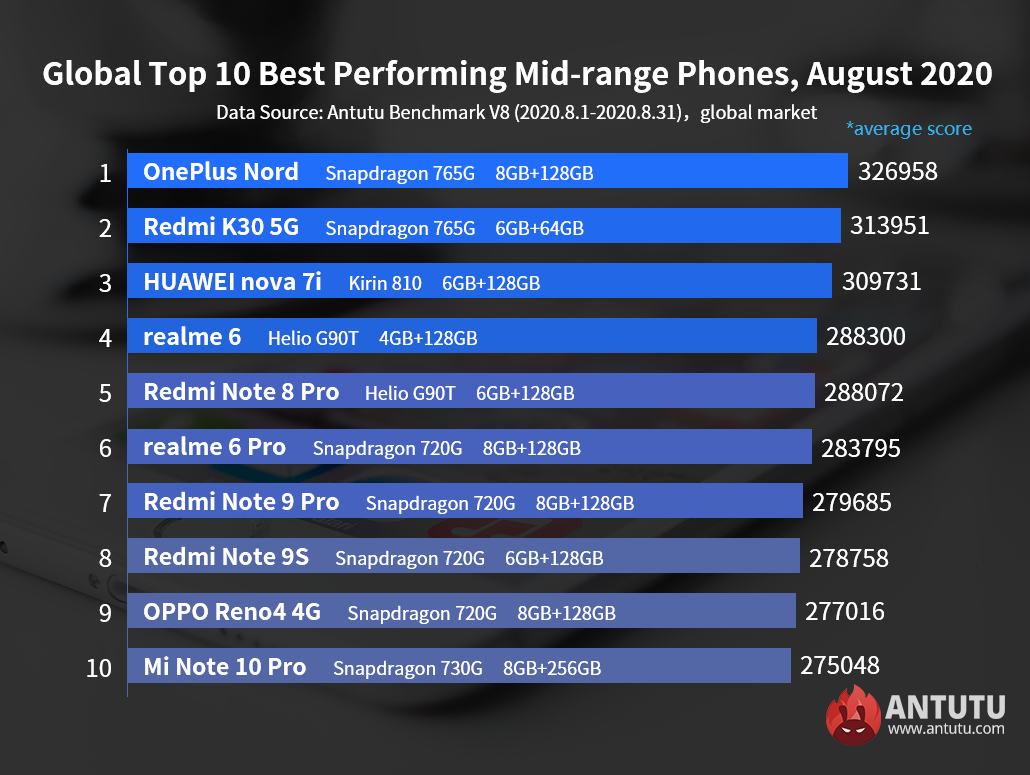 Those are global Android phone performance rankings in August. In the flagship phone ranking, obviously, Asus ROG Phone 3 stands at the first place, as Snapdragon 865 Plus started to show its advantages; and Samsung top-level Note 20 Series phone successfully stands at the fourth place. Although they're both Snapdragon 865 Plus phones, Asus's phone is much cheaper than Samsung's phone. In the mid-range phone ranking, half of the products are owned by MI, meaning that MI has a large market share presently.