The first quarter of 2020 has passed. Due to the outbreak of coronavirus, the mobile phone market has witnessed quite a lot of problems. However, it is inevitable that 5G mobile phones have gradually entered the international stage. More and more emerging 5G mobile phones have appeared and made it into the Top 10 in terms of performance.

Based on the product data gained from the backstage, Antutu has released the Global Top 10 Best Performing Android Phones in March. Let’s have a look and see which phone ranks the first in March.

Just as always, there will be two lists, one for flagship phones, the other for mid-range phones. The ranking is mostly determined by the SoC.

The data collection period was from March 1 to March 31. The scores shown here are all average scores, not the highest ones, which are more representative. And the number of products for data collection concerning single mobile phone is larger than 1,000. The data are calculated based on Antutu Benchmark V8.

As the typically good-looking S-series phone of Samsung in the first half of 2020, Galaxy S20 Ultra 5G is powered by Snapdragon 865 SoC, and offers 12GB of RAM and 256GB of storage, plus the outstanding 100 megapixels and 100 times zooming when taking photos, all of which are possibly making this phone the strongest and most powerful Android phone throughout the year. But one noteworthy thing that buyers who care about smart phone appearance should be aware of is its super-large camera modules and the big screen size.

It can be seen from the suffixes that S20 phones with Snapdragon 865 SoC generally have higher benchmark scores than those with Samsung’s own Exynos 990 5G SoC. It is mainly due to the configuration of different versions of Samsung Galaxy S20 series. Besides, different combinations of ROM and flash memory will also have impact on the overall score. However, they all go far beyond current demands in terms of performance.

The fifth is our “old friend”, which we’re very familiar with in the past half year: ASUS ROG Phone2 12+512G version. With an average benchmark score of 510080, it has been overshadowed by the flagship SoC of 5G era: Snapdragon 865 and Exynos 990.

It can be seen that the Samsung Galaxy S20 phones ranking the 6th and 7th use 5G Exynos 990 SoC, but they are slightly weaker than ASUS ROG Phone2 in terms of storage. Therefore, ASUS has made it the 5th rank with several thousand scores higher. Or, all the top 6 would have been from Samsung Galaxy S20 series.

OnePlus 7, ranking the 10th, still uses Snapdragon 855 SoC. If there are no more surprises, this should be the last time that Snapdragon 855 SoC appeared in the Top 10 Best Performing Android Phones. The 4G era has, after all, passed. 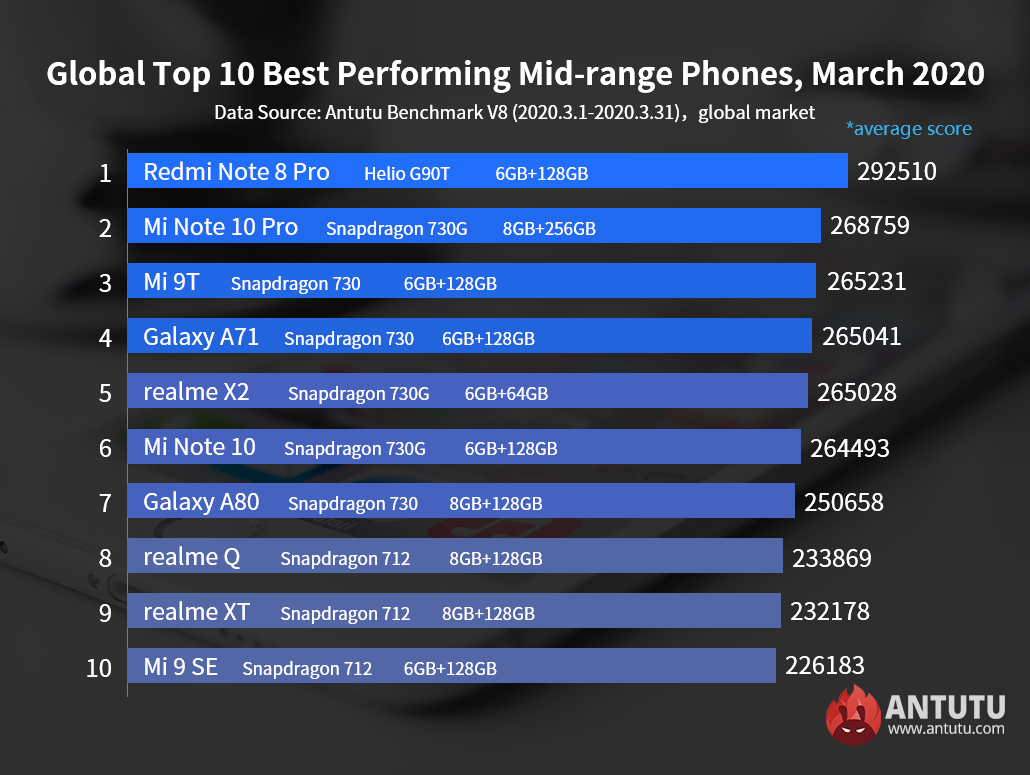 Different from the great changes in flagship phones, for mid-range phones, there lacks product release with 5G SoC in the market, leading to the result that the rankings remain almost the same as those of the last month. It seems that the market of mid-range 5G mobile phones has great potential to be explored.

In March, the one that ranks the first among mid-range phones is still Redmi Note 8 Pro 6GB+128GB, with the overall benchmark score of 292510. MediaTek has brought brand-new Helio G series phones for some overseas types. Apart from G90T adopted by Redmi Note 8 Pro, the SoC of the Helio G series is expected to expand gradually. But when it comes to performance, G90T is still the most powerful one among the G series of MediaTek.

In summary, the changes in Top 10 Best Performing Android Flagship Phones in March is comforting. After so long time, we finally get to see new 5G phones take up most of the quota within a short period of time. As for mid-range phones, there hasn’t been so much news. Anyway, after 5G flagship phones become popular, it would be the time for the mid-range 5G phones to experience some changes. So, let’s be patient and see what will happen in the future.