The year 2020 has arrived, and with it the beginning of a new decade of the 21st century. The years go by so fast. Mobile phones have gone through earth-shaking changes in the past two decades. What will mobile phones look like in the next decade? How mobile phones will change our lives in the future? We are looking forward to the answers.

Today Antutu reveals our list of the Top 10 best performing iOS devices of December based on data collected from Antutu database between December 1, 2019 to December 31, 2019. The list consists of iOS devices that have at least 1,000 units running Antutu V8 and the scores are averaged across all devices rather than the highest recorded scores of each model, making the results more representative. Additionally, the list includes both iPhone and iPad products.

It should be noted that the data of this month’s list is derived from Antutu V8, in which we have included the new test scene Terracotta Warriors and updated the test algorithms. Therefore, the scores in the list are not comparable to V7 scores. 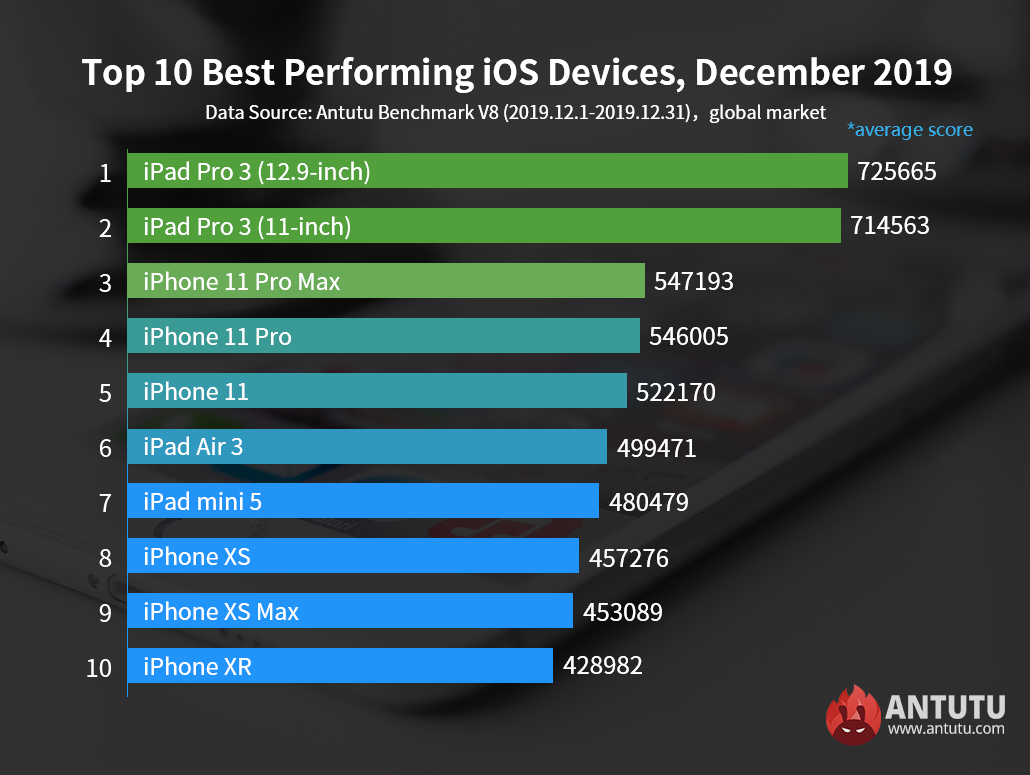 In December, the first two spots on the iOS list are still occupied by iPad Pro 3 (12.9-inch) and iPad Pro 3 (11-inch), which achieve an average Antutu score of 725,665 and 714,563 points respectively. Both the two 2018 iPads are powered by Apple’s most powerful chip, A12X Bionic, and will be likely to steadily remain on the top two spots until Apple releases new iPad products.

Above is the list of global Top 10 best performing iOS devices for the month of December. Those who are familiar with the iOS list may have noticed that the ranking of this month is the same with that of last month with minor differences in scores. Although it’s already 2020 now, the list is expected to remain stable in the coming months before Apple releases the rumored iPhone SE2 in March.