Today Antutu released the preferences of Chinese mobile phone users in Q3 of 2019 based on data collected from Antutu database.

It should be noted that this preferences list is prepared based on the phone configuration of the users of Antutu and thus it does not represent the preferences of the overall Android market. 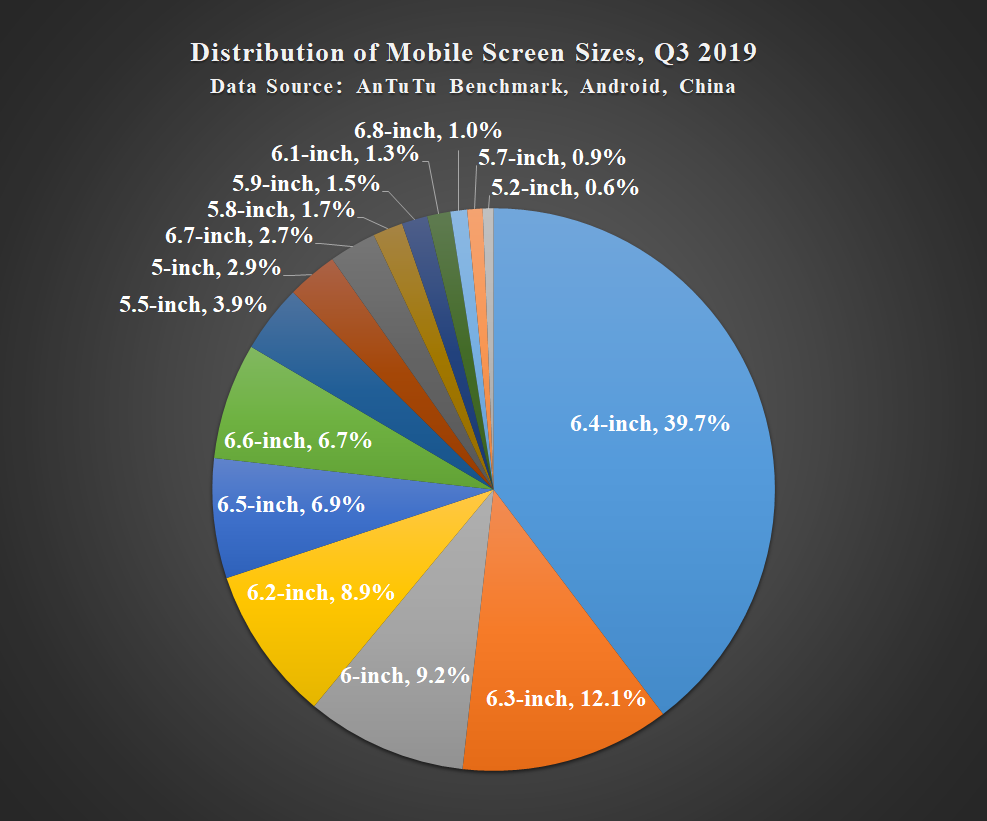 Although many users have expressed their desires for a small-screen flagship product on social media, small screens below 5 inches are almost on the verge of extinction while screens of 6 inches or more are now the mainstream, according to Antutu's statistics.

With the development of the full screen, the ever-increasing screen aspect ratio allows the device to increase significantly in size without changing the width. Therefore, 6.4-inch screen accounts for 39.7%, according to Antutu's statistics. Adding the additional 6.3-inch screen (12.1%) and 6-inch screen (9.2%), screens of 6 inches or more are dominating the market, with a total percentage of more than 50%.

Antutu's Take: with today's technology, such dimension has reached the limit of one-handed operation. Besides, manufacturers also prefer screens of 6 to 6.4 inches. So, the result is within our expectation.

However, considering that the 5G features have a high demand for batteries, the easiest way for phone makers to increase the battery capacity at current stage is to increase the device dimension and use a larger screen. In this way, Antutu believes that the phone screen will continue to increase in the near future and more products with a bendable screen or “surround screen” will emerge. 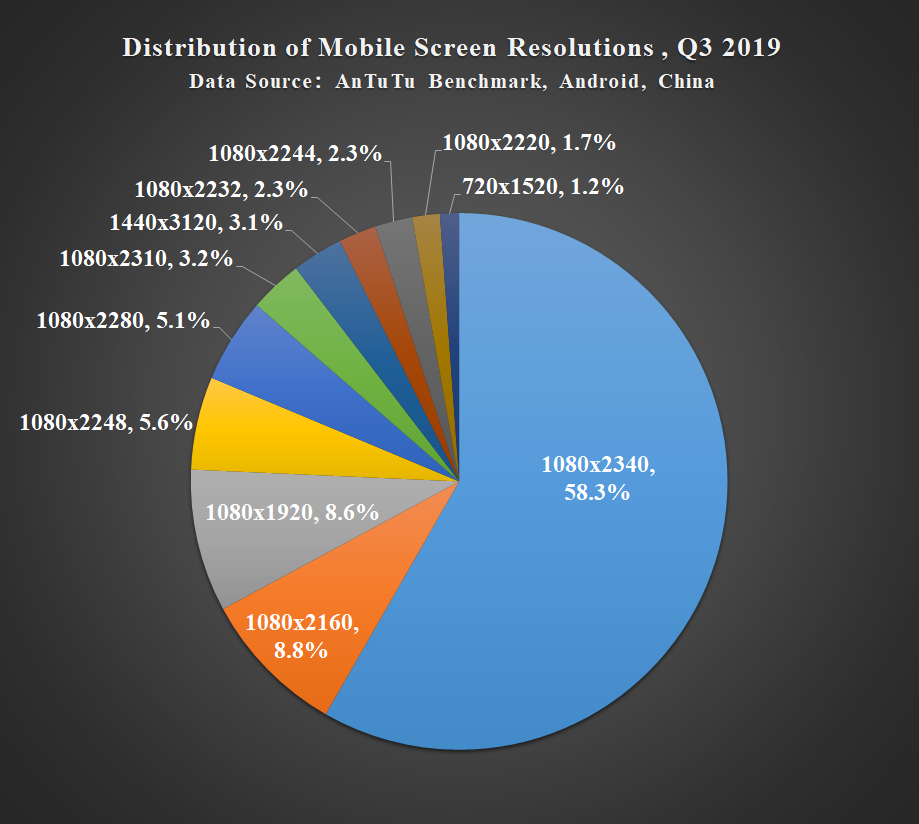 Is 2K display good? Users who have experienced it would definitely say yes. However, few manufacturers will choose this kind of screen.

Currently, in terms of resolution, 1080P is still dominating, with 2340x1080 resolution alone accounting for 58.3% , according to Antutu's statistics.

The only 2K-level resolution making its way on our list is 3120x1440 which is primarily adopted by HUAWEI Mate 20 Pro and OnePlus 7 Pro, accounting for about 3.1%.

In addition, there are 1.2% of 720P resolution on this list, which is 1520x720. This kind of screen resolution is popular among the low-end products. And this group of users are typically less passionate about benchmark and tuning, which explains its low percentage.

Antutu's Take: we definitely support the higher-resolution display, since it has more delicate image quality under the same screen size. However, compared to 1080P display, power consumption of higher-resolution display is also much higher. In the context of current battery capacity, it is reasonable that manufacturers usually give up on 2K display. But, Antutu really hopes that more manufacturers will adopt 2K or higher resolution displays on their flagship models in future, like what Samsung, HUAWEI and OnePlus have already done, and the introduction of 90Hz would be even better. 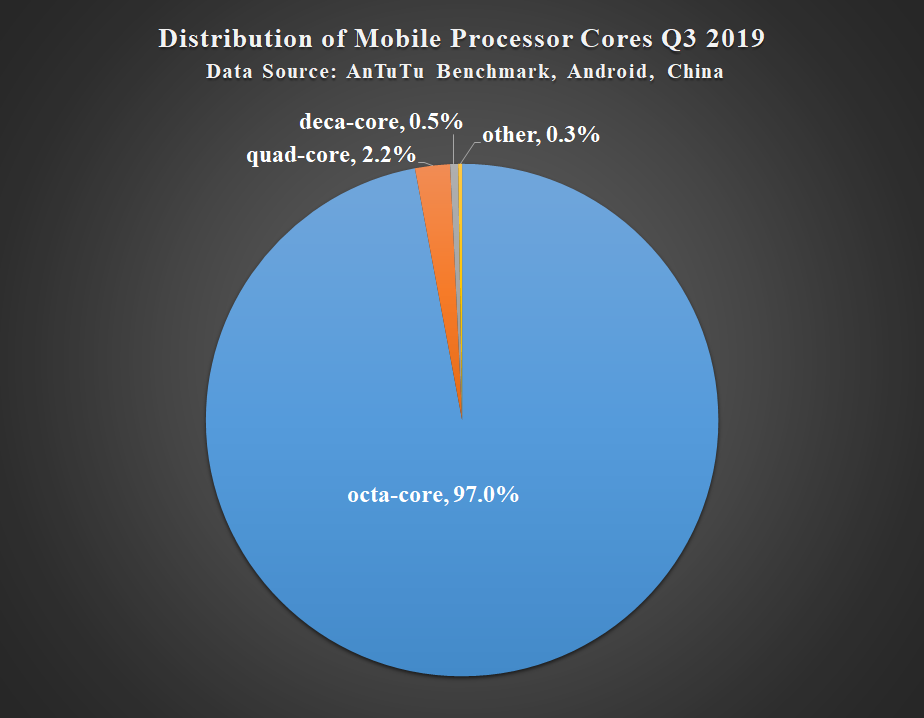 If there were any low-end or mid-range entry models with quad-core CPU a year ago, now the octa-core CPU is definitely the standard for Android smart phones domestically. You can hardly find a new Android phone equipped with non-octa-core CPU.

On the both ends of the spectrum are the deca-core and quad-core CPUs, which are basically found on old models that have not been updated yet, such as devices with MediaTek's Helio X20 or Qualcomm's Snapdragon 800. Such devices can still perform well, only if there were no high demand. 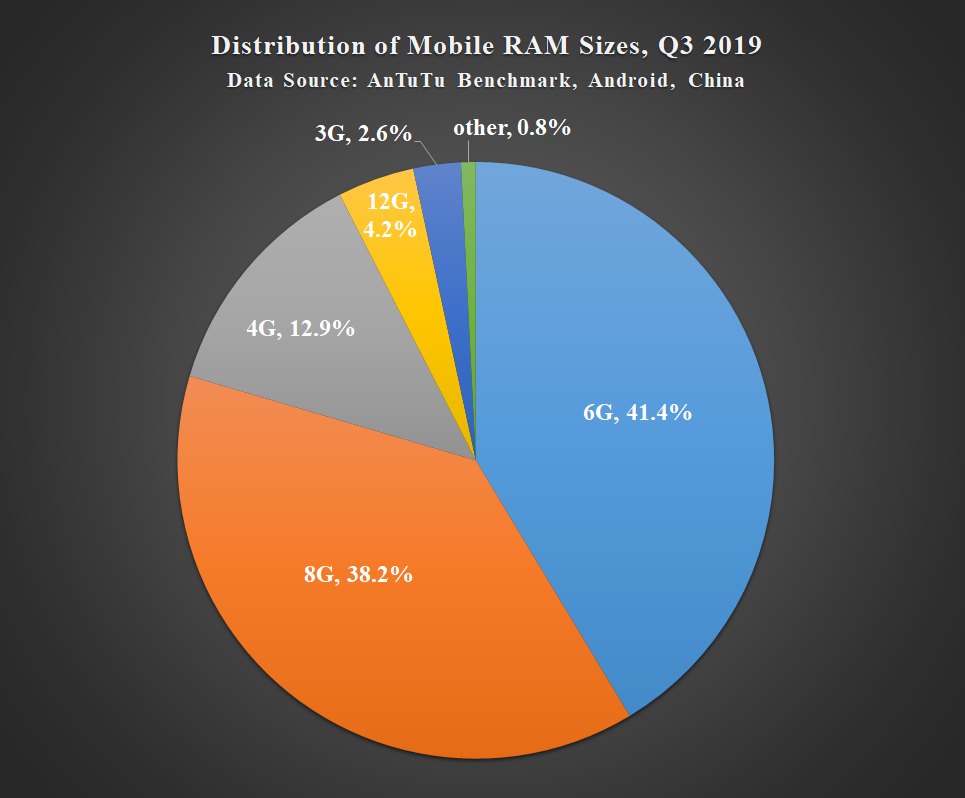 According to this RAM list, phones with 6GB or 8GB RAM are making the majority, which shows that mid-range and high-end models are more popular among Antutu's users. Otherwise, the proportion would have been lower.

On the other hand, although users welcome the top-of-the-line products with 12GB RAM, people opt for 6GB or 8GB RAM when making the order. After all, for most users, 6GB is enough for daily use while 8GB makes perfection more perfect. Though 12GB RAM has a better 'testing score', it's practically less useful.

For today's mobile market, low-end entry-level products are basically equipped with 3/4GB RAM, while mid-range and high-end products are equipped with 6GB RAM, and some flagship products even start from 8GB RAM. Of course, it is good news to users, especially to users of low-end or mid-range products who have been long suffered from the lack of memory.

ROM: Is 128GB a Standard Configuration? 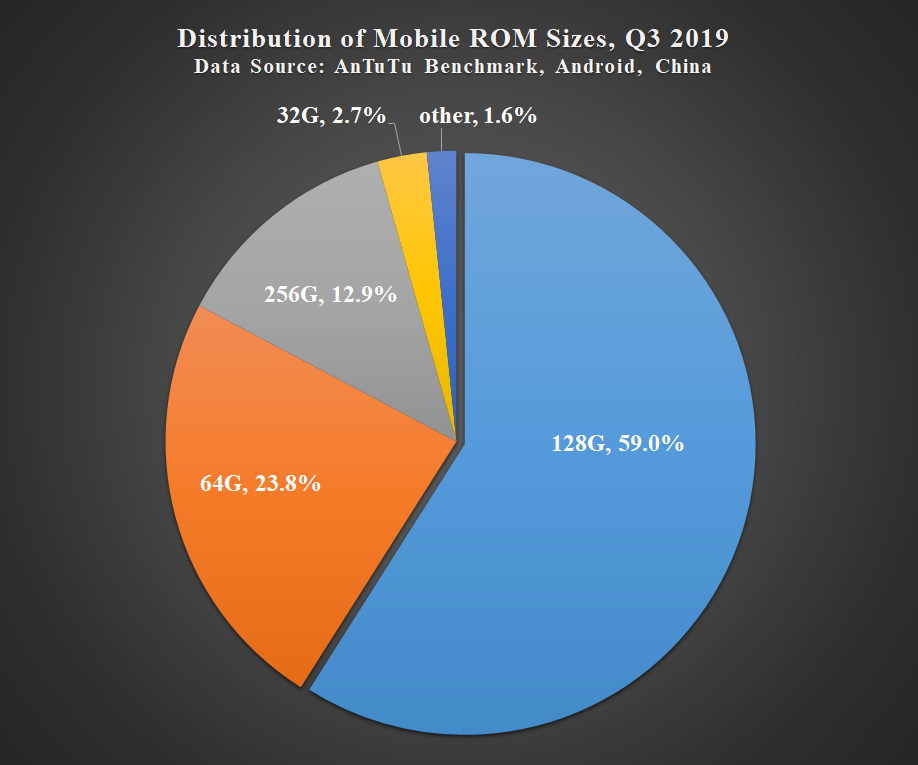 Among the users of Antutu, devices with 128GB ROM are dominating, with a percentage of 59%. This has to be credited to the high adoption of 128GB ROM by mobile phone manufacturers in recent two years, as the 128GB ROM is the minimum for most flagship devices and even becomes a standard for some mid-range models.

As the phone resolution continues to increase, the size of a single picture is increasing as well, from hundreds KB in early days to several or even dozens MB nowadays. Additionally, more apps also mean higher demand for phone storage.

Based on current situation, 32GB ROM is not enough for most users, even 64GB is barely enough. Only 128GB or larger ROM can meet users' demand.

On the other hand, due to the features of flash memory, the read/write speed is dramatically affected when the storage capacity is nearly exhausted, which further affects the system performance. Therefore, Antutu also recommends our users to choose larger storage, especially for those who are less likely to replace their devices every year. 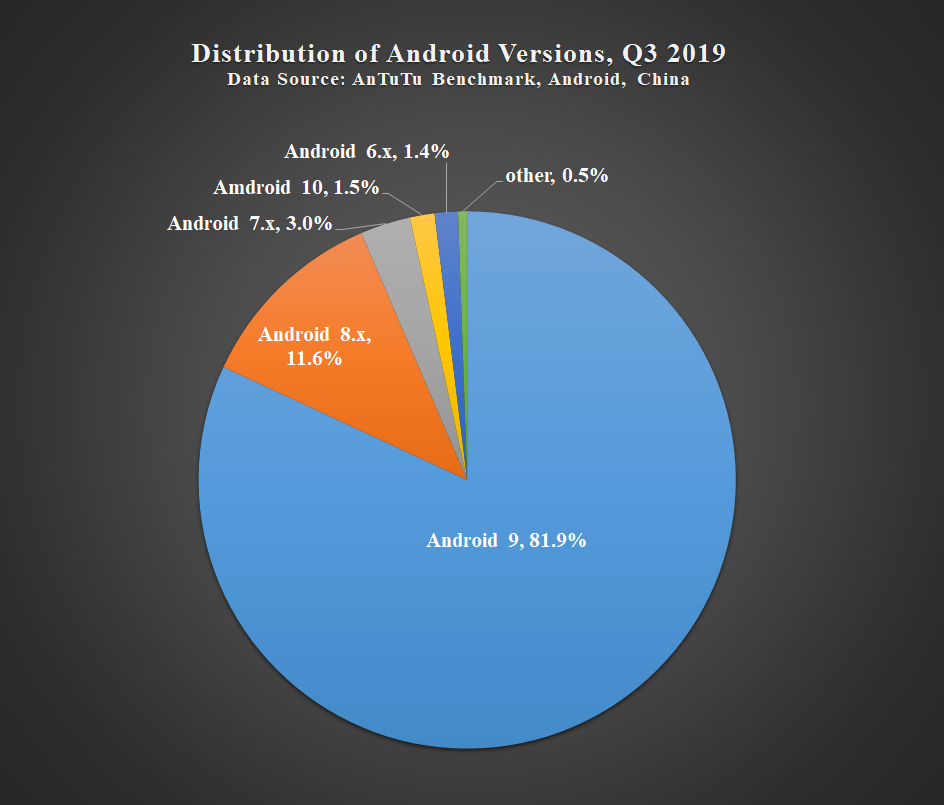 According to Google's official data, Android 9 doesn't represent as much proportion as it does among Antutu's users which has reached 81.9%. One main factor behind this is that most new models shipped by manufacturers in the past year are equipped with Android 9 and many old models have been updated to Android 9.

Next to Android 9 is Android 8.1. It is undeniable that there are already some manufacturers adopting the "one-shot deal" approach on operating systems. It means that once the new model is launched, it will fix the bugs or introduce new features only through system upgrade, which also means it is impossible to upgrade the Android version.

The latest OS version doesn't always guarantee the best performance, but manufacturers still have the responsibility to upgrade the system, especially the Android OS version. This is the hidden demand beyond configuration and price. Antutu hopes that in future, all devices developed by domestic phone makers will be able to enjoy 1-2 years of system updates, especially at least one major update for Android OS version.

Although Android 9 accounts for a much higher proportion among Antutu's users, the fragmentation problem is still prominent. Each version, ranging from Android 6 to Android 8, occupies about 1% share respectively, which also present challenges to the development of Antutu that you have to make sure the latest app is compatible with old Android versions.