The third quarter of 2016 has passed, so now it is time to review what went on in the global smartphone market last quarter with Antutu. There were many smartphone launch events with the release of many new models in Q3, including annual blockbusters like the iPhone 7 and the Samsung Galaxy Note7(later recalled), once again proving the fierce competition in the smartphone market.

What kind of smartphones were people using around the world in Q3? Let’s have a look at the TOP 10 Popular Smartphones of Q3 2016.

PS: All the data were submitted by Antutu users and analyzed by Antutu Lab. From the data, we can see which smartphones users are testing in   different countries, and in turn get an idea of which smartphones are popular in these countries. Besides, we can also get a general idea of the development situation of mobile industry in different countries. Note: of the Samsung Galaxy Note 7 being recalled, the results reported here are somewhat distorted because Note 7 devices counted but later returned and other devices purchased as replacements. 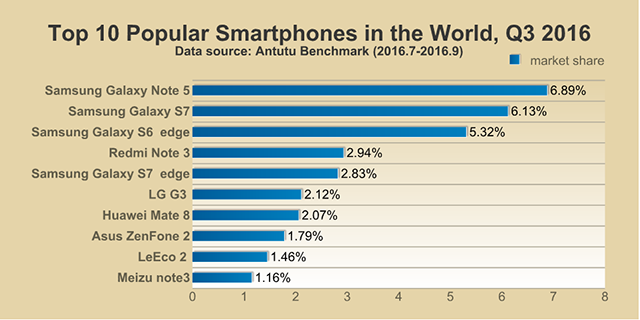 From the above list of Top 10 Popular Smartphones in the World, we can see that Samsung’s market share is very high, taking 4 of the top 5 spots. In particular, the old model of Galaxy Note 5 still has higher market share than the new S7 Edge. Obviously, after the battery and recall problems of the Samsung Galaxy Note7, Note 5 has become a better alternative for many big screen business smartphone users. Meanwhile, the market shares of Redmi Note3, Huawei Mate8, LeEco 2 and Meizu note 3 have all surpassed 1%. Chinese handset makers are fast increasing their presence in the global market. 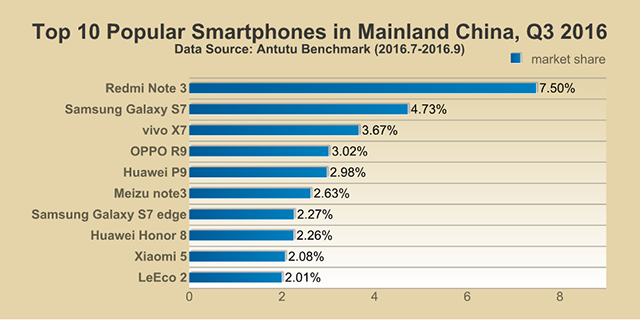 From the statistical data, we speculate when it comes to choosing a smartphone, mainland Chinese users tend to attach great importance to brand while also paying attention to cost performance of the phone. Huawei and Samsung have strong brand advantages while vivo and OPPO have wide offline channels based on their celebrity endorsements. Xiaomi, LeEco and Meizu attract customers by more product diversity and excellent cost performance.

In Taiwan, the advantage of local brands like Asus and HTC is obvious. Meanwhile, Sony and Samsung smartphones are also favored by Taiwan users. The market share of Chinese smartphone OPPO R9 Plus has reached 1.80% which we guess maybe closely related with OPPO’s sponsorship for entertainment programs of Taiwan. Good products combined with effective market promotion will certainly lead to successful market penetration. 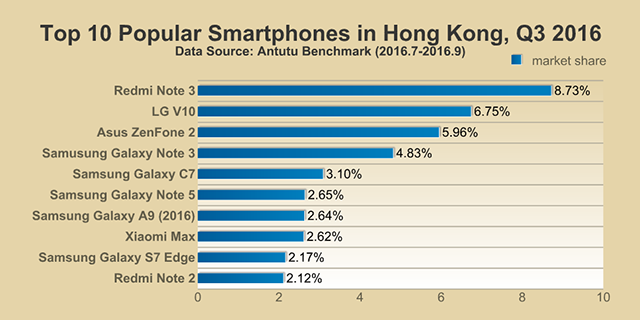 From the list of Top 10 Popular Smartphones of Hong Kong, we can see that Samsung models accounted for half of the positions on the list, and included the four major series of Note, S, C and A, including the latest flagship models like Samsung Galaxy S7 Edge. Apart from Samsung devices, LG V10, Asus ZenFone 2 and Redmi Note 3 also appeal to Hong Kong consumers.

From the list of Top 10 Popular Smartphones in Korea, we can see that as a local brand of Korea, Samsung devices are very popular with Korean users. Meanwhile the other local brand LG, is also favored by Korean users. 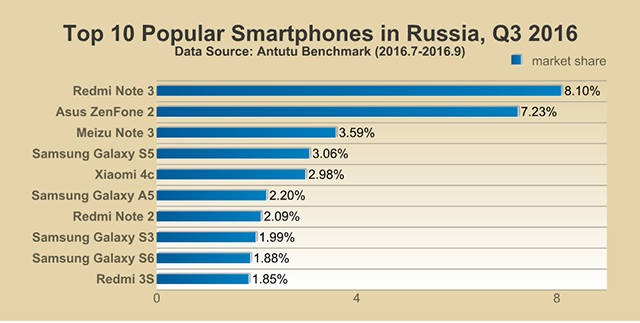 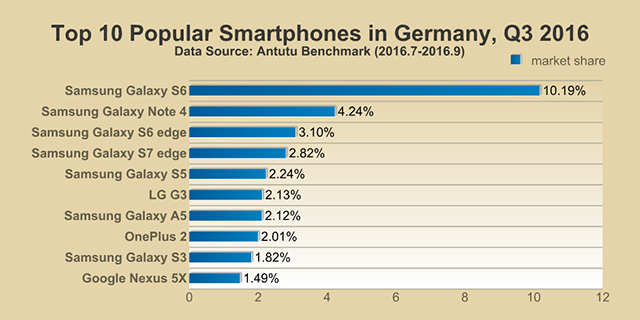 From the list of Top 10 Popular Smartphones in Germany, Samsung devices are very popular with German users Even many old flagship models like Samsung Galaxy Note 4 and Samsung Galaxy S5, have high market shares in Germany. Besides, LG G3, OnePlus 2 and Google Nexus 5X also have excellent performance in German market. 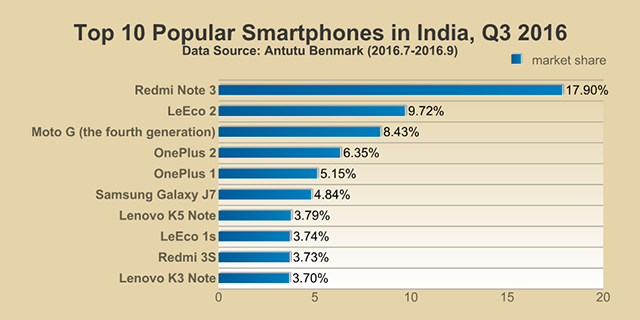 Chinese handset makers usually tend to choose India as the first stop for overseas expansion. In the internal email Lei Jun sent to his staff on October 19 he claimed that Xiaomi had set an incredible record in India by selling more than 1 million smartphones within eighteen days . Form the list of Top 10 Popular Smartphones in India of Q3 , we can also see that the Chinese smartphones like Redmi Note 3, LeEco 2, OnePlus and Lenovo K5 Note also had outstanding performance, plus Moto G(the fourth generation), Chinese smartphones accounted for nine positions of the list in total. India market has already become the second battlefield for Chinese handset makers.

Although the top positions in Indian market are all occupied by foreign handset makers, India also has strong local brands, among which the new brand YU released by Indian handset maker Micromax is also very popular with Indian users. However, we don’t have enough data of the relevant models, which is probably because Indian users are not keen on running test for performance.

As for Vietnam market, Chinese devices and Samsung devices dominated the list. Meanwhile, we can also see that Vietnam users not only like highly cost-effective smartphones like Redmi Note 3, but also enjoy high-end smartphones like Galaxy Note 5, S6 and HTC One M8.

Like in Vietnam, the most popular smartphones in Malaysia were also Chinese smartphones and Samsung smartphones. In terms of product level, the list covered the complete breadth of high-end, middle-end and low-end smartphones. Besides, big screen smartphones like Samsung Galaxy Note 3, Note 4, Note 5 and Xiaomi Max are very popular, of which the market shares all surpassed 2%. Local brands of Malaysia didn’t appear on the list.

From the above lists we can see that Chinese smartphones not only had excellent performance in the mainland Chinese market but also had certain market shares around the world like Taiwan, Hong Kong, America, Russia, Germany and India, with one or more hot models in each local market. The road for overseas expansion of Chinese smartphones is becoming wider and wider.