The past September gave mobile phone enthusiasts many surprises, there was not only the release of iPhone 7, but also the release of new models like LeEco and Xiaomi powered by new Snapdragon 821, which have brought new upsurge with their excellent performance. Now, we’ll show you the performance ranking list of September, of which high score ranking has been totally rewritten. Are you eager to see the final ranking result?

1.Score: the average score of each model (not the highest score)

3.Data amount: At least 2000 data sample for a single model

From the average scores of Antutu backstage, the top 10 performance models are listed below.

Great changes have taken place in the ranking list of September, the top five are replaced by the following models in order: iPhone 7 Plus, iPhone 7, LeEco Pro 3,  Xiaomi 5s Plus and Xiaomi 5s. No.8 is Samsung Galaxy Note 7, although this model was released at the end of August, not until September did Antutu collected enough score data, therefore it appeared on the list of September.

First, let’s have a look at the Top 10 performance iOS devices ranking list.

From the list, we can see that the Antutu score of iPhone 7 and iPhone 7 Plus both reached over 170000. The two new models are both powered by A10 chip, of which the CPU frequency was lifted up to 2.4GHz , number of cores changed to four, and great progress has been made in GPU performance compared with the previous generation of A9 processor, so the two models obtained high scores. Finally, combined with the closed iOS system, the two new models of iPhone will likely to have excellent game experience.

Next, let’s have a look at top 10 performance Android devices of September. 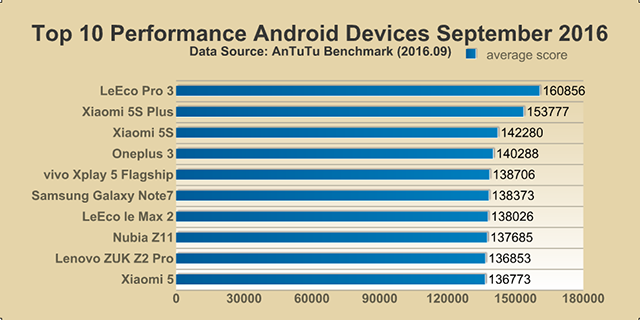 LeEco Pro 3 claimed the top position with average Antutu score of 160856. LeEco Pro 3 (6GB version) is powered by Snapdragon 821 processor with the highest clock speed of 2.35GHz, paired with Adreno 530 graphics processor and 6GB of RAM. Progress has also been made in its GPU frequency compared with Qualcomm 820 processor.

It’s important to note that although Xiaomi 5S applies Qualcomm Snapdragon 821 processor, the highest clock speed of it is 2.15GHz, which is the same with Qualcomm 820 adopted by Xiaomi 5. Nevertheless, progress has been made in the small ghz core feenquency of Qualcomm 821 compared with Snapdragon 820, therefore, the real score of Xiaomi 5S is higher than Xiaomi 5 by a small margin.

In addition, top newcomer to the expanded list also included Samsung Galaxy Note7 (standard version). This model is powered by Snapdragon 820 processor with the highest clock speed of 2.15GHz and 4GB of RAM. Although this model has mainstream configuration, it hasn’t reached the top level. Therefore, it ranked sixth with a middle level Antutu score of 138373.

PS: There is also a new model powered by Qualcomm Snapdragon 821-Asus ZenFone3 Deluxe, but this model has no officially imported version at the moment, so it cannot be listed in smartphone performance ranking.

The above data reflects the changes of smartphone performance of August 2016, for more information about the ranking list, please subscribe Cony Ann’s WeChat AnTuTu_Benchmark, and check in the menu of “Antutu score query”