2.Data sample: the average score of each model(not the highest score)

3.Data amount: At least 2000 data sample for a single model

From the average scores of Antutu backstage, we can see that the top 10 are the following models. 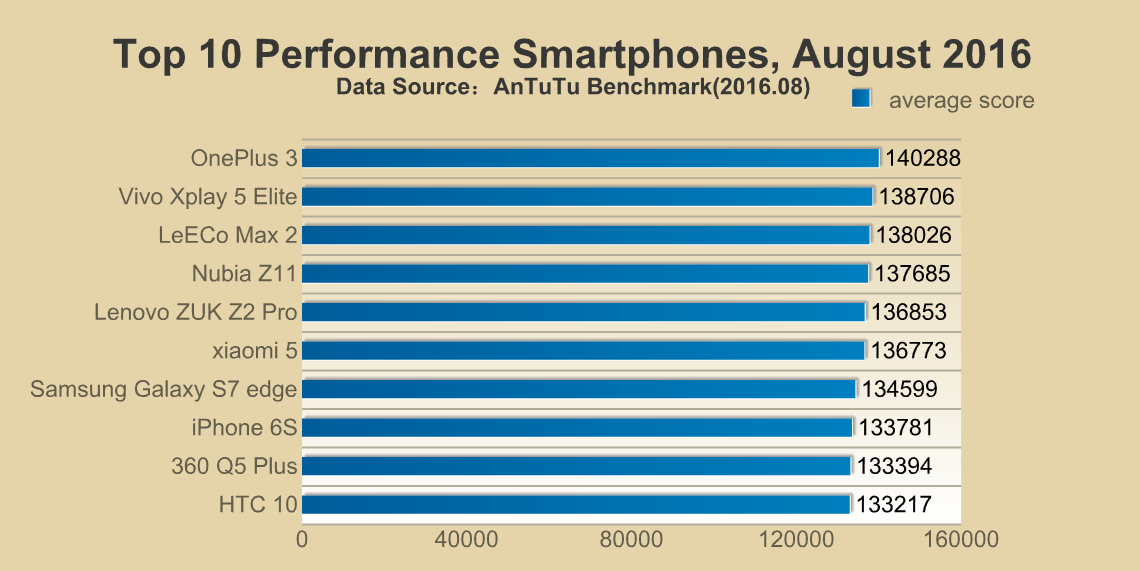 Compared with the ranking list of July, the top three are still Oneplus 3, vivo Xplay5 Elite and LeEco Max2. Oneplus 3 has claimed the top position for three consecutive months with the average score of 140288. Vivo Xplay5 Elite has outstanding performance as the first China-made mobile phone to be equipped with curved plane screen. LeEco Max2 has excellent configuration with affordable price, which made it a highly cost-effective product. The top newcomers to the expanded list also include 360 Q5 Plus and HTC 10 .

360 Q5 Plus ranks ninth with average Antutu score of 133394. This model adopts Qualcomm Snapdragon 820 CPU with the highest clock speed of 2.15GHz, 4GB RAM and 128GB ROM. The selling point of this model is security. Apart from its own 360 OS security system, it also uses bank level security chip. In consideration of the severe telecom fraud cases, this model definitely has competitive advantage over other models. Those who care more about security and performance can consider this model.

The above data reflects the changes of smartphone performance of August 2016, for more information about the ranking list, please subscribe Cony Ann’s WeChat AnTuTu_Benchmark, and check in the menu of “Antutu score query”